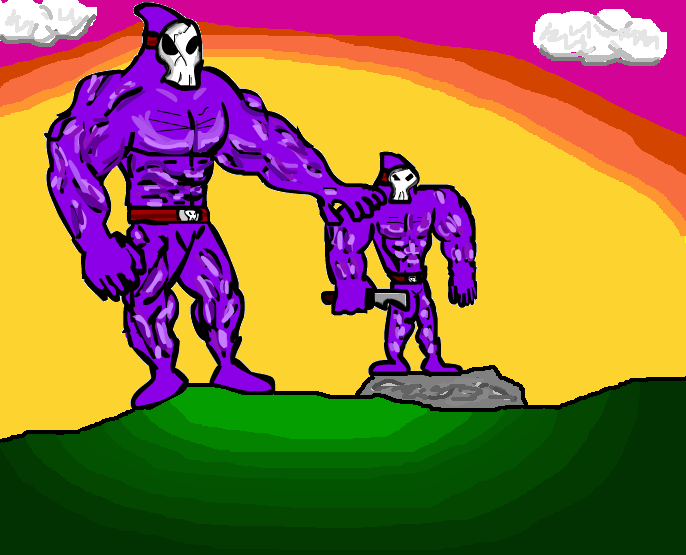 Here is Dad and his kid by a sunset.

Not a bad attempt, especially on MS Paint.

First let me say my favourite part of the entire piece is 'Dad'. He's proportioned well and coloured relatively good. I particularly like the simple shading on the mask. Simple, but effective.

But then we get to the little guy and it dips in quality quite a lot. I don't quite get how you managed to pull it off on Dad but not the little guy. He's just a smaller version, but his proportions are a little off. The shoulders are way too broad for that thin a body - Look at his right arm. It's as big as his torso.

Of course this being MS paint it can be quite limiting. Attempting to get the shading right can be tough - it makes some parts look too 'busy'. Without the proper shading effect what you get it just lines on top of lines. Now, if the image were blurred or the lines were blurred it would be fine but the lower part of Dad's body and his legs are far too busy. But then again, taking a step back it does work. You get where I'm getting at though.

I've messed with MS paint attempted shading before and I can suggest one thing. You can really get custom with your colours. So what you can attempt is a 'rough shading' with thicker lines as you've done and then go deeper in, select more intermediate colours, and shade the shadings. Smoother blends are possible.

I'm impressed with the image of Dad. The rest of it seems to be much lower in quality which makes me think that you spent a lot more time on Dad and less on the rest. If you're going to do backgrounds, put the same effort into them. If not, just do Dad and pop him on a plain background or something.

Thanks for the review. I will attempt to improve my shading skills and evenly work on all parts of the picture. If I do so, then I may just become awesome...

but, like he said the sunset could use some work over and all i like anything dad n me 9 out of10

Yeah, I rushed the sunset.

But the sunset could use some work. Keep it up!

Hey, glad you like it, I will try and do better with backgrounds.