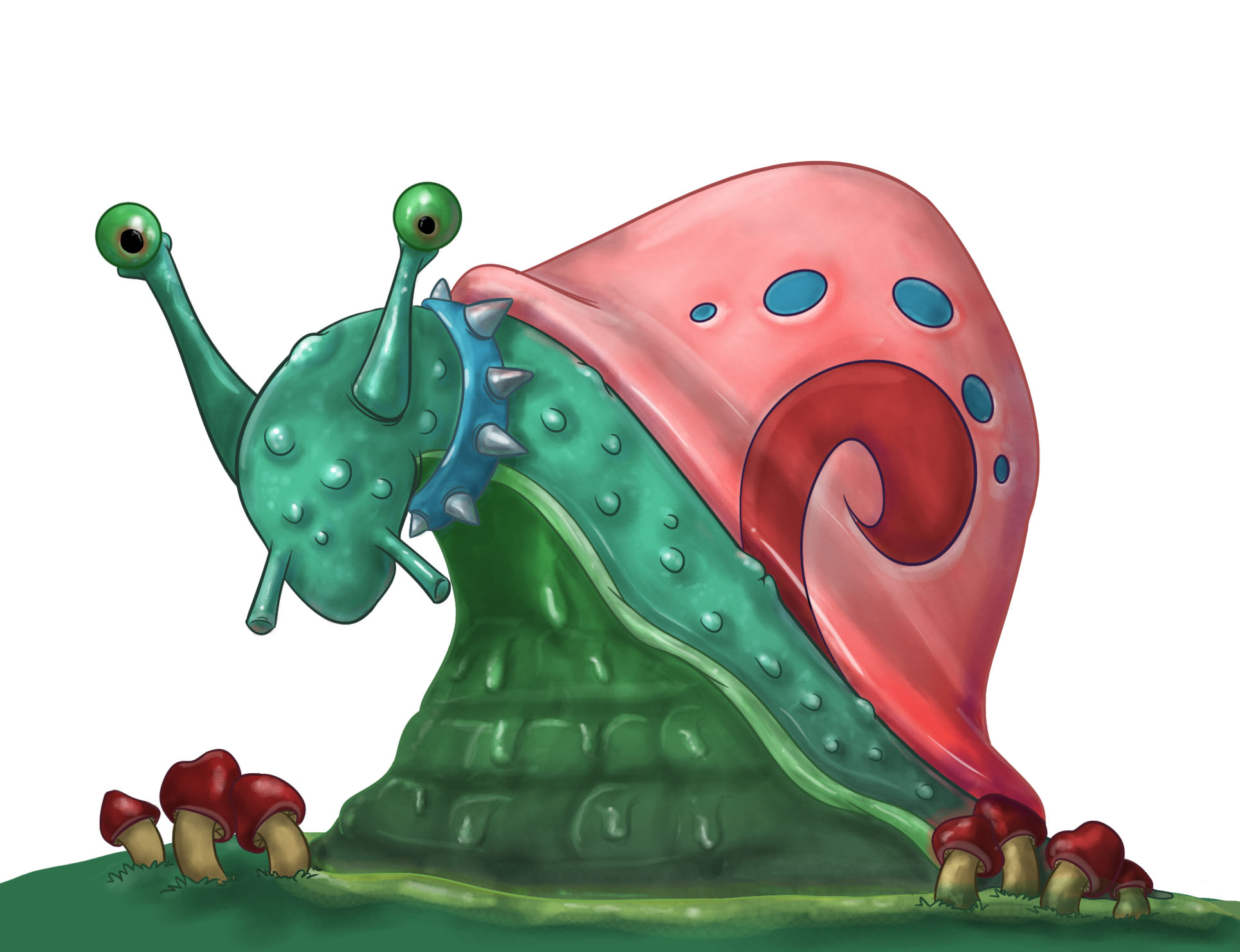 Gary will one day eat spongebob, it's only a matter of time.

Surely this only stands to impede the snail (Gary or not) from living as a snail, impeding him from retracting into his shell. Like putting a chastity belt on a whore, in essence.

You had a good stab at making a background, but there are still large expanses of white that need to be dealt with. I like the way that it looks and I would love to see you take this further, so work on filling in the background for starters, as that would help so much.

Yes, the snail looks badass - I've never seen one rear up like that before, but I'm open to new ideas. You could have made the curve on the shell more pronounced, both the red one on the centre and the pink exterior of the shell, rather than making it square, with rounded edges. Finally, as a nod for detail, consider making both of the pupils the same size.

The most awesome drawing of Gary I've seen so far. In my entire life.

You can immediately see that it's not a rushed piece of art. What you often see with drawings of cartoon is that they are drawn in a really basic style. This is easy to do, as the cartoon character is basic itself. That is why I like it that you made a pretty realistic illustration of Gary.

The realisticness really works, as you can draw really well. I really love two things about your drawing style: the variation of lighter and darker parts in the snail, and the lighting. The variation between the lighter and darker parts is something you don't see that often as well. For some reason it makes it even more realistic.
About the lighting, I love how you put those small white light dots on the snail. It gives the impression that the snail is liquid, which is probably what you wanted to do with it.
I also wanted to say something positive about his belly. Because it is a bit more vague, it looks even more slimy. Nice work on that.

It's still not perfect though. For a snail, either a nature background or a water background would fit. At least not a white background. It's the only part of your painting you didn't invest time in, and because of that it draws the attention a bit from the snail. Just a basic background with lighter colours and the same drawing style of the snail would add to the picture I think.
You do have the mushrooms and grass though, so it's not that you have nothing.

The only thing I see on the stail that is a bit odd is the eye stick. If you could make the transition between the stick and his head a bit smoother instead of a straight line, I think it would be more realistic.

Thank you so much for your review. I appreciate both your kind words and your honest review, hopefully in the future I'll be able to get back to this image and add both a background and fix up those eyes. Thank you for commenting :)

Good piece of art, the goo on his stomach doesn't really match the style of the rest of the work though; also love that caption :D

I'm glad you like it. I fixed up a couple of things, so hopefully the goo looks better now. Enjoy.

Theres' the episode of Spongebog you'll ever see. I like where you're going with this.
The lines for the stomach go through the slime. My suggestion is to suggest the stomach through shading rather than the lines. I would also recommend a background.

Alright on it, thanks fo leave a comment. I would love to add a background but personally I don't feel competent enough to add one without fucking up the whole image, but I thank you for your comment and I assure you that if some day I get good enough at background I'll go back and add one to this piece.