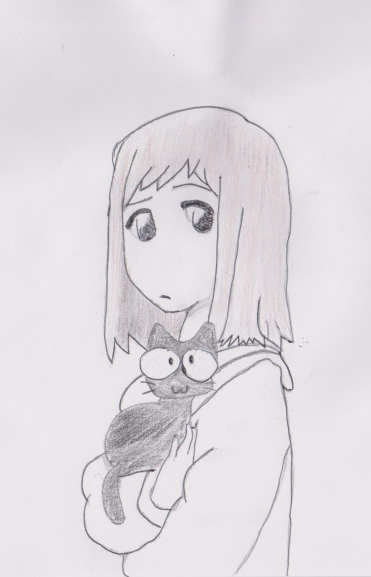 I had to look up the name, by the way.

How does one respond to fucking robots coming out of one's head, followed by repeated bashing with guitars and a motherfucking hundreds of meters tall iron on a hill? Well, this.

It's Mamimi Samejima from the awesome series FLCL (Fooly Cooly, Furi Kuri, whatever). The show's only 6 episodes long, and... well random, so I pretty much recommend it.

Also, sorry for the long wait, I could not get myself motivated to finish the sketch. It's because of that it may seem rushed (the final step did not go entirely smooth, but nothing to be done about that).

I think you really captured a lot of the style and charm from the anime, which is my favorite one ever. Well done!

Yay :D, it has been uploaded!
I saw the earlier drawing, as you may remember. Quite nice picture, as I may say.

But there are indeed a few cons (pro's too, but that's later on).
First of all, some minor faults in the fine-lining. Some of the "roundings" (for example the girl's hair/ eyes of the cat) are a bit too hooky, if you know what I mean. Maybe you could try somehow to soften it.
Two, I think the lack of color/grey-white shadows here is quite a con. The drawing is too empty, in my opinion.
...
That was it I think. Though, I am sure there are more tiny, tiny cons. But my awesome eye only just missed them ^^.

Pro's indeed, are the eyes. I like the eyes. If the original maker of this character meant her to be cute, he did a right job on those eyes :). And you drawed them perfectly in that way.
Rest of the graphical/drawing stuff is good too. The hands worked out very well, but that's partly because almost all the hands I try to draw suck :P.

Keep up this wonderful work, but don't mind to try more difficult stuff (and colour them, but that could ruin the picture too, I know that).

Ah, finally someone noticed... The hands really were a bitch. Thanks for the review, Sammetje. I'll keep in mind that the background needs to be added to the next drawing.

It's well done with effort, but there are a few massive cons.

First I'll say that you've done quite well (much better than I can) in (re)drawing this cartoon-ish human(?). The most basic of skills seem to have been used here and the eyes and forms appear accurate. There's little need to change accuracy of the shape as this one is already pro-like.

However, I instantly find an immediate con: the lack of background. What I mean by this is that the background is only white, and there's nothing special going on in the background. If you (at least) add a clear night sky behind the character then the drawing would appear much more 'full'. Adding at least a background can upper your overall score from the majority.

Another con: no color. I already know your situation atm as you've told me before, but you might want to filter in colors to the pic. Some people, including people that dislike black-white sketches, might provide low scores to non-colored pics, thus I recommend you to use some coloring material (I dunno, crayons?).

Next: no nose? Is the character supposed to have NO nose? I don't know the original character thus I can't rate this. However, I convince you to add a nose.

Last, shadowing on the cat appears foul as a section is darker than the other. I don't know if it's meant to be like that, but try to do the shadowing with the same pencil, method, etc. Don't alter methods as this can ruin your shadowing effort.

Overall: 2/5 stars. Not your best IMO,but not the worst. I believe you shouldn't rush the project. Obtain inspiration before you draw it; don't force yourself.

Actually, she's supposed to lack a nose in this picture, since in the series, it's quite a 'wut' moment. You know, anime is strange like that :P

I did add some small color in the drawing, though it's very subtle (her hair). I will keep doing that, but I'll add a little bit more.

The cat is by the way supposed to be black, the darker section was an unfortunate mistake with the pen :(

Thanks for the elaborate review, I'll take my time for the next one.

Well, its nice and simple, I can't see anything bad about it.
Though Id like to see some details in this :)

The original picture was pretty simple to begin with. I'll draw something more difficult next time :P

I like this piece for its simplicity. It's just a nice little cartoon. Might I recommend darkening the lines though? Another thing that I would take note of are the eyes. The left eye looks as though there should be a bit of nose blocking it, or that it should be angled differently. It makes the character's face look a little bit off. With that said it doesn't take away from the overall picture, because I understand that it's still a simple cartoon. Overall, 2.5/5! Not too shabby! :D

I've been darkening the lines, but my best pen dried out. I've got no excuse for it, really. I'll have a better one next time ^^
Also, the original picture was like this and I did not really feel like changing it.

Thanks for the review, stay tuned for more!