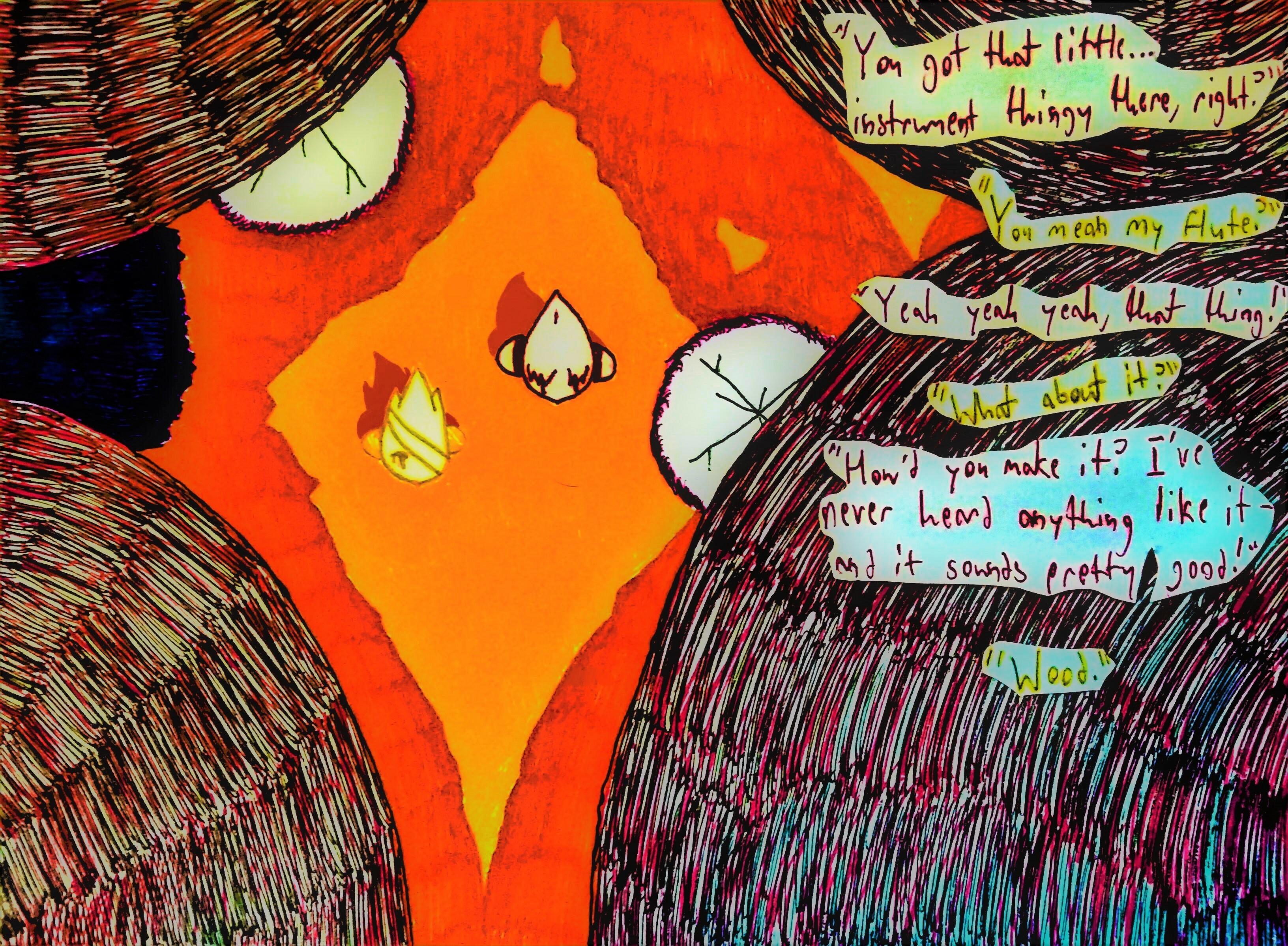 "You got that little... instrument thingy there, right?"

"You mean my flute?"

"How'd you make it? I've never heard anything like it - and it sounds pretty good!"

Kolnuo wasn't sure how to feel about this kid.

They had embarked on their - presumably - short journey only ten minutes ago. The grass underfoot and the rhythm of their combined steps provided a kinetic backdrop for their patient trek.

"So... how big, about would you say this forest is, y'think?" Cole asked as he casually maneuvered around a bush.

From Kolnuo came the simple reply, "'Bout one hundred and one nazuons each way."

The kid was curious, for one thing. That was something Kolnuo could appreciate, on it's own terms. It was something that he'd wish more non-priests had - at least, where it counted.

"'Nazuons'?" Cole asked with a tilt of his head.

Cole simply shook his head, before he said, "I... don't know what those are either."

Of course, that's the kicker, isn't it? So curious, and if what he overheard Cole say to Azuo was overheard correctly, *not from around here.*

Cole furrowed his brow, and nodded with his hand on his chin.

"Alright, fi- Wait!" Cole interrupted, "How about this - how long would it take to get from one end to the other?"

Kolnuo sighed, before he replied with, "About... hm, a little more than a week? Maybe a bit more, you'd probably be stopping off at a town or two."

Kolnuo didn't necessarily mind educating this foreign individual, but he had found that he was beginning to find it somewhat tiresome. After all, it wasn't every day that one had to explain the very bare basics of life to someone who just... didn't know.

As they continued and sunlight filtered down from above, they found themselves surrounded by the sounds of the forest. This far off the beaten path, the sounds of animals - both distant and near - began to be heard. The sound of a breeze through the leaves, and of life in the trees, permeated the air and glazed it with vitality.

"So..." Cole started again, as his voice was mixed into the potpourri of sound around them.

Cole watched the sun flicker, blocked and framed by swaying leaves, as he asked, "You got that little... instrument thingy there, right?"

Kolnuo looked down at his hand.

"You mean my flute?" he said, before he held it up.

"What about it?" Kolnuo asked, with a raised brow.

Cole looked at it, with it's tubular shape and various holes, before he answered Kolnuo's question with a question of his own.

"How'd you make it? I've never heard anything like it - and it sounds pretty good!" Cole said.

"Wood," came the short reply - accompanied by shrug - as the two of them continued on their walk across the forest floor.