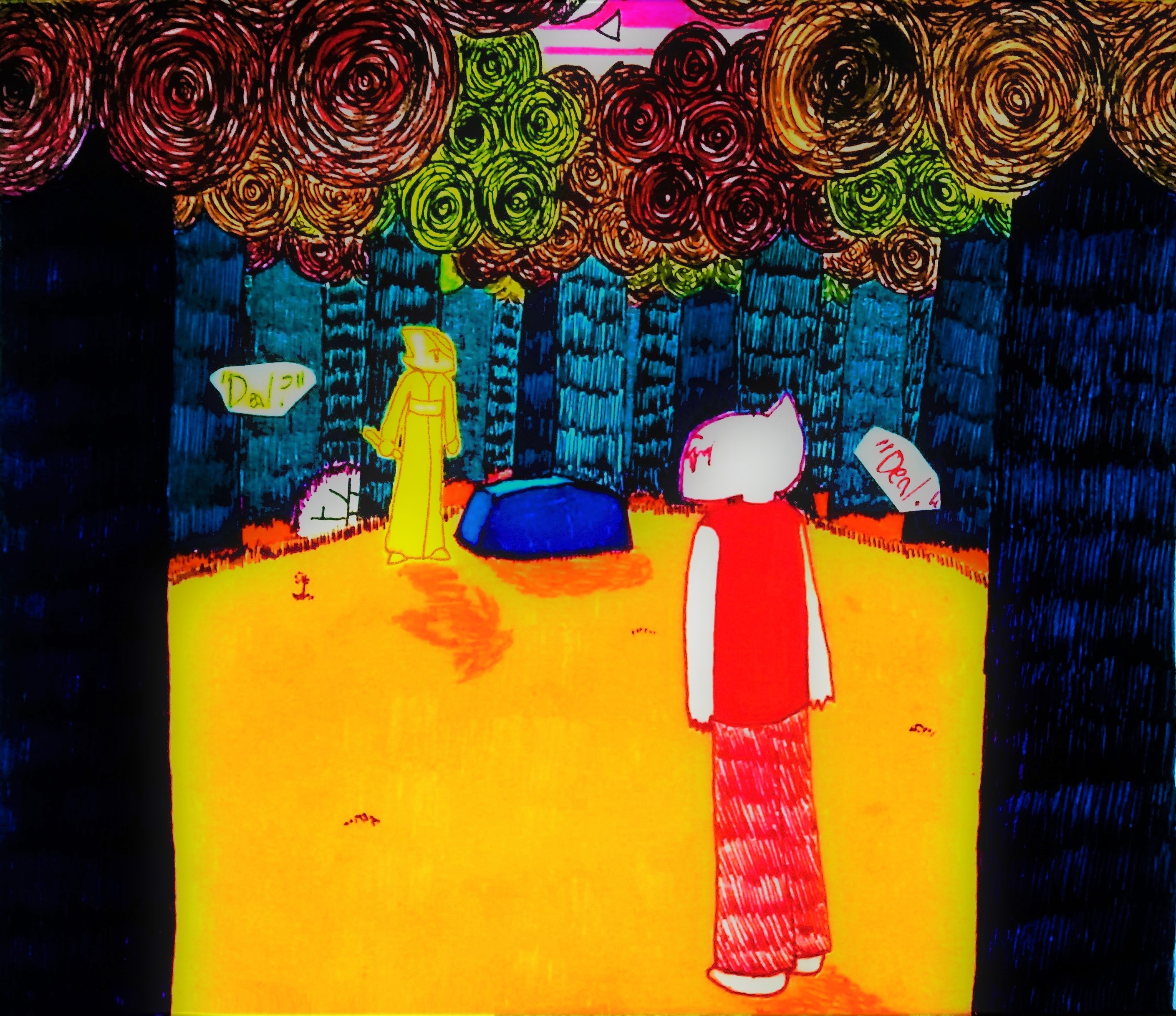 Cole stood, for a moment. The sound of the instrument - whatever instrument it was that Kolnuo was playing - captivated Cole in strange way. The notes were like any other he had heard sung in the traditional Choko style - albeit without the vibrato - but the timbre of the instrument itself was, in a word, unique.

At least, to Cole's ears.

Still though, as pleasant as Cole found the music coming from his cloth-bound compatriot, he knew that he couldn't simply stand there and listen to melodies all day.

So, Cole took a step forward.

Fairly immediately, the music stopped as Cole's foot softly compressed the grass below. The sudden cessation of sound left the air on the small hill vibrating with a sort of life of its own.

"There you are," Kolnuo said, his back to Cole, as he slowly stood up from his perch atop a large rock which stood at a central position at the top of the hill.

Cole watched the priest as he turned around to face him. "I should be saying that to you, dude - what happened to you guys?" He asked.

Kolnuo tilted his head and shrugged.

"Some... concerns were raised. A certain someone brought up a few good points, and so we had to go take care of it," the bepatched person stated casually.

Cole scrunched his face up, and replied, "Concerns? What happened?"

"Don't worry about it," he said, as he absentmindedly twirled his flute between his fingers.

Cole looked off to the side with a furrowed brow. Cole wasn't sure he liked the sound of that - though he wasn't sure if saying anything about it would be the right move either.

Kolnuo just raised a brow, and gestured to continue with an, "Okay."

"I don't know where I am, 'an! And uh, as much exploring as I do, now that I know other people live here, I'd kinda like to, y'know, brush up on some local culture let's say, y'know?" Cole began.

"So I don't know if you guys rock more like the Kotsko Anar where you all live in a spot, or if you're more like where I'm from where you're on the move or what, but if you guys got some kinda place where you're at for now, I'd be pretty happy if I got to see it."

After that, Kolnuo crossed his arms, and closed his visible eye. Cole wasn't sure how to interpret this, but it wasn't too long before Kolnuo opened his eye again.

Kolnuo looked Cole up and down twice. Then, he tilted his head, and said, "Tell ya what..."

"Since you went and got back that bag for our people, I'll let you stay for a few days where we live - I got that kind of clout," Kolnuo stated fairly decisively.

Cole let out a little, "Yes!" with a full fist pump, but Kolnuo cleared his throat.

"Hey there, I'm not done yet kiddo," Kolnuo began, before continuing, "Because if I take you, I'm gonna need you to agree to something, alright?"

"Okay?" Cole followed, with a tilt of his head.

"Any kind of statues, any kind of writing, any kind of anything that looks like it could mean something to somebody... ?" Kolnuo started, as he looked off into the sky.

Then Kolnuo looked directly at Cole, and pointed his flute at Cole in a dramatic fashion, before finishing, "Don't touch it. I don't care how curious you are, I don't care how enticing it looks - you can ask questions, you can talk, you can do whatever you want, but no touchy touchy, okay?"

Cole thought about it for a second, before nodding and saying, "Okay."