Look at my cute little toy... 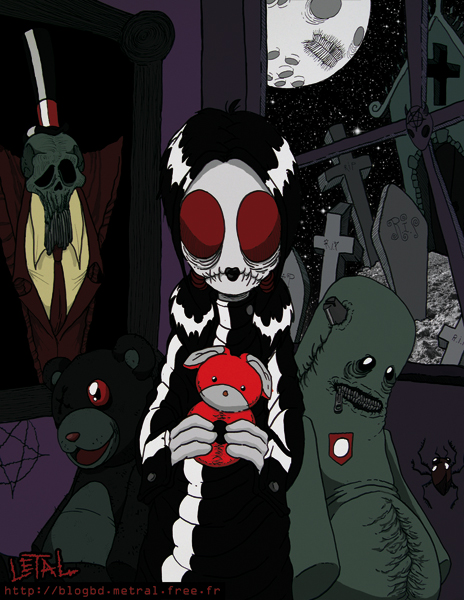 I could have sworn I saw this character one time before, but I can't remember where. It seems a lot like something Jhonen Vasquez would create. He was known for having a really dark style of drawing with a lot of detail. What was awesome about this was that there was such a wide variety of weird creatures in this. The most disturbing one is probably the green blob toy thing. It looks like it had its lower half slashed like it had a C-section!

I'd say this takes place on the Moon, but I can see the Moon literally grinning in the background. I now believe that it takes place on a meteor near the Moon. It seems like everything is slanted so much. It's amazing how much of an odd world you can create with a single image. The toy the central character is holding looks like a red doughnut! Even the stars are very well detailed.

Also, I feel like these type of characters should move. Ever thought of doing any type of animation?

Yes I do animations but nothing really interesting for know. But I will post animations as soon as possible.

Yhis is the best drawing i have seen on NG so far! favorit!