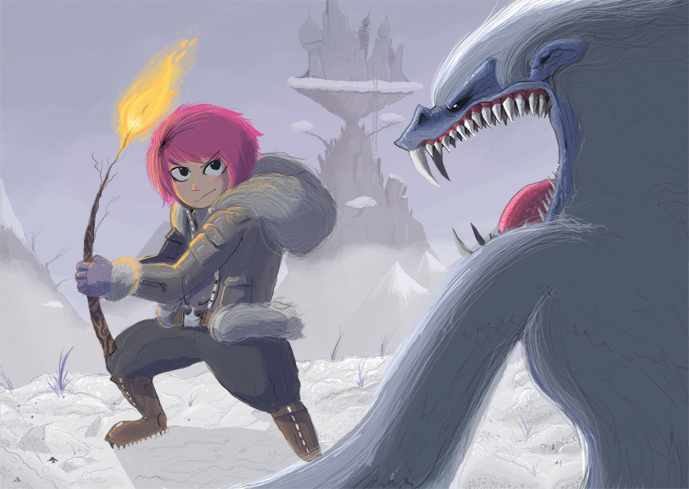 inspired by a billion things but wind waker is probably the main influence. all done in PS CS3 for a change, probably my best painting so far!! enjoy

-her belt buckle is themed after a panda and was originally a hair ornament
-the ref for her parka is one that i actually own
-when i painted the two characters i had no idea what the background was gonna be - it went from a street to tundra to, finally, a snowy cliff edge

When I first heard the title, I thought it was going to be a duel between Santa Claus and Frosty and/or Jesus. I'm still rather delighted to find out it's a very nicely done picture. It's stuff like this that truly makes me think about classic paintings. My mom is a huge fan of them and learns about them all day on the Internet. In fact, that's probably what she's doing right now, as I'm using my brother's laptop. I like how there's fire in a land of snow.

I also like how monstrous the snow monkey looks. You get some really good shots of how big his jaw is. It's a face that gives you the notion that someone is ready to eat somebody else. All of the little details in this are nice, like the castle in the background. It's hard to even tell if that's an arrow.

How did she make a fire in the blizzard?

Its the little things...

most people dont make the background a big deal (many works don't even have a background) but this one is pretty epic, makes me want to think that this isn't just a stand alone picture, like there's a whole plot and this is just an image from it.
Also, I like how you shaded in every tooth and shaped his gums to make them realistic.

...really bad place to put a city.
She doesn't seem too worried about becoming abominable snowman food. I'd of pissed all over myself with that thing roaring at me with the only object in my hands for self defense being a three-foot, twiggy burning stick.

Nice style. NO IT'S NOT NEOANIME, DAMNIT! AHHH!

No, I don't think so. What the hell is neoanime anyway? Doesn't something have to be...animated to be 'anime'. I believe they meant "manga," and if they did, I still don't understand what neomanga is, and, *any*way, this doesn't look manga--which is a good thing.

Damn kids and their manga fad. Back in my day, we were lucky to get stickfigures. Stickfigures drawn on stone tablets with charcoal briquettes...and we didn't have fancy-prancy "erasers," either. if we wanted to draw a new picture, we'd have to lick it off.

But, yeah, nice drawing 'ills you got there, home skillet. Keep at it. You gets an 10 from me.