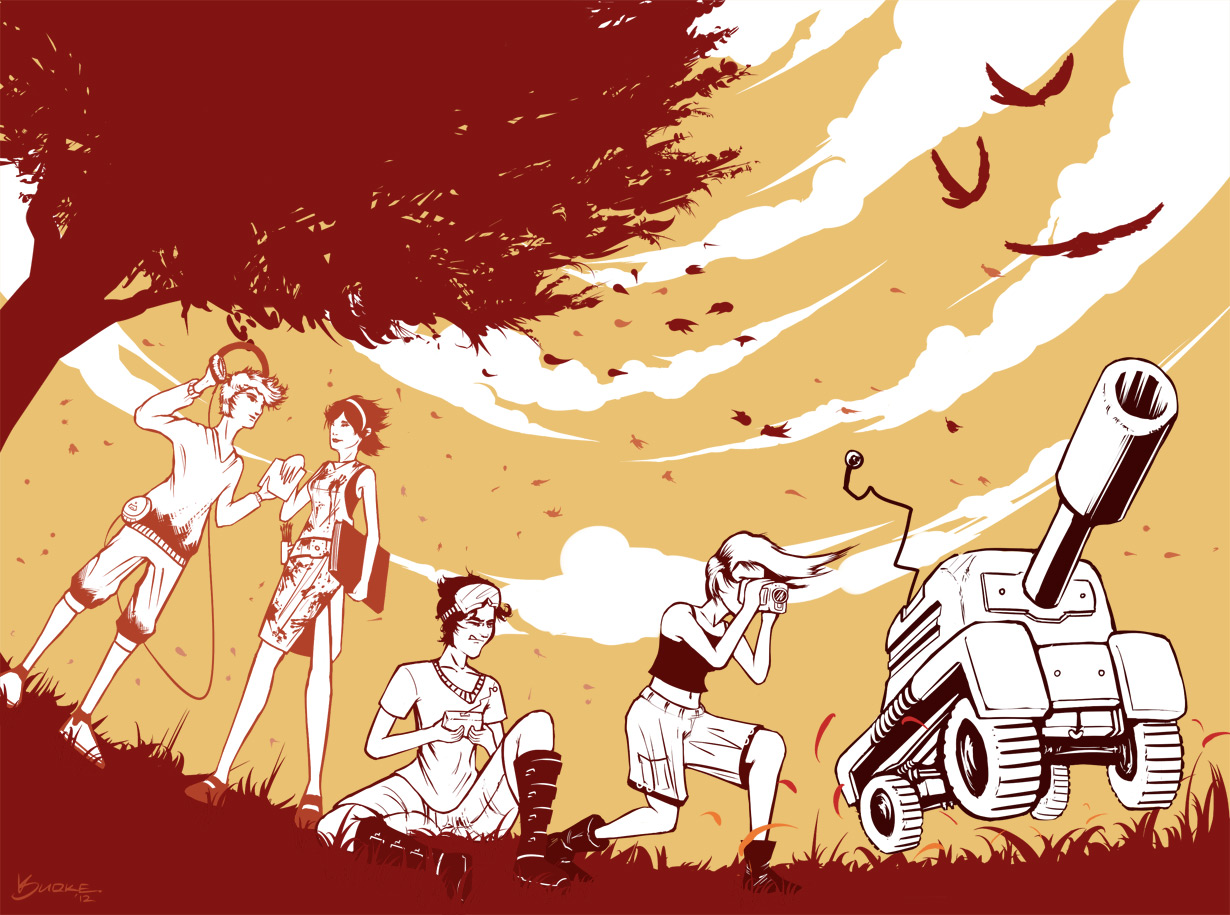 Nice scene dude. I knew the tank was an RC just by looking at the antenna. Took me a while to figure out the theme here. From left to right Music, Art, Games, and Video. What you find on Newgrounds.com

Awesome work on this one. It's nice to see the characters in a different genra style. Lets see, Pico, Nene, Tankman? Not sure who the other girl is but I may have missed the flash.

That took a while...

It took a while until my mind understood that the tank is really infront of the people. Of course the hints are clear but my mind insisted on seeing it standing next to them. Things closer to the viewer have a higher contrast, once you get that it's so obvious that you can't see the tank next to them anymore. And of course, the fact that the grass is behind the tank is a good hint too.

Usually I would say you could move the tank a slight bit down so it's easier to make out that it's in front, but I see how the composition is so important and so strong in this piece that moving the tank might be a problem.

It took a while until I got what's going on overall. At first I thought 'Ok that's Pico and Nene in the back... probably... and the one guy wears Tankmen glasses... but who are those other two?'. And judging from Izzy-A's comment I am not the only one who asked himself that question. But then it struck me like a lightning bolt.

OF COURSE they represent the four portals! Guy listens to music, girl is an artist, gamer controls the RC tank and the other girl is filming it. Now that I got this this, I like your drawing even more. Trust me, I am not the only one who didn't get it, so it might be a good idea to give a bit of an hint towards it in the author comments. Although the title is a good hint already and helped me understand it.

Before I got the concept, I already loved the art. The color scheme is a pleasure, it's well composed and of course, it's very well drawn.

It also works good for an autumn month for the calendar, that was a nice decision and implemented persuasively.

Good luck for the contest!

When an image is distributed, the chances of an artist statement to remain attached to it at all times is highly unlikely. I can only hope that others, like you, can grasp the concept without being told.

The style is great and I like the way things are distorted. I'm not sure if I can tell who the two people are in the middle, but doesn't matter too much I guess. I really like the clouds