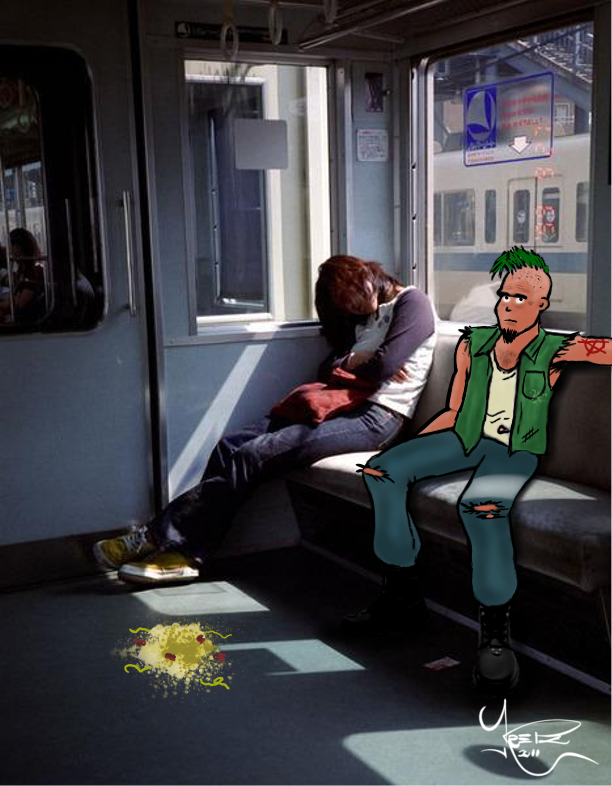 I went on a train in downtown
A old man caught my attention,
Army boots bleached, Mohawk lowered
He had an "A" tattooed!

I'll tell you how anarchised
In the70s I freaked
Fucked all rocka billy girls
He sang in a band, spoke shit

On the radio did not play, not passed on TV
But in woodstock punk scared!

i love that combination of photography and illustration! why didn't i think of that?! brilliant! (and i love punk rock)

and after giving a big presentation to a panel of art judges for my work about the history of punk rock, i gotta correct you about the 60's. punk rock has it's roots in MC5 and The Stooges in the LATE 60's in detroit. of course, they weren't punk at the time. Punk rock began to develop in the early 70's in new york with bands like the ramones, talking heads, blondie, etc. Malcom McLaren, a British fashion designer, tried to create the fashion for the New York Dolls, which failed. he then went back to london to create a clothing shop called "SEX". he wanted a way to make his clothing popular, so he recruited a couple kids who hung around his shop and created "the sex pistols" (this is all in the early-mid 70's kids). the sex pistols essentially became the first anarcho punk band. the sex pistols did much better than the new york dolls because england was in an economic rut, which gave frustration to the unemployed youngers who became punk rockers. following that in the mid 70's, a group of kids said "that looks easy!" and became the clash; the true definitive brittish punk band.

so there, that was part of the presentation i gave the judges, and now i gave part of it to you.

anyway, to make sure this comment doesn't get deleted for not being helpful, i noticed that the punk's leg looked kind of flat and i noticed that you used a blend of different shades to create the shape which works on his right leg. his left leg has the light on it so it's harder to see. try a solid line dividing the different shades instead of a blend, this really defines shape.
do the same thing for the puke, the puke looks like a sticker on a picture. by adding some lines (to make it look like a hill side or a mountain i guess) it will begin to look more like a pile than a flat thingy. either that or make it more of an oval instead of a circle to show perspective.

anyway, awesome! love the way it looks! i'll be watching for more of your stuff! come check out some of my stuff to! (are we allowed to use photography in our gallery?)

thank you dearly for your tips, I was very glad you liked it.
sorry for my english, I'm using the google translator.

what I have written below the drawing, a letter is translated from a hard core band here in Brazil, very cool and old.
are you sure about the history of punk rock was in the '70s that started it all, I know.
I translated the lyrics of the song wrong, but I'll fix the decade.

about design: this drawing I made in tribute to two bands here in Brazil, they started the punk around here a long time ago, the name of the bands in English is ''Rotten Boys'' (with music''vomited on the train !'') and ''Screaming H.C'' (with music ''old punk''), both songs are really cool and tell stories that happened inside the train.

It is the first time in drawing up a picture, liked your tips and understood what you said ... I try not to make that mistake again. thanks man, thanks a lot.

we talk soon, I will now check your gear ; )
I hope you understand what I wrote.

i dont know can use pictures in the gallery .