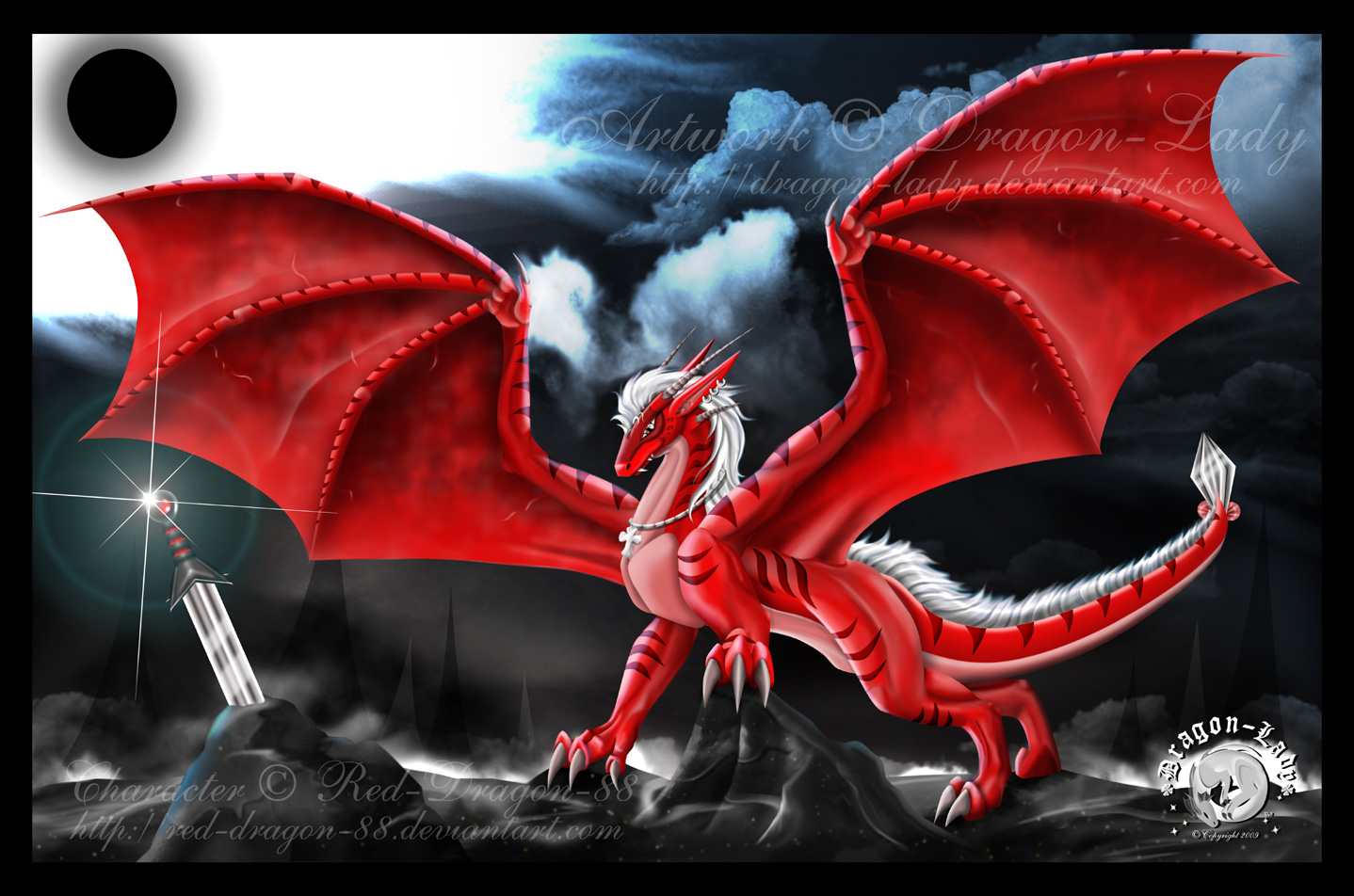 Now this is for red-dragon-88 on deviantART a gift for him. I did some new styles on this picture, like the shine and other detail that you can see.

I looked at the other red dragon-Before the Battle first. See my review for comparison. The two make interesting viewing.
Obviously they are both technically top quality pictures- The kind that could be used professionally. I like the subject matter becuase I like dragons! They should be viewed as what they are- gifts for someone called Red Dragon, which means they should be bold, clear emblems-something he can say "Thats me!" Like the other, this suceeds perfectly in that respect. I suppose one should accept that the way the wings look in perfect symetry despite the figure being at an angle is just a sort of heraldic/emblamic look. It has great shading, beautiful form and good anatomy.
It has just a little more detail in the Full View than Before the Battle, which I like, but still has that slightly unbelievable shiney/perfect look about it I described in detail for BTB.

I think the eclipse idea is not a good one. You may have had some specific meaning in mind, but eclipses just don't look like that. The light doesn't blaze out of a total eclipse round the edge lighting up the whole sky that is not dark clouds. You want to show the flash of light on the sword; you want the blade to gleam- total eclipses are dark, like dusk and the light round the edge is just a sparkle- so it looks like you created the picture and plonked a black disc in the way.

The anatomy is interesting- this one is not human-like, and as such is more to my taste. more like a horse or a cat. Personally, I prefer dragons to be more reptilian, and look less like a grown-up version of a girly drawing of My Little Pony, but that is a matter of our different tastes, not your artistic ability, or your achievement of purpose with this picture!

The background has just a little more to it, which, given that you want us to see it on full view is good- there has to be plenty of detail to see when one does that. the watermark is a little more subtle, which I prefer. Its less distracting and more modest.

Lol, this was a new style that I was trying to master with a touch or my own flow of colors.

Yes I was basing it of a dog, cat and horse like structures, A lot of dragon fans love the human like type ones, I do too. But I prefer making it this way to defined my anthros from dragons.

May bad on the eclipse, see I was trying to make the eclipse as it hits the sun and it does that blinding glow of light. I didn't look at any picture of the eclipse just remebered how it was when I seen it long ago in real life.

I could go on about the perfect coloring, shadowing, depth, and such. i could say that the picture is really deep and means much in many ways. But, i wont.

Ill just say its perfect and stop rambiling on.

I have NO idea what Thor2axe down there is talking about, But he clearly has a problem with it in some way. Stop being Simon Cowels, Thor.

I really love how you made this whole picture shine with lots of details, though the black moon kinda looks weird, but hey that's just my opinion. I still think this is a very beautiful picture that you created.

Thank you, I put a lot of energy into this picture and I love how it turned out.

Thank you for the Reveiw!