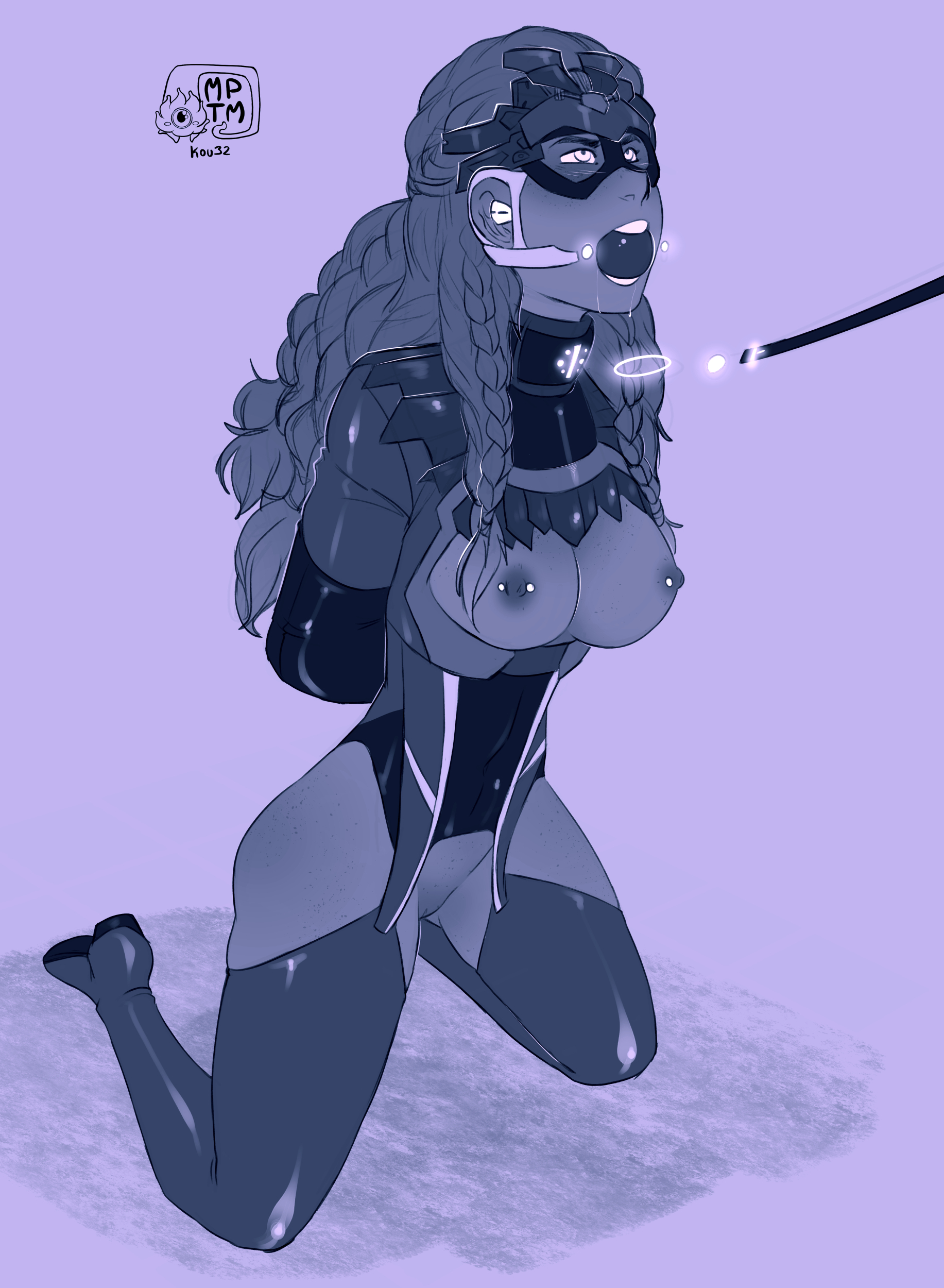 Aloy had just received her Shadow Stalwart armor from Sylens. Tt would be essential for Aloy to traverse the Shadow Carja’s territory without them recognizing her. At least, that was the hope. Not five minutes after she waltzed right into a nearby encampment the Eclipse soldiers recognized her and shouted, “INTRUDER!”

The flame-haired woman put up a decent fight, but their sheer numbers overwhelmed her, and she was captured. Again, “Heh, trying to masquerade as an eclipse soldier? But that hair of your is a dead giveaway GIRL.”

Aloy growled in her cleave gag.

“If we had known you wanted to join us so badly, you should have said so sooner. Since you went to all that trouble to dress like our brothers. We could make an exception to our proud traditions and make you an ‘honorary’ member.” A cocky smirk appeared on the commander’s face.

The encampment was nearby a mostly functioning ruin that had some rather interesting artifacts that the eclipse was currently retrofitting for their newest member. While several slaves attended to the restrained Nora. They cleaned and scrubbed every inch of her body, shaved her neither regions, and spent hours combing, fluffing, and braiding her majestic mane of flaming hair.

Once the Nora savage was considered presentable, she was then marched through the encampment, naked as the day she was born to be outfitted with her new armor. The eclipse hooped and hollered as she passed by, but the proud seeker kept her gaze forward and head up high to try and maintain so a modicum of dignity in her current state. As they arrived at the smith’s tent, she was placed between two poles with her arms stretched taught and tied to keep her still.

First were a pair of thigh-high boots that hugged the curvature of her well-toned legs. Next, was a tight corset that squeezed her toned tummy in nearly three inches and rendered her to breathing uneasy. With a pair of leather garters connecting the boots to it. Then came her chest plate, or lack thereof. A window had been created by rearranging the metal of her stalwart armor, now her heavy chest was fully displayed and supported. Along with a row of jagged metal placed just above her breasts so that any unnecessary struggling would result in some unpleasant prickling. The sleeves of the armor were them attached the plate and laced up her arms. The Seeker looked at sleeves curiously, not recognizing the material they were made of.

The craftsman noticed her curious observations, “It’s a lost technology created by the old ones. You’ll soon find out how it works.”

Her hands were then untied from the posts, but before Aloy had a chance to react. The craftsman had tapped his own focus to activate signal that made the cloth respond to his command. The Nora’s arms were quickly pulled behind her back by the sleeves obeying his order. Which made it far easier for his assistants to place her arms in the box-armbinder. The straps of the binder were then fed through multiple points in the back of her armor to keep them locked in place.

The guards then forced the Aloy to her knees so her final armaments could be installed. Much to her surprise they clipped her focus back on her right ear. But it would soon be turned against her as a metal brace like devise was placed behind the back of her head that wrapped around her face. Two U-shaped braces were hooked over her ears and attached the brace around her head to keep if fastened in place. She was then greeted with the sound of her focus connecting to the device.

“That can’t be good…” She thought to herself.

Next, a large purple ball was shown to her and then promptly shoved in her mouth. As the hand pulled away, Aloy tried to shove the ball out with her tongue, but her focus beeped again, and the ball became suspended between the two braces at the side of her face. Perfectly filling her mouth.

“Brilliant isn’t it! Your own focus works at the command hub but is controlled by us.” The craftsman boasted.

Next came one of the most import pieces of the armor’s visage, the mask. It was pressed firmly against her face and attached itself to the anchors over her ears, along with a sash wrapped around the back of her head to offer better support. The mask was now perfectly flushed against her face and “hid” her identity from prying eyes.

“We’ll make an Eclipse out of you yet!” The smith cheered.

Aloy looked up at the man and growled, “Im mob on ob yuu!!”

“Ha, as long as you’re wearing that armor you are!” The smith grinned.

Aloy attempted to struggle in the armor, but it offered little to no give, “Dammit…”

The Shadow Stalwart Armor is probably my favorite set in the game. It looks awesome and it lets you enter into enemy controlled areas without them attacking you. But, I always felt like she was still pretty recognizable in that set. The flaming hair is kind of a dead giveaway XD

A big thanks to: https://twitter.com/Rara_10tacles for bring this together!

Glad to hear ^^
It is definitely on of the best armor sets and it was perfect for a re-model.