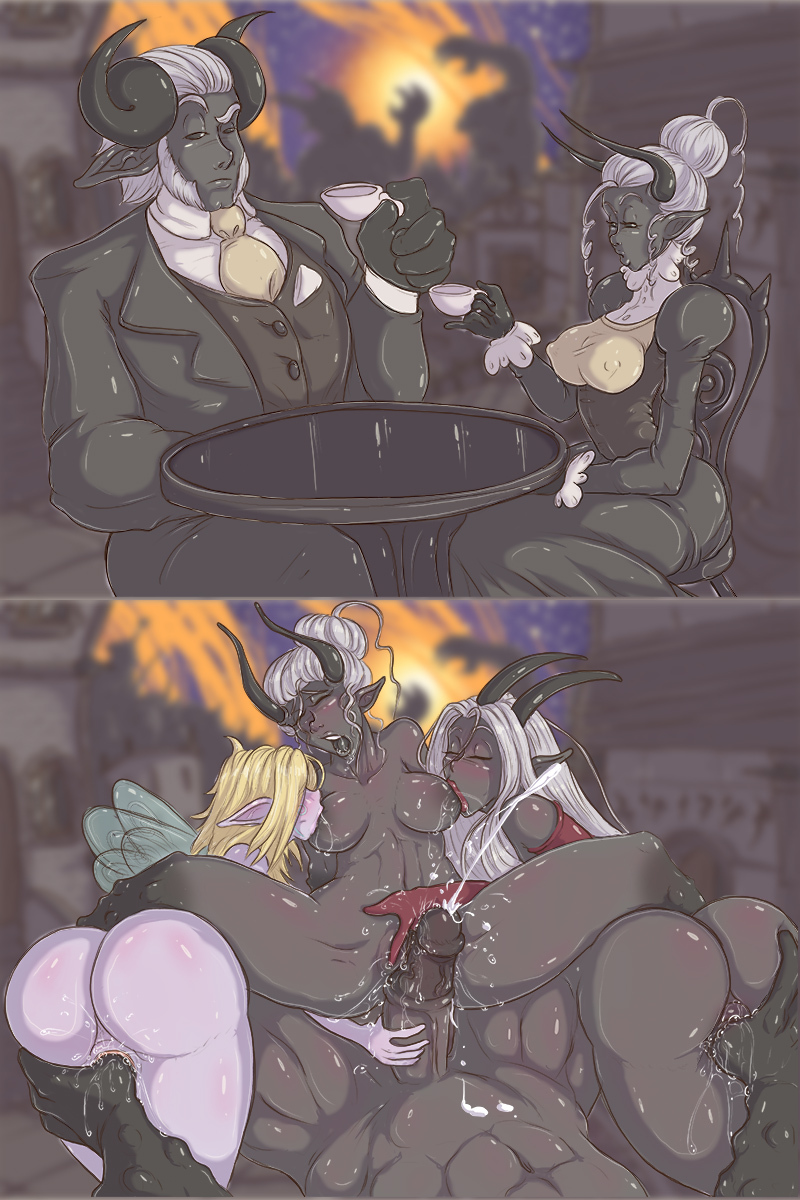 Hell's Macroeconomy (event of the week)

Event from chapter 2 of Elana, Champion of lust.

EVENT OF THE WEEK (Hell's Macroeconomy):

Elana spots a couple of demons having tea in what looks like a sort of fancy tavern. As she approaches them, the couple gives a slight flinch while pretending to ignore her.

“Do you want more nails to your eastern toxines tea, my dear?” The man asks aloud to hide his muttering, unsuccessfully trying to not draw the attention of the fairy. “Don't stare at her, my dear. She must be one of those dirty anarchists from the sect of love asking for some shillings. They'll do  anything to avoid working or getting a proper job...”

The woman nods, giving him a knowing look. “Yes, thank you, my dear. The taste of the eastern tea always gets better with a good pinch of rusty nails,” says the demon woman, visibly overacting.

Far from taking the hint and leaving them alone, Elana decides to approach them and, perhaps, annoy them a little bit, just for fun. “Hello!” Happily says the fairy. The man closes his eyes and growls while leaving his cup on the table and turning to face Elana. The man opens his eyelids slowly. “Pardon?” He says with disdain.

The Spirit communicates with Elana. “Hey, I've learned a lot of their society by reading this codex. I'll tell you what to say, okay?” he transmits. “Good, these people are quite weird. Just look how he's staring at me... He wants to make fun of me,” Elana mentally transmits.

“Oh, talking! Sure!” Says the man scornfully. “What you want to talk about? Macroeconomy? Politics? Perhaps the new discoveries in biotortures? Or, perhaps, about all the drugs you're doing?” He asks.

“Huh... I'm interested in a little bit of this and that...” says Elana. The man nods. “Well... What do you think of the new methods of harvesting souls that are being practiced in the southern territories? If what they say about its low cost of production is true... What consequences do you think it will have on the local producers?” He asks with a smile.

Elana listens to the Spirit and repeats his words. “I'm sure that this will cause a lot of problems, but, at least, this will result in some changes. From my point of view, there are two ways to address the problem. First, apply some taxes to the southern exports... This could work, but it would be only a short-term patch, no one would be happy about it in the long-term...”

“...The second option, which is what I would do... If these methods actually reduce the production costs, local producers will rush to implement them and remain competitive. That would lower the prices, yes, but the benefits wouldn't diminish but increase because many more people could afford cultivated souls.”

The demon stares at her, scowling, with an expression halfway between surprise and confusion. Suddenly, he gets up and brings another chair at the table, offering it to Elana. “It happens that I am a local producer and your opinion on this issue concerns me, greatly,” he says with a broad smile.

With the help of the Spirit, both discuss various issues, extensively. The female demon, who seems to be both, business and sentimental companion of the male, quickly joins the conversation. They speak about different subjects, one after another, and the demons switch their teas for some stronger drinks.

Time passes and the general mood is quiet and joyful. The couple seems to begin to establish some friendship with the fairy. With trust already earned and the warmth from the strong drink, the rubbing doesn't take long to appear, and Elana begins to do her techniques from under the table.

Elana nods. “I was thinking of Lilithela...” she says. The couple exchange some stares, blushing, hesitating between keeping their conservative ways or letting themselves into the desire. “I'm not sure if that... would be appropriate...” Ponders the male demon.

Elana punches him on the shoulder. “Oh, come on, Beltegoroth! You're asking for it! Who could think that a full-fledged demon like you, would be so scared about what the other will say?” Says Elana to provoke him. The devil looks at her partner. “What do you think?” He asks. The woman bites her lower lip and shrugs as if to say “Why not?”

Somewhat reluctantly, the demons agree, and Elana, leans back and quickly fastens their trousers before getting up and urging them to follow her.

Upon seeing them coming, Lilithela looks surprised. “Wow... I wasn't expecting that...” Admits the woman. “And you...” She says, now addressing the couple. “Too long has past without solving the tensions between us... Too much complaining... it has been... exasperating.”

Lilithela extends her arms, holding their garments from the neck, then she pulls down, shredding their clothes and exposing their naked torsos, a gesture, that now, Elana knows that for the demons it's a clear sign of tenderness. Lilithela breaths deeply, swelling her chest. “Follow me.”

All delve into Lilithela's lair where they give free rein to their lust until they get exhausted. Once they're done, Lilithela approaches Elana while she's cleaning herself with a towel moistened with hot water. “There you go. As I promised,” says the demon woman while giving her a census card.