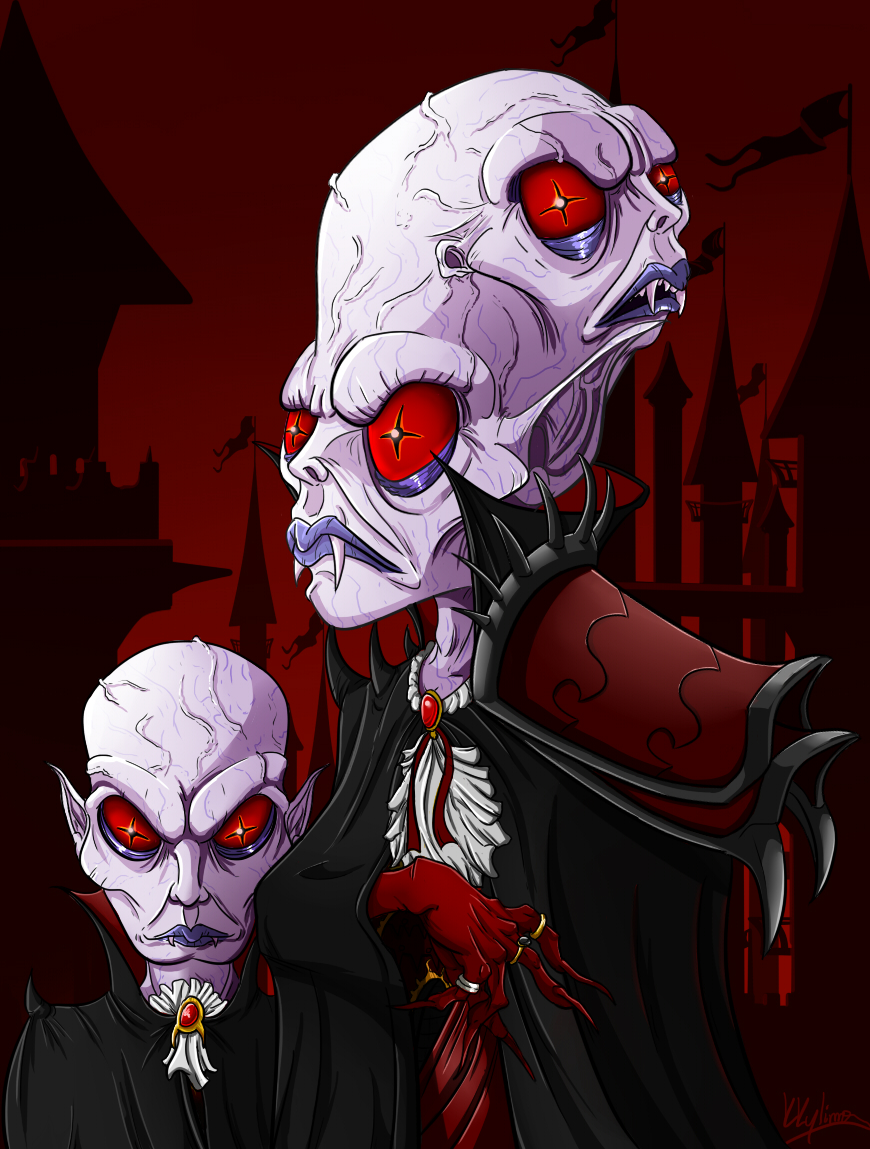 ~Tharad and his siamese brothers Xarad and Uthuno are the last sons of the DiMorteli House. Unlike the common Vampire , the DiMorteli did not leech blood out of their victims but instead drained the spark from inside their minds , drinking their thoughts as if it was a good wine. This process left the victims mindless nulls , puppets to the vampires' will. Furthermore the DiMorteli could manifest several psionic powers like Telekinesis and Mind Scan. These powers , however , were not given to the DiMorteli by nature. In a vainglorious attempt to overcome the curses that scourge the vampire race , house patron Nikolai Di Reus Morteli started a series of profane experiments on his bloodline.

To escape the endless thirst , the hellish sleep-state and the sun allergy Nikolai instructed his sons and daughters in a series of insane training sessions and arcane rituals. The DiMorteli have even consulted with devils , the vampire nation's greatest enemy after the angels. In time , progress was made , terrible progress. Though the Sun Allergy still existed , the bloodthirst and the hibernation shrinked and eventually disapeared. In their place , a new thirst rose , that of the essence that lies in every intelligent mind. The consumption of that essence gave the vampires newfound and great powers. Alas , the price was high. The dark beauty of the vampiric race gave place to hideous mutation , elongated skulls and twisted bodies. The DiMorteli were vampires only in memory.

Such heresy would not pass unseen. The council of Lyrae , highest authority amongst the Houses pressed charges against the DiMorteli , declaring the House Abomination. In vampire society nothing is as sacred as purity of bloodline and respect of tradition. The DiMorteli have forsaken these ideals and now faced their gravest hour. In the cacophony of slaughter that followed , the DiMorteli were overwhelmed by the seer numbers of the other houses. The three brothers in a moment of chance managed to escape the genocide , vanishing into the night.

For ages to come , the brothers lurked in the shade , fed on scraps , kept their existance a secret. Never did they forget , never did they forgive. As the ages pass , the brothers plot and calculate the fall of their former kin , the hated vampires that took away their noble house. In their mind , the council of Lyrae , terified and jealous of the DiMorteli's newfound powers , decided to destroy them instead of following their footsteps to freedom. Cowardice of the worst kind. Yet all is not lost. Tharad , Xarad and Uthuno are great , they are powerful and they have plotted and schemed. Soon , they will finish their father's efforts and a new era will rise , an era of psionic vampires rulling over oceans of mindless slaves. The DiMorteli will reign and those who deny it will see it from below.~

These 3 are characters that i had in mind for a long long time. Now that i finally created them im even more excited about them :p Maybe after im done with a couple of commisions and other urgent projects , ill return to them , who knows. The artwork itself is a milestone in my artistic pursuit since it tought me a load of stuff and possibly changed the way i render my characters forevah.

Here's another simply great picture. I am amazed that you managed to have such a lengthy description of it. Honestly, we do not need a literature portal. I just love this two headed design. It's not two heads in the traditional sense, it's more like Professor Quirrel and Voldemort. The claws are just done wonderfully. I've always been a fan of those.

You really get the idea of the monstrous vampire down. You rarely see those anymore. I love how you made devils the vampire's greatest enemy. I could spend a lot more time just talking about the description. It's all so wonderfully organized.

Thank you very much! Im glad you enjoyed their story too! And as far as vampire design goes , i always liked to imagine them as the incarnation of gothic horror and nocturnal evil. Im not a big fan of vampiric pretty boys :P

This is Really Cool..
Haha! The Head Creeps me a Lot.. xD

Very awesome!
I remember seeing this on a video by Jazza and then you responded to my forum post and I was like:
"Holy crap! Its that guy who did the freaky vampire drawing!"
Now,just a few things:
I love the way you draw the hands.
Your artstyle overall is really fun to look at
And I really like the story in the description,pretty damn creative.

Thank you mate , im glad you liked it! Dont be surprised to see me in the forums , i creep around the place so much that im afraid ill be forced out hahaha !

This is so retarded awesome I can't even

Hahah at first i read "so retarded" and i got worried but then i was like " fuck yeah :D ". Thanks mate!

In your comment section you've outlined a detailed plot synopsis for your characters' world and lore, something that is EXTREMELY rare to see in art submissions and quite frankly it was an incredible read my friend. The names you've given the race and council all sound exotic and "alien" as they should and really gives the viewer something to sink their brain in while soaking up the imagery.

The design itself is magnificent, I mean... elongated skull purple alien vampire creatures? Bloody genius! Their hands/claws are a polar contrast to the rest of the body (that is visible anywho) and makes me REALLY want to know his anatomy under the cloak. The mutated second face on his head reminds me of many B rated Sci-Fi films I've seen :P What do the ladies think of him? How is a fella gonna get any lady action with such a deformity? YOU ARE SO INCONSIDERATE FOR HIS SEXUAL DRIVE MAN. (Although judging by the number of rings, he's either swimming in divorce papers or is quite fond of his jewelry)

If I HAD to nitpick and it really pains me to even criticize so harshly given the passion displayed here, but an ongoing problem I have with a lot of submissions here on Newgrounds is a bland and tasteless background. In this case it gives a Mars theme/atmosphere -I can just envision a giant castle in the sands- but it lacks any detail whatsoever. I understand the focus IS the character(s) as they're in your face up close and personal in the foreground, but there's always room for improvement. Regardless you earned 5 stars from me.

You've managed to stimulate the imagination in such a refreshing way... I WANT MORE, this DESERVES to be made into a full fledged movie animation or comic or SOMETHING, ANYTHING.

QUIT READING THIS, GO SUBMIT SOME MORE, COLLABORATE WITH A DESIGNER/PROGRAMMER
TAKE YOUR 5 AND GET OUT OF HERE
You admirable human being, you.

Ahaha this has to be one of the coolest comments i received on my work! Not only an incredible critique , it also had me roll laughing!

First of all , yes , the background is indeed graphic and does not match the effort i put on the brothers. If you check my gallery you will notice that this is my weak spot atm and its something im trying to overcome.

Im so very happy that you enjoyed the story as much as the characters my friend! It is important to me , especially since i want to start composing my own comics soon. I was very surprised to see that many people asked me to continue creating these folks , both here on NG and in my DA. I like to play with my fans' imagination , give people an image and a story that is a fragment of a whole world. The trick is that , there is only the fragment , so , the watcher gets to create the world in his mind , as he wishes it to be. I think it is both inspiring and interesting.

So , again , many thanks ! I will create more of the DiMorteli for sure , cant let down the people who support me :)