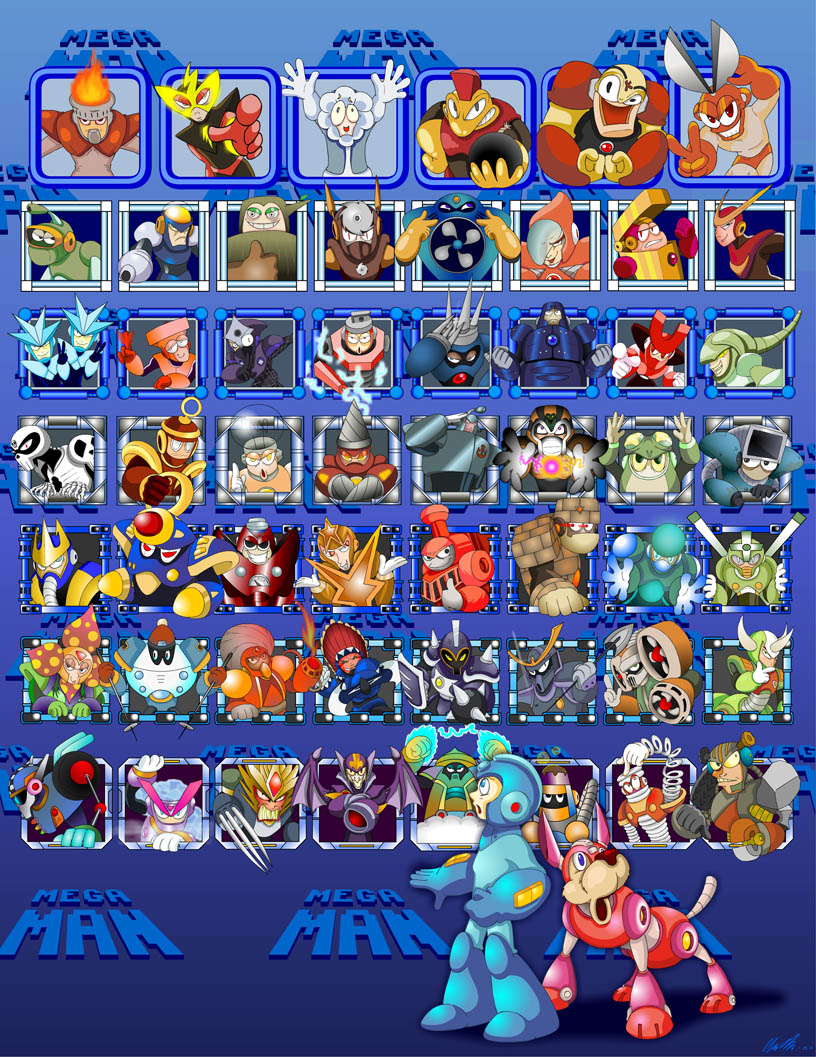 Made this as my entry into Udon's "MegaMan Tribute" art book. Didn't get in, but I still highly recommend you pick up a copy!

So this is every Robot Master from the first 7 MegaMan games. Originally I was going to call this "The Men of Mega" and have a gigantic collage of all the Robot Masters from every single game all in one gigantic picture. I tried a few different arrangements of the "windows" from the stage select screens of the games, with the windows being in different sizes and locations in no specific pattern. Eventually, I settled on a more linear design like the one above, assembling the windows in the order of their appropriate games.

I tried to make each Robot Master as distinctive and unique as possible and opted out of doing -every- single one up until 7, so nothing from 8-10 or "& Bass" unfortunately. Once I assembled them however, I felt like something was missing...so I decided to toss in Rock 'n Rush. I toyed with the idea of having Beat, Eddie and maybe Roll, but decided to stick with the two primary characters you start with in most of the NES games. I think they came out pretty well; tried to make Rush fairly cute-looking instead of like an annoying Scooby knock-of. The Robot Masters I tried to put a fair amount of detail into each one, although some of them I put a slight bit more effort into based on if they were a personal fav.

This totally should've been in that book. Great job!

Boy, I sure feel bad about not knowing all these characters. Well, it's pretty easy to guess what their names are. I mean, you just consider their character themes! It's great that you paid tribute to all these guys. You definitely made them all unique. This is one of the best Mega Man drawings I've ever seen!

You truly capture the power of all these bosses. It's funny, because I remember a lot of these guys from Newgrounds parodies. Mega Man's pretty popular here. It's amazing how much I've learned about video games here. They'll just never run out of these guys. I can see why this is one of your highest rated drawings!