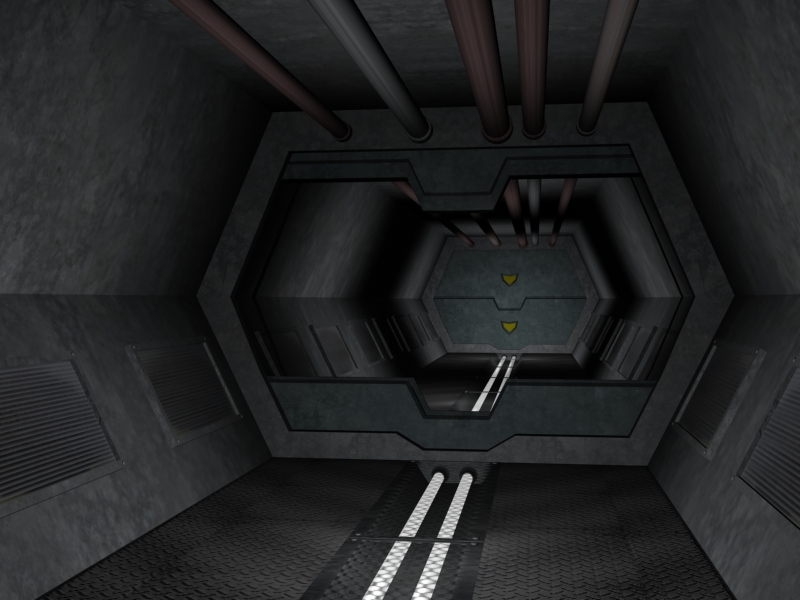 well this is something I had to do today for an art test. I felt it came out rather well so I figured I'd post it.
it's pretty basic, but I feel the design works well.

Questions, comments, critique?
you know what to do.

Certainly something that makes for a well designed piece of space station, but I would ask one simple question here - why does the bulkhead stop at about mid-shin? Basically, for reference, I'd point you towards Start Trek and Star Wars, as they have thick frames around three sides. Your design is impractical, especially if large, heavy equipment was being wheeled through the station / ship, it would not get very far, before meeting an obstruction.

Good work with the colouring and an interesting position for the lighting, being based below the eye-line, which might dazzle people wandering through.

While you may have a taste for the impractical, it certainly looks good and realistic for a scenario like this. Have you ever played games like Warhammer 40k, or Space Hulk, as these could give you inspiration for further pieces of a similar ilk. Perhaps adding life forms would be the next logical step for you.

As for the door I wanted to either go for a feel of the door not completely open, or broken. Since this was suppose to be built as if I was building it for a first person shooter I wanted to play around with the atmosphere a little and get that creepy feeling in there.
I'll have to do some more thinking ahead on the design though to fix the design issues with moving equipment threw the passage ways though.
Thanks man.

This is a really nice picture, which looks like it came straight out of a movie like Star Wars. I only have a few problems with it, but it's still really impressive.

The colours chosen are mostly on the dark side, and while it looks cool like that, you could add some lights and stuff at the side/ceiling, mostly red or dark-ish blue lights. The shading was just excellent, and it's what gives this picture such an awesome 3D effect. The textures you did were detailed and fantastic too.

The concept is unoriginal, you have to admit :P. This type of corridor appears in loads of futuristic games and movies, plus the shafts at the side really remind me of the Death Star in Star Wars, where if you fall through it you end up with walls crushing you from the side. Perspective was perfect, by the way.

What I think is pretty weird is the open door. Was that door intended to be fully open or still opening? If that's as far open as it goes, that is quite strange, because if you're walking through that corridor you'll have to step over the bottom part of the door to pass. Maybe it'd be better if you open the doors sideways instead of vertically; I think it looks better and people won't have to worry about tripping ^^.

Overall, it's an awesome picture, with a very well done 3D effect. Just work on adding a bit more detail and fixing that door, but good job in general :).
9/10
5/5

Well yes, I do like making futuristic stuff, but to be honest it's about the steel and machines.
My father was a truck driver and a mechanic in his free time, so that really molded my child hood in to more of a gear head type of artist. Even today if I catch the glimpse of a old rat rod, or a 67 stang roar by I turn my head and drool a little. Honestly some times I think I look at machines like a sex starved convict eyeballing the new busty female warden.
Yes, I need help, but by god I'm not going out of my depraved way to get some :P

Thanks for the kudos on the textures. As for the lighting I really wanted it to come from the floor. Lighting like this tends to look creepy and creepy was what I was going for. As for this being a generic hall, I agree, but in my defense, it was what I was told to model. and gotta listen to the possibly future boss, am I right? lol
as for a technical aspect I probably should make the door more retractable, for the one that is open, I wanted it to look like it was either opening or stuck, depending on the situation. perhaps some sparks and loose wires would help convey that effect.
Thanks for the review.

Yeah, it's pretty basic, but it still looks nice. I like the lightening in this picture. I think the shadows give this picture a kind of creepy look. At least I could imagine nicer places than this corridor.

Also the perspective works very well, it really looks as if I was standing there looking down the corridor.

But I think a few more details would have been nice, maybe another door in one of the side walls, or a person walking down (or up) the corridor.

When I was building this I had a very short amount of time to complete it in, so although I thought of doing a more intricate hall way with more doors off to the side, time would not allow. It has crossed my mind to go back and over hall it, but I think the simplicity helps this piece.
I really wanted a creepy feel for this, I wanted people to think "you know, I think I'll go around" and although I was off from being that creepy, I still like to think I at least made them think of it for just a second.

As for walking threw I had a friend of mine tell me that I should play with my camera as it moves threw the hall way in the animation.... I just might do that.

Excellent stuff, just remember Fake where your light source is coming from. Make lights, lamps, LED dials, then light your scene dependant on these sources.

Superbly done! (I was so sure I had you on favs, cant believe I never! WTF Was I thinking? So sorry bud!)

sweet I made it to some one's faves list >:)

I tried to get the "tube lights" under the grate to work out better, but I still seem to be just slightly off.
When I'll be working on a control panel later tonight, so I'll be sure to try and get things right.

The design is nice...

I think it's well done, and detailed.
It reminds me of the corridors in the alien movies, specifically "alien resurrection",
So that's pretty cool.

Be that as it may, I do have an issue with the piece.

I always feel your work is really nice, and well done, although somehow incomplete.
You yourself acknowledge this by saying it's basic...

These are things you should work on, since they prevent your work from being truly great.

These pieces feel unfinished, and an artist of your calibre, should show off your full potential.

it's the 'basic' package, maybe I should up grade to premium :P
yeah I went there.
I talked to a few friends of mind and a couple of pros about this and they kind pointed out what I need to do to add the bang to the buck.
they said I should go ahead and place some identifying marks on the walls, such as the corridor number or the ship name. They also said that they wanted to see a control box, so hopefully later today I'll have time to do that.

Thanks for the Review!