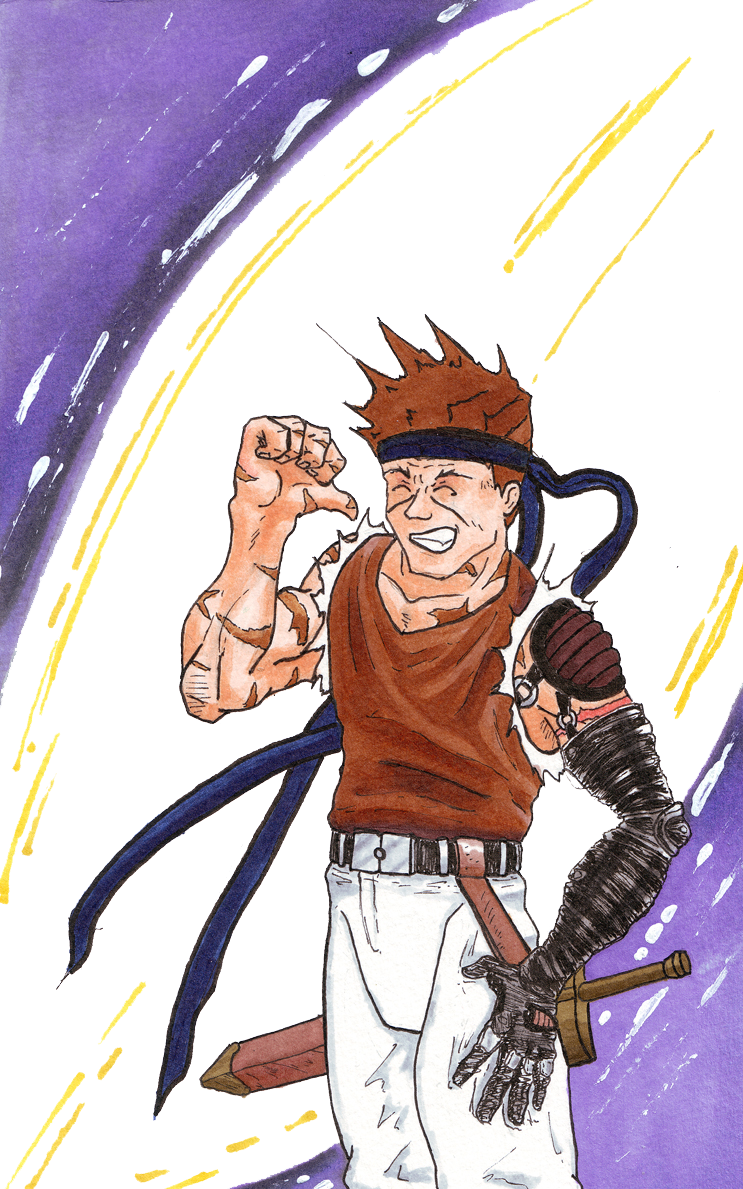 I really could no longer wait, I had to get this out there. This was the Piece that I did for the '09 Sketch Book Tour.
Although there is an alteration from the piece in the tour and this one.

I'm thinking about playing with the color saturation though...

I could really use some feed back guys. so fire away

Here be some things i found about this one, both good and bad and maybe a little off:

3)(Alright) The background looks okay from here, but you should make sure to tell everyone to look at it in full size since the black in the background isn't really black it's clear, as you probably know?

4)(Good) The details overall is very well done. Though the hair is a bit off and is your typical spiky hair thing, but it works alright.

5(Good) There is definitely not a lack of color in this pick, with a lot of colors that aren't to bright or piercing in it.

I guess I really should have just put the original white up with that background. the transparency really isn't helping is it.

thanks for the tips.
sweet review

Well, that's a pretty damned good piece of had drawn art I just saw there! Though I'm not quite sure what the background is, you've certainly gone to town on the production of the character. The detail is exquisite - from the strapping on the arm, to the occasional blemish on the leather strap for the sword and the creases in the clothing.

You've found a nice tone for the flesh and I think this is the crowning glory of the piece, as so many aspiring artists fail to get a decent tone for standard skin - it's either too pink, or too pale, but you've got the balance there, with a little orange added in places, which could easily be passed off as arm hair, judging by his hair colour in the piece :P

I think that there could have been more detail in the right shoulder, as it doesn't quite look buff enough for the rest of the body. I know that it's hiding behind the torn sleeves on the vest, but it might make more impact if there were a little more muscle tone detail there. The same can be said for that right arm - muscles that big tend to have bulging veins along them, so one or two, just for an additional insight would work tremendously.

Finally, I'd suggest something with the hair - it doesn't look realistic enough for me - you've coloured it as if it was one swathe of colour, in the same way (and colour!) as his shirt. Directional colouring can create the effect that the hair is actually composed from your pencil strokes, giving the impression of more hairs than are actually outlined.

Good luck with the sketchbook tour!

yeah, hair has always been an issue for me. Guess I should practice more then, huh...
As for the BG I was really out of ideas and didn't want to pull away from the original piece, so I just did something abstract.
Thanks for the Review, it's really helpful.

I don't know why, but this picture somehow reminds me of Johnny Bravo, heh. Maybe it's the pose. Looks as if Johnny again tries to impress a woman. XD

Anyway, the character looks very good. A lot of details can be seen here, for example the mechanical arm or some folds on his shirt. All those little details add a lot of quality to the work because it shows that you put effort into the drawing.

However, the background isn't too good and should be changed in my opinion. Right now there are just some funny colours and a large part is even just transparent. While this still looks better than a plain white background it isn't really satisfying too look at.

As for the background, I really couldn't think of one when I was drawing this. so I really just kind of slapped the background together. Perhaps with the white, it will be better.

Solid piece with one serious flaw.

I like your drawing I think the proportions, and autonomy are right on.
The pose itself feels kind of generic, however that aside it was executed well.

The detail on the character is well done specifically the mechanical arm,
and the coloring is pretty good.

I like the fact you have a background, although I feel it doesn't add much context to the picture, aside from a nice backdrop.

My major issue with you work is your characters facial expression,
it reminds me of the video game character Max Paynes "constipated" angry face.
It doesn't look natural, what is supposed to be a smile looks more like a clenching of teeth, as if he's attempting to pass a gory, painful, & massive shit...

Other than that it's pretty good, although the pants seem somewhat unnatural.

Thank you very much for the review , I greatly needed it. and the "Constipated Angry Face" was just pure awesome, thanks.
I like showing people my work and getting there first reaction, it has caused me to change the name of many pieces, usually for the better.

I never really thought of this work with suc an expression, I really thank you for bringing it ti my attention I will definitely keep in in mind for the future. although I many have a new comedic gag now thanks to you :P.

I like it, it looks a shitload better than mine. I really want to see what mine looks like again, I forgot to scan it for myself before i sent it out.

Background is a bit confuzing though, Its just like LOLWUT? behind him. The hands lokok really good, and everything looks like it should be where its supposed to

actually I was goofing around and deleted out part of the background for kicks.
If people don't like it though I have no problem with switching it out for the original white background.