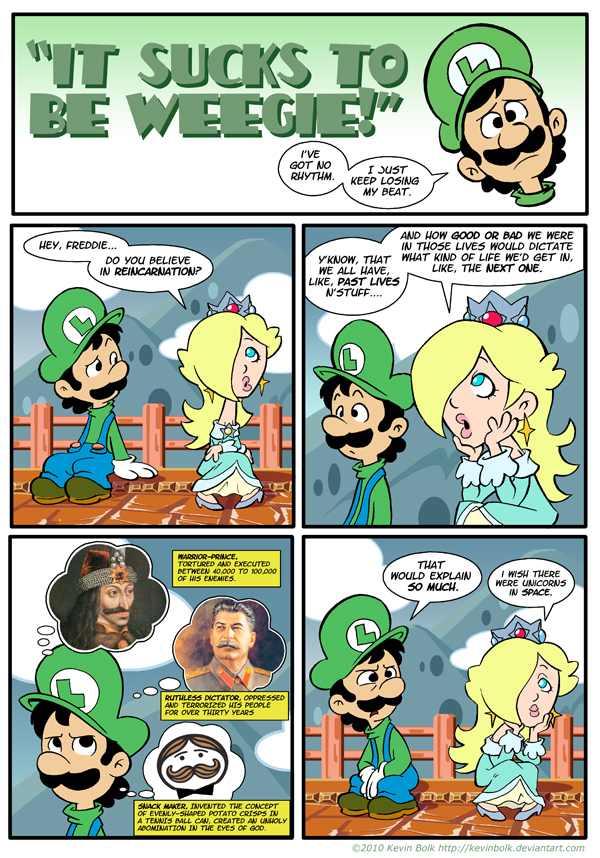 Sucks to be Luigi: Past Lives

And now, another chapter of "It Sucks to Be Weegie". Laugh and cry with Mario's little brother Luigi as he struggles with handicap of...well...being Luigi.

Sometimes I think Luigi has a very distorted perspective on how bad his current life ACTUALLY is. And also, big mustaches don't ALWAYS equal evil.

Hope this one isn't too high concept (re: confusing as heck). 9_9

y does she have a big neck?

I belive in reincarnation :)

Yes, I do believe in reincarnation and I'd have to say Luigi thinking of himself as ruthless dictators, kings, and hard to reach when there's still some chips in it so the only choice is to eat it the way people drink cans with a funny looking guy as a mascot is some funny thing. From great to great to tasty but devilish to downright loser. hahahaha!!! I really like your comedy and especially when these type of conversations start you'd remember Calvin talking to Hobbes then ending the discussion with something irrelevant(like when she suddenly said something about unicorns). Also its kinda cool the way you made all of them look like a child's tv show with so many topics a mere child won't understand(but if that child does understand, WOW what a genius). Also,that's a lot of eye-liner. Her shoulders look wrong in the first panel too. Other then that, I'd say you're on the right track with this comic. Can't wait for the latest luigi comic strip. :).

P.S. Keep this up and you could print a book like what the guys who made Cyanide and Happiness did. Good luck with that.

A really nice track of thoughts you followed there. Characters as well as background look great and the viewer can really feel Luigis misery. It really gives you a glimpse at the hell that is his life.

And since I'm already typing: We are talking about Characters from a game where the size of peoples heads almost matches with the rest of their bodies... I can't understand why somebody could be so nit-picky.
To me her slopy shoulders, extra eyeliner and haircut were all pointing in the direction of the emo-scene, which only makes sense.

In my own words i must sat keep up the good work!