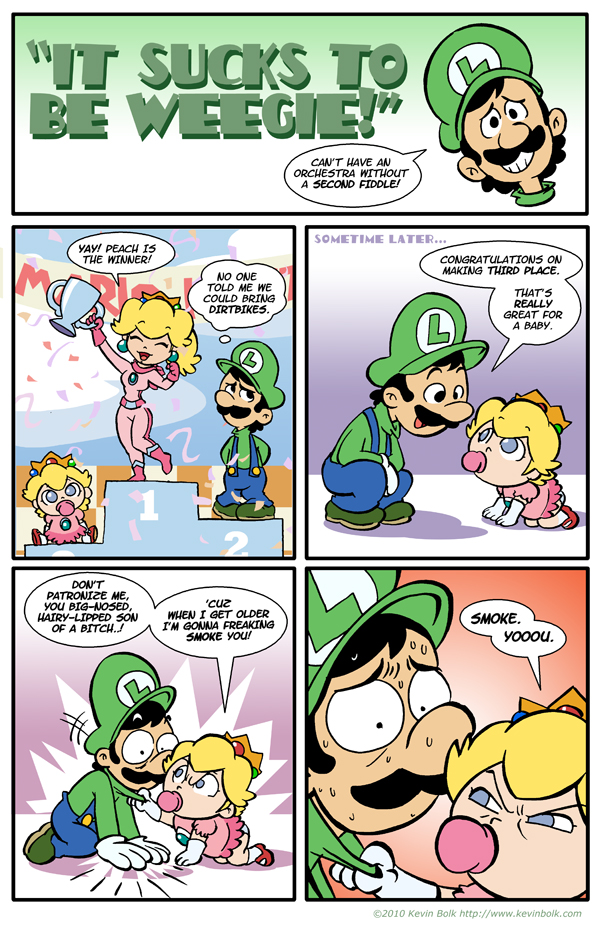 Sucks to be Luigi: Mario Kart

And now, another chapter of "It Sucks to Be Weegie". Laugh and cry with Mario's little brother Luigi as he struggles with handicap of...well...being Luigi.

LOL, I'm not sure what to make of this comic when I read it, but this was one of my favorite parts. XD

It's funny how Baby Peach doesn't seem to realize that her older self literally did just beat him right now. :p

Both Peach and Baby Peach winning the medals next to Luigi... Peach is a cheater. :p

I always thought Luigi was awesome for some reason, I don't know why. XD I guess he always just seemed like that second best person next to Mario who seems to ironically not get enough love simply because he's not #1, even though he's the next best thing to that. :( And yet, because he's skinnier than Mario, he can jump even better than Mario, and other possible things. XD

Plus he's like Courage the Cowardly Dog in Luigi's Mansion, scared to fight ghosts but doing it anyway all to save his brother Mario. :p The ending was so incredibly heartwarming and funny. ^^;

Finally, his Mr. L persona in Super Paper Mario and his crazy adventures in the game before that, Paper Mario: The Thousand Year Door, where he goes to the Waffle Kindgom or whatever. :p And creepy Weegee. XD

Seriously, how can you not like the Weegie? :p

I love the ''It sucks to be weegee'' comics.
They're funny and well arted (cuz arted is a word).
Weegee is my favorite but it always sucks to be Player 2 anywhere.
Anyways I love this,
Sincerely
Chef Boyardee

Being threatened by a baby? HILARIOUS!