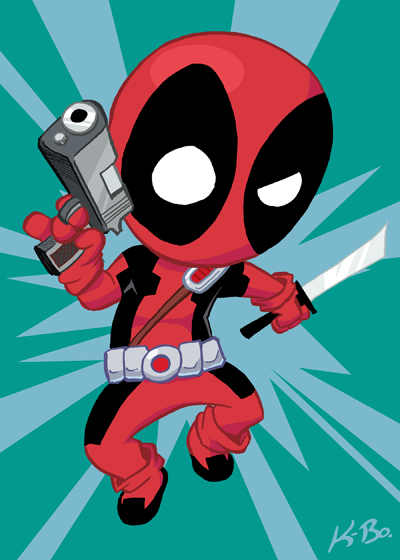 ~~SUGGESTED IDEAS~~
Some added shine on the gun

Reminds me of the Game Grumps for some reason :P Looks pretty good btw!

Well drawn, well colored, and Deadpool has one eyebrow cocked as always. Even has the old four fingers that cartoons are used to. Did anyone else think this big head version od Deadpool has a resemblance to Strongbad?

As usual, you know how to capture the essence of a character's cuteness. The best part is how he is just standing there looking so silly. Probably the only thing I did not like was how it didn't seem as well detailed as some of your other works. I guess it's because he lacks a mouth, but he does that automatically anyway. It's pretty cute to envision him with the little gun and sword. Well, at that size it's not even a sword, probably a knife.

I like how he seems to have these little boots on. I'm not that familiar with the comic book design, but that's probably from the comics. I would think most cards would have the character's name printed on it. I just now noticed your signature in the bottom right hand corner. It makes sense such an awesome guy would be one of your favorite characters.