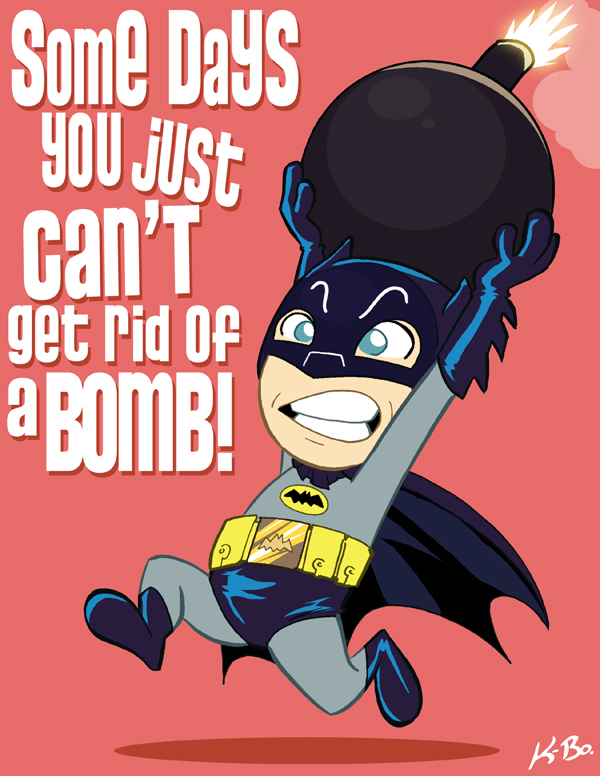 Some days you just can't get rid of a bomb!

I love your stuff man!

That was probably the most reticulated scene in that movie... wait a minuet, the shark repellent scene was worse :D

You probably make the most adorable pictures of anyone I have seen here and even on the entire Internet. It is always cool to see people working on a meme. In fact, for a picture like this, that is all you need. I love how you did not try to be really elaborate, but you just went for a humorous depiction of a wonderful meme. Batman probably doesn't look as cute as most of the other characters depicted in your works. Of course, you can't go wrong with the Adam West look.

I notice how he has white eyelashes. It's kind of weird looking, especially when the rest of his costume appears to be so much darker. Well, the Adam West series was known for embracing silliness and you have done the same thing with this art piece. There's a nice amount of detail put in him and everything. Not that much going on, but still great.

A short simple frame that makes us laugh. Well done.

I like how you have captured the eyebrows from the TV Costume. I always lol'd at those, so seeing them here brought some nostalgia with the piece.

I totally dig your style and absolutely love this movie. (Own it on VHS and DVD) I love how you captured his determination to get rid of that over sized bomb. So many shenanigans on that pier.