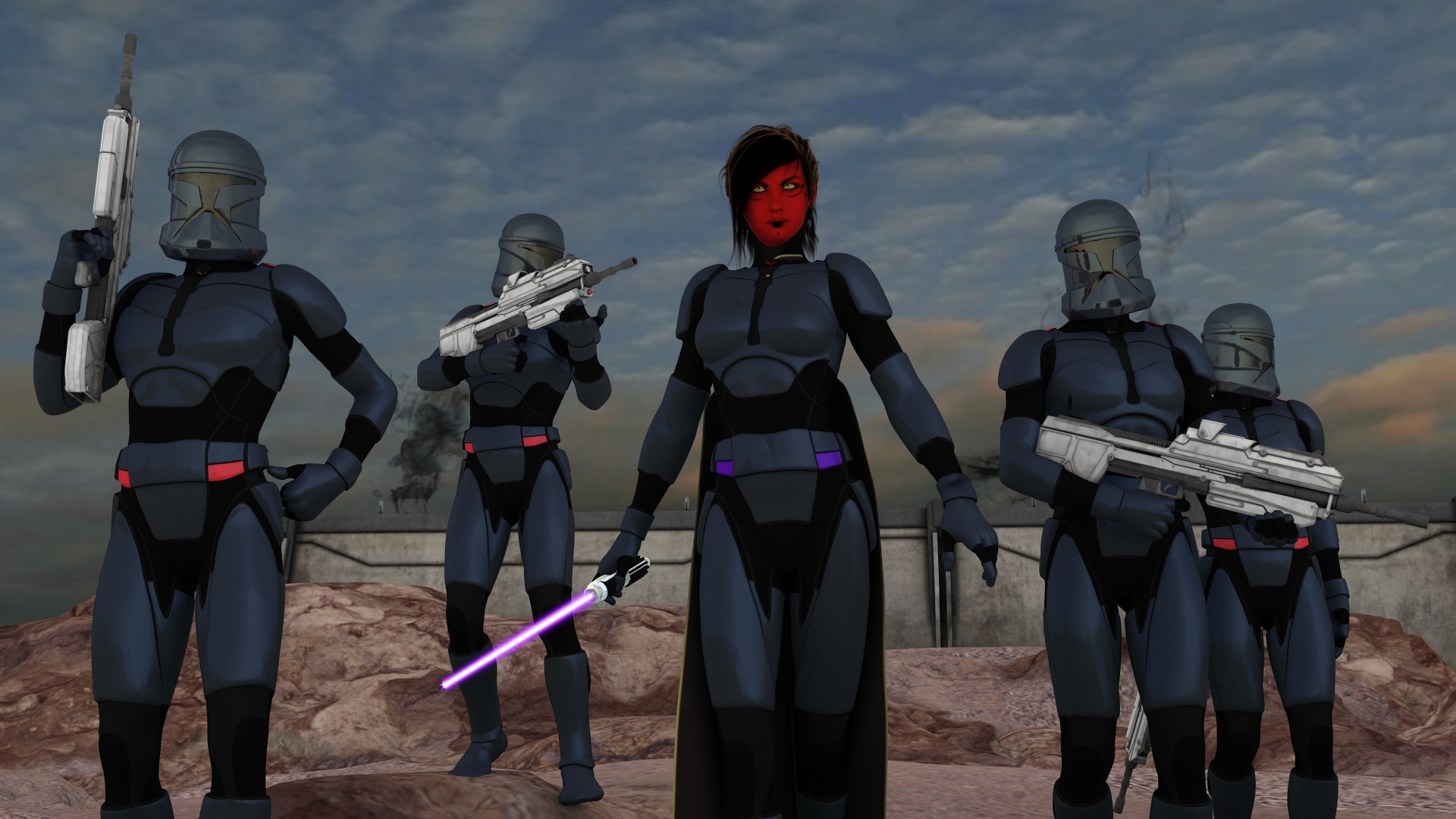 Rolling in teh Deep

Teh Imperial Legion courteously welcomes you to Balmorra....

Yes man! You have to do what your equipment can make look good. Don't try to make a Pixar film if you don't have a server farm. It's fine if it looks like video game graphics. Really, it's about showing what you have in the best possible light with what you have. Not all computer graphics need or should look photoreal.

They would not have been able to pump out the Starwars toon as fast if they have gone that route. If they have gone in that direction it would have be cheaper to and faster to make it a live action show.

FUCK PHOTOREAL, all of us can make a photorealistic render. Think about it all of us are using the same crap that the studios use.

That stuff has no heart. I say make up your own style that lends itself to the tools at hand. While you are at it, just make up an entire new world not based on an existing property. That will force you to concentrate on your story. You'll have to introduce us to your characters on my your terms not someone else's.

I'm influenced by a lot of crap but no one looks at my crap and says, Oh that's Gundam, Star Trek, Star Wars, 2001: A space odessey, Alien,Silent running, Macross, Ghost in the Shell.

You did this and I know you can do that. Don't take the easy way out Kel-Chan. I believe in you :)

I dont even know how I got on the star wars tangent. I think originally since I'm new to all this 3d jazz I want to see what I can do with it. Also it helps to bring in some viewers and originally I was just going to make a short Star Wars Parody but then I got into it and came up with an actual story and neat characters so I guess in the end it would be just another Fan-fiction type thing.

I have plenty of original stories though but I want to save them until I have an actual audience and I'm better with these programs and get the workflow down.

I also wanted something more realistic just to get away from the anime for a bit and branch out into other styles.

For this project, I think I can still create a world within the Star Wars universe just for NGers and fans, but it'll end up being more than a parody. Kind of like how bioware made their Knights of the Old Republic series first before making their own Mass Effect series.

smoke effects in dax? it's got it all!

Love the concept and layout.

The storm trooper girl second from the left is having trouble with her gun though, it's floating about her hands. Another thing about the guns, is that they seem out of place texture wise, I'm not sure if it's not matching the worn look of the armor or simply the tone and lighting but either way it seems like they don't belong.

theyre kind of shiny white while everything else is dark colored. I changed the diffuse color to darker but it made them look plastiky and toy like. I think I have to mess with the specular UV map and lighting or just edit the texture

Is this a parody? I never watched the cartoon series

It looks just as good as the 3d art inside the cartoon . Very nice maybe they can give you a job in a new movie XD

I dunno if I'm gonna make a parody or not- I started making it a parody but as I wrote further, it turned into more of a regular story.