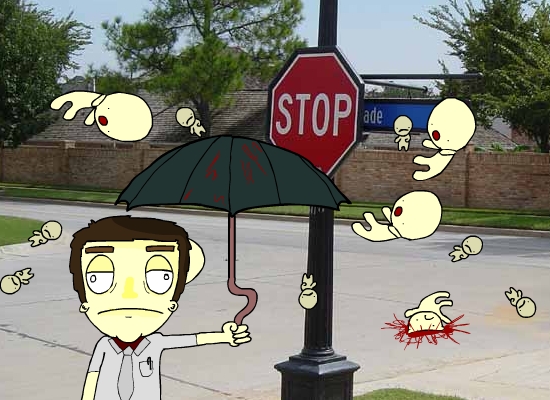 Nice work on a crazy concept.

This was differant, almost looks like there is a photo in the backround, as for the rest of the art stuff, its a good idea, the umbrella looks good but could use some better shading, and the character himself could use some more detail and shading aswell, for the mostpart its pretty good, the falling babies was ok, kinnd of entertaining in a bazaar way, i think you need more blood splatter, but anyways its a good art piece, but does need more detail and shading parts, especially with the character and props.

~~THINGS TO IMPROVE ON~~
So while this was a pretty good and amusing art piece, it could use more effort like with some graphics detail, and some improved shading on the character and even umbrella.

That is very sad and that is sinfull that man should save the babies not standing like a hippo.what a ass.

The meanest picture involving babies ever.