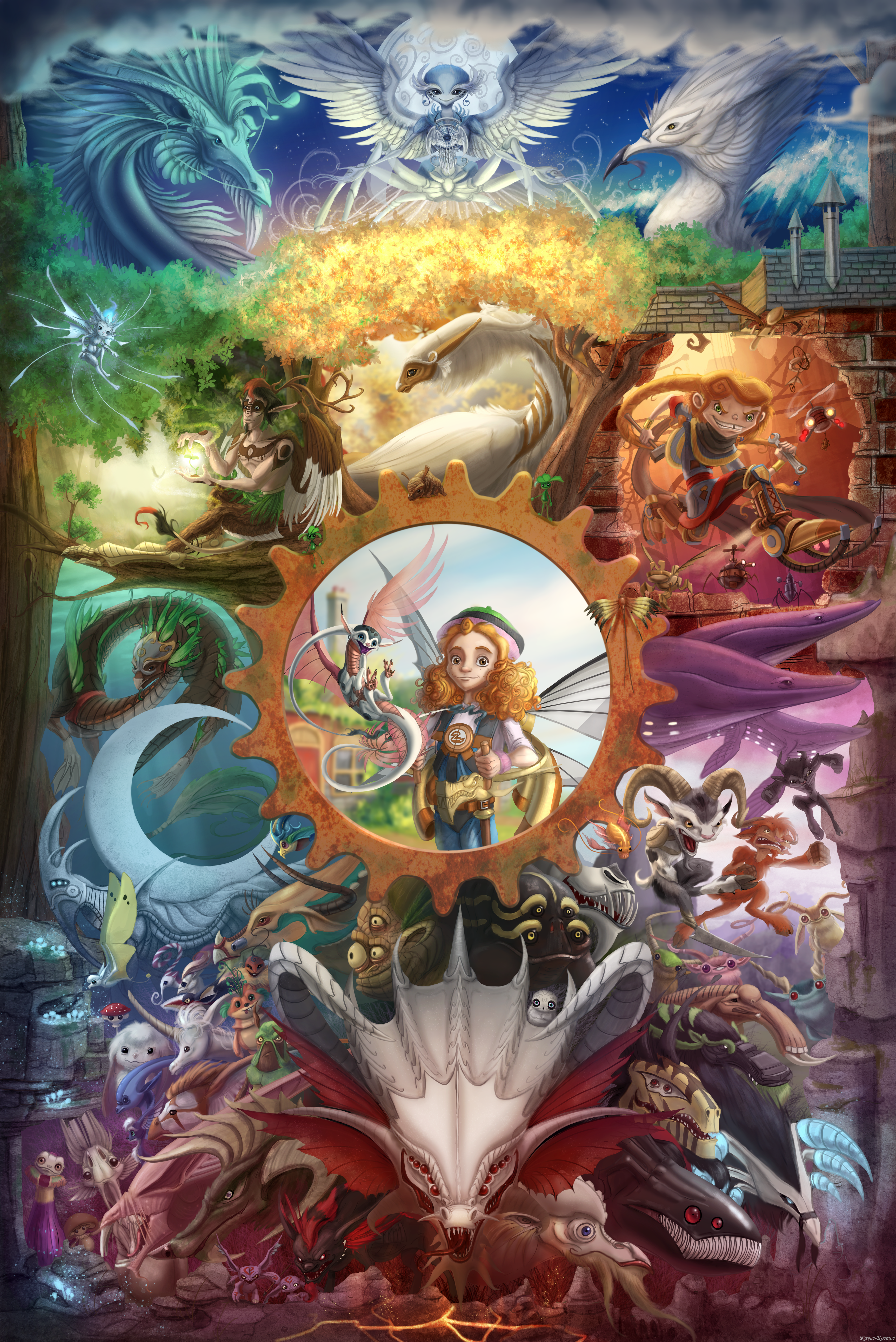 WARNING: GIANT DESCRIPTION UP AHEAD!

Okay so now for an explanation to all of this insanity. To anyone familiar with my work, you may recognise some of these characters from my upcoming comic series, "The Increasingly Absurd Endeavours of Gretchen Goosander." Each character and setting portrayed here is from that series and each has their own fleshed-out backstory. This massive drawing is something I have been planning for months but I decided to complete it now since the "Draw with Jazza - My Oasis" competition commenced and gave me the perfect opportunity to complete this.

So why am I entering the crazy world of Gretchen Goosander as my Oasis? Because... it kind of already IS my oasis. This is a world that has been in development since 2013 when Gretchen made her debut in a crappy YouTube animation. Whenever I tried to think of an idea for my Oasis, this is the world that kept popping into my head, so I went with it.

The world has become a really interesting and engrossing place since then, filled with bizarre creatures and characters, mad science and mad magic. When I need an escape from the stress of everyday life, I can just pull out my sketchbook and start drawing characters for this series while thinking of new story ideas and scenarios.

In the centre of the image is Gretchen Goosander herself and faithful companion, Cwenhild the highland hopping dragon. This would be my "avatar" what with many people remarking that Gretchen looks and acts very similar to myself, (this wasn't intentional) and the fact that she is the designated audience proxy for the story. She is wearing her ornithopter pack, the Spruce Goosander 2, which allows her to navigate the tricky landscape of Upshire. You can also see her dragon head-shaped war-hammer hanging off her belt.

In the top row, there are three legendary beings, the auroraphrax, the angel spider and the sea fury. Below that are Candlit the bluecap, Poig the forest spirit, Mumbeltrousse the honey dragon and Rooey the 9-year-old double-amputee Australian mad scientist with robotic kangaroo boots for legs. To the left of the framing cog are the Loch Ness Gatekeeper and the moonstalker and to the right are several skywhales.

OH GOOD GOD THE BOTTOM SECTION! There's too many creatures here to namedrop so I'll just pick out the important ones. Firstly you'll see beneath the skywhales is Billeh the armless one-legged stig who is capable of taking down beasts many times his size. And that terrifying ten-eyed monstrosity in the bottom-middle is the blood dragon, the big baddie of the story, surrounded by some other notable villains such as Valupean the venomous vinker. But don't assume all the hideous monsters of Gretchen's world are evil, as many of them are merely misunderstood and even come to befriend the protagonist.

I feel that planet Urf is a perfect Oasis due to how it isn't perfect. It's hell and heaven all rolled into one. It's beautiful and terrifying at the same time. However, the charming and weird characters as well as the rustic, old-fashioned charm of the world make it a place worth visiting. There's a lot to do here, from riverdancing with stigs to teaching skywhales light-flash Morse code to soaring over Upshire on the back of a huge, fluffy dragon. And would you believe that this is barely even a fraction of the characters and creatures that appear in the story? Seriously, I could not squeeze them all on so I had to be very selective.

Anyway I hope you like this! This drawing nearly drove me totally nucking futs completing it, but it was worth it to try and show you this new, weird world of adventure.

I really enjoy that you have found your “style” as well as a character story line! While I really love the piece as a whole, I wish it showed an actual WORLD in which these people and creatures live in!! That would be something amazing to see:) Great stuff, keep going

Really impressive, the sheer number of characters is incredible. At least the runner-up if you'd ask me

Wow this looks so clean it's insane! i like it! :)