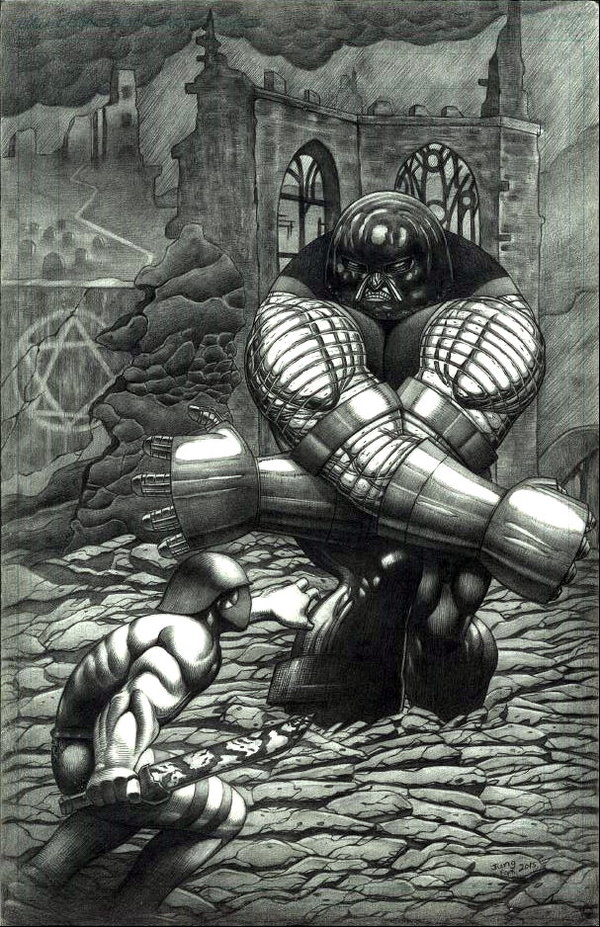 Beautiful piece! The contrast and highlights are phenomenal and I absolutely love the shine on the metals!

OH THANK U FOR THE LOVE. HOW COME U DONT PUT UR PHO OF URSELF IN THE PROFILE PIC?

wow, this was an IMPRESSIVE futuristic version of the battle between david and goliath.
i like the modern-day/futuristic design of the city, along with the old cathedral, the town's wall and the star of david, while i also like how you drew the two fighters.

goliath looks like a futuristic version of juggernaut(from x-men), and his angry face/iron moustache/ and his metallic muscles/metallic hands complete his fearsome, towering look.
he is certainly looking impressive, anatomically correct, and nicely drawn.

the same can be said about david.
despite being smaller in size, i like his muscular build, his iron helmet+his impressive mask, while his greaves and his (bloodied) sword are elements of his magnificence.

everything is great in this drawing, both the human figures, the anatomy, their muscular build, the poses, the shading/lighting, and the backgrounds.

you did a great work, keep it up, and do more!

WOW. THANK YOU. YOU MADE MY DAY FOR SAYING ALL THAT YOU SAID ABOUT THIS ARTWORK OF MINE. WELL THAT GOLIATH GUY IS ACTUALLY A CHARACTER THAT MARVEL COMICS HAD A RUN WHERE COLOSSUS AND JUGGERNAUT WAS COMBINED. I DUNNO THE STORY . I NEVER READ THOSE ISSUES OF COMICBOOK, BUT I WOULD TO READ AND FIND OUT HOW THIS CHARACTER CAME ABOUT AND THE STORY. LOL U SAID IRON MOUSTACHE? I DID NOT DRAW MOUSTACHE ON THE BIG GUY? WHERE DO YOU SEE THAT?

WOW IT IS HARD TO GET THIS KINDA DETAILED COMPLIMENT FROM SOMEONE. MAY I ASK YOU WHO RU??

So... Juggernaut + Colossus = Goliath? Pretty cool design, though I'm a little confused by the pose. Was Goliath already cut and he's defending himself with his colossal (pun intended) arms? Hmm. There's a lot of blood streaked across the length of that sword, must have been a deep thrust.

Excellent use of light and shadow with varied stroke techniques. What medium did you use for this? It looks like graphite. Mechanical pencil, perhaps? Nice hatching and cross-hatching, and the two main characters are very well-defined. The rock textures generally lack that rough, gritty feel. I dig the Seal of Solomon on the wall, though the proportions are a bit off...even accounting for perspective.

Pretty cool imagery overall, and it was very eye-catching on the Front Page. Congratulations on that honour, incidentally! You have an interesting repertoire, and it seems that you tend to favour character drawing with a penchant for (super)heroes and villains. Guess I can't really fault you for a bit less detail in your background elements too much. Keep up the good work!

THAT GOLIATH CHRACTER IS MARVEL COMIC CHARACTER YE SIT IS COLOSSUS/ JUGGERNAUT. MARVEL HAD THAT CHARACTER RUN IN THE BOOK. NEVER READ SO I DUNNO WHAT IT IS ABOUT. IT IS DONE WITH LEAD PENCIL. THIS PIECE IS DONE TO SEND TO GLASSHOUSEGRAPHICS COMPANY HOPE TO DO REALLY COMIC BOOK COVERS AND DO SOME TRADING CARDS/ CONCEPT ART AND SO ON . NOT REALLY INTO SUPERHEROES BUT I HAD TO DO IT FOR THE PORTFOLIO TO SEND TO THAT COMPANY. I DID NOT STRESS TOO MUCH IN THE BACKGROUND SO U PROBABLY MIGHT SEE LESS DETAIL SOME DRAWING NOT RIGHT (I SEE THAT NOW I LOOK AT IT LOL) FOCUSED MORE STRESS ON CHRACTERS AND THE GROUND. THAT SEAL OF SOLOMON YES I CAN DRAW THAT MORE BETTER ,BUT THE TIME WHEN I DI DTHIS PIECE I DID NOT PUT TOO MUCH ATTENTION TO THAT. NOW I KNOW I SHOULD PUT LOTS OF ATTENTION TO THE WHOLE DRAWING . LOL I NEED DISCIPLINE.

THAT GOLIATH POSE . NO HIS NOT COVERING OR DEFENDING HIMSELF WITH HIS ARMS.I THOUGHT IT WILL COME ACROSS AS HIM COMING TOWARDS THE CHARACTER OR SOMETHING. ALSO THAT GUYS SWORD LOL THEREIS NO STORY IN THAT I JUST PUT BLOOD THERE BECAUSE JUST DRAWING SWORD LOOKED EMPTY TO ME. THX FOR THE IN DEPTH OF MY WORK. ALSO LOOKS LIKE U DO AUDIO WORK. U DO LIKE SPECIAL EFFECT SOUNDS OR SOMEHTING?