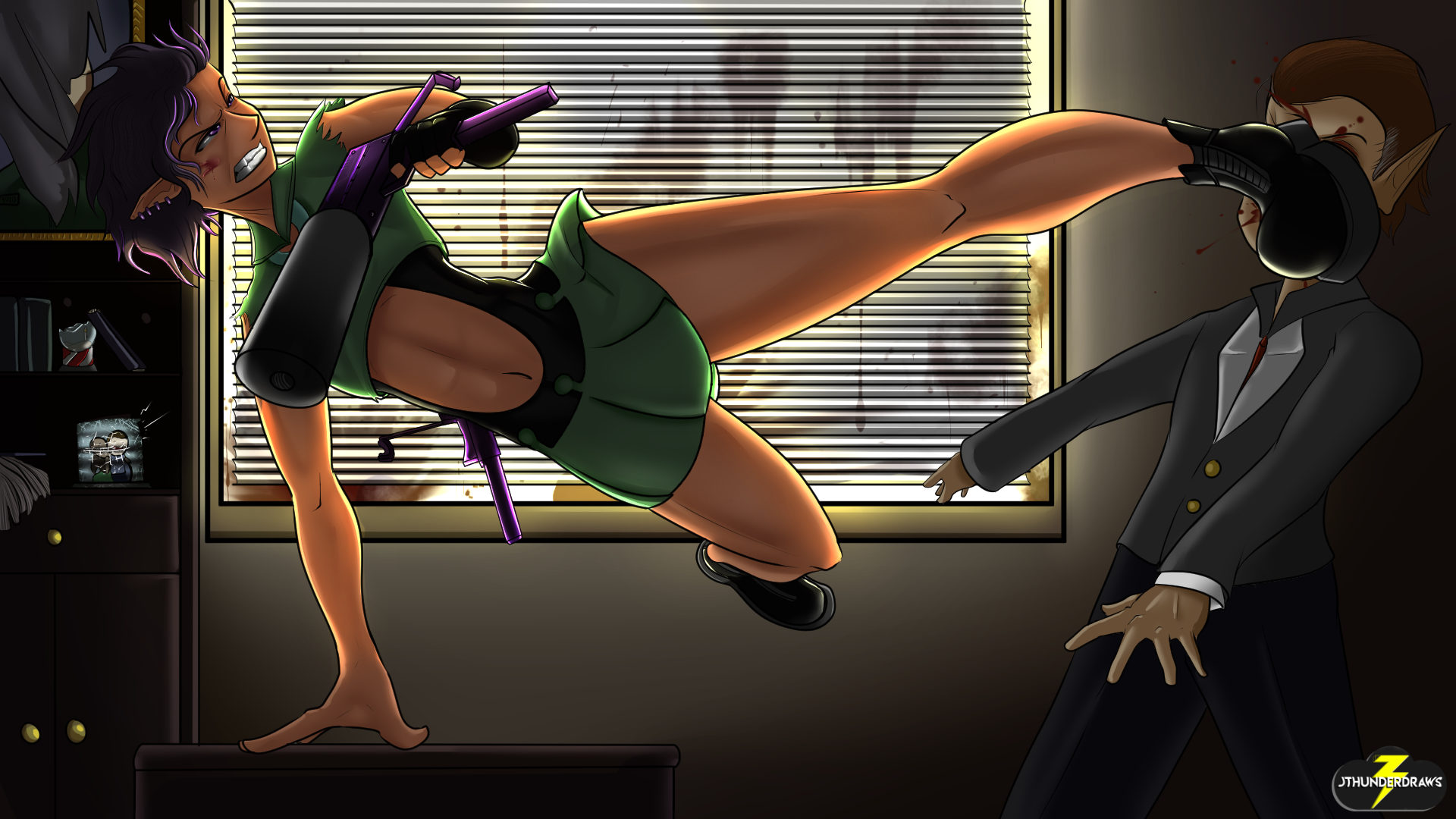 With the highway behind them, Deru and Meryl made their way up the long dusty road, on that hill, toward the prison. The stillness, despite a low wind from the south indicating a storm on the way, was almost too much to bear.

Anxiousness held them as they reached the peak of the hill, and began crawling up to the top. Grey, the prison loomed over them, taunting them with it's deathly gaze. Passing the binoculars to Meryl, she peered down at the gates. 6 armed guards, three just inside the chain gate, and three out, were there to greet them. "Holiday weekend my ass," said Meryl, muttering it under her breath. Well, their informant was half right about the number of armed guards.

One guard slumped forward, then the remaining two did the same. Deru looked West to spot the long barrel of Brandon's Lighting Rod, his very own custom sniper rifle, poke out of the trees. That Wyrm Water from FlowTek did the trick it seems. The remaining three, in an attempt to sound the alarm struggled, hands around their necks as they dreamt forever. Grok, appeared among the corpses and opened the front gate. Running to meet him, they ducked inside as the gate closed.

Looking down at his watch, Grok began to punch the numbers in for the main gate. "You guys have got a little over a minute and a half to get in there, and get those girls. Rotation has already happened, so they should still be in their cells." Deru looked to Meryl as she pulled her dual MAC-11's from behind her waist, loading each with her custom 35 round magazine. She tapped the side of her hip to reassure herself that her .357 hadn't moved a muscle, and slid her brass knuckles over her own hand. "So, yo-" A small explosion shook the prison walls."Alright that's your cue! GO GO GO!"

Bursting out of the front gate, Meryl and Deru B-Lined it to the main yard before the hallway flooded with more guards. Before they had a chance to react, the hallway turned into a red paste, as the MAC-11's unleashed hell, 70 rounds of lead littered the hallway. As Meryl began to reload, one straggler tried his very best to get the jump on her, aiming his rifle. Unlike him, Meryl had her own backup, and Deru drew her .357 faster, clipping his spleen. He cried out, and she rushed to hold him to the wall. "WHERE ARE THEY?" "what...wha-?" "THE GIRLS, WHERE ARE THEY?" Smirking slightly, coughing up blood a little he spoke, "'yer too late, half blood fucke-" Without hesitation or mercy, Meryl put one in his brain, and watched him slide to the ground. "We're gonna have to split up, we don't have much time before the system resets." Deru nodded, and headed toward the cell blocks. Meryl could only think of one man who would know their location: The Warden. A slimy pale Full Blood, a cretin and a creep, she dashed toward the second level, ending the lives of anyone who got in her way. As she approached the office, she could hear him scuttering around, trying to gather his things to leave. She burst in, and passed a few warning shots throughout his office.

Jumping inside, she hopped his desk and slammed her boot to his face, knocking a few teeth and putting him on the ground. "You know exactly why I'm here, so tell me now, and I'll make your death clean, and painless. WHERE ARE MY SISTERS?" Pulling himself up slightly, the Warden wiped blood from his mouth, and sighed. "So, you've returned have you? Well, you are too late." "WHERE ARE THEY? WHAT HAVE YOU DONE?" "Conditions in this prison, especially for little half blood sluts are...difficult. Cell block C, number 42. Oh and one other thing....They were much, much tighter than you-" Meryl squeezed the trigger, emptying a few rounds into his head, splattering blood and grey matter everywhere. She wiped a bit off her cheek. "Fucking pig." She glanced at her watch, "Fuck." And dashed away to Cell block C, number 42.

A massacre lay in front of her, prisoner and guard alike, blood marked the walls. Stepping quickly, Meryl found herself at the cell. "Celia, Cheryl, it's me, Mery-" She froze mid sentence at the sight in front of her. Laying to the sides, the two huddled in the corner. Smaller than normal Half Bloods, they were gaunt. Bone was beginning to show on their chests, naked to the gods, chests moving up and down very slowly. The older of the two, blonde hair falling to the ground, reached slowly toward her older sister, uncovering the wound just above her heart. "Meryl..." she said in near faint a whisper, her sister swiftly to her side. "no no no, don't speak shhhhh", her vision blurred, "shhh, shhh, no no no it's gonna be alright it's gonna..." "Celia is gone already, but her body is warm, it is cold here...so cold..." "please be quiet i can get gork here, he can heal you he can...." "There is not time, Meryl. " Drawing her sister closer, "I do not have much time but it is so painful, so very, very painful, please." She rested her hand on her sisters weapon. "don't make me suffer..."(edited)

The scream, now filled with rage, filled the prison.