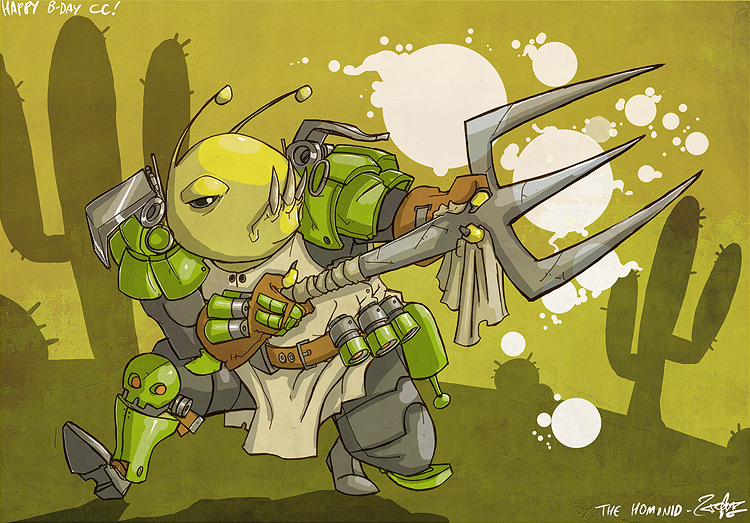 it's the grenade spauldered hominid! ready to x-ray rowdies and vaporise vagrants!

i gave the hominid his pitchfork as kind of an inside joke for all those hominid players that reached into that haystack early on and never looked back! i always loved the look of his magic. this is kind of an early birthday present for castle crashers, happy early birthday you super game! :D

Wow you do some amazing "WORK" and this is a different "TAKE" on the alien here you have some interesting pose too, the picth fork was a nice idea here I could see you adding a sparkle or more shine on the end of the pitch fork, you do some amazing work as you always have so keep up the great work.

It's so sweet how you give the hominid such an awesome design! I have no idea if that was supposed to be the character's name, but it works pretty well. Hey, this happens to be my 23rd birthday! It's nice to hear talk about birthdays on this day. It's actually the second time this happened, although I'm probably just more prone to noticing birthdays today. I love how strong he looks.

This refers not just to his strength, but also how good the character looks. I never would have guessed he would use a pitchfork as his main weapon. You'd think he'd be more into the blaster gun he uses in the game. Ah, I never played the game so I don't understand the joke! At least it's still my birthday.

Love this taker of A.H

i actually really like this version of the ol' alien as well.

thanks for the highscore and review pal!

You've taken an adorable character and made him into something both cute and terrifying. Nice job!

thats a pretty cool thing to have in an image. thanks for the sweet review pal!

hominid looks he got a green knight clothes....

so that gets a zero? sheesh you got some wierd logic friend. any ways thanks for stopping by.