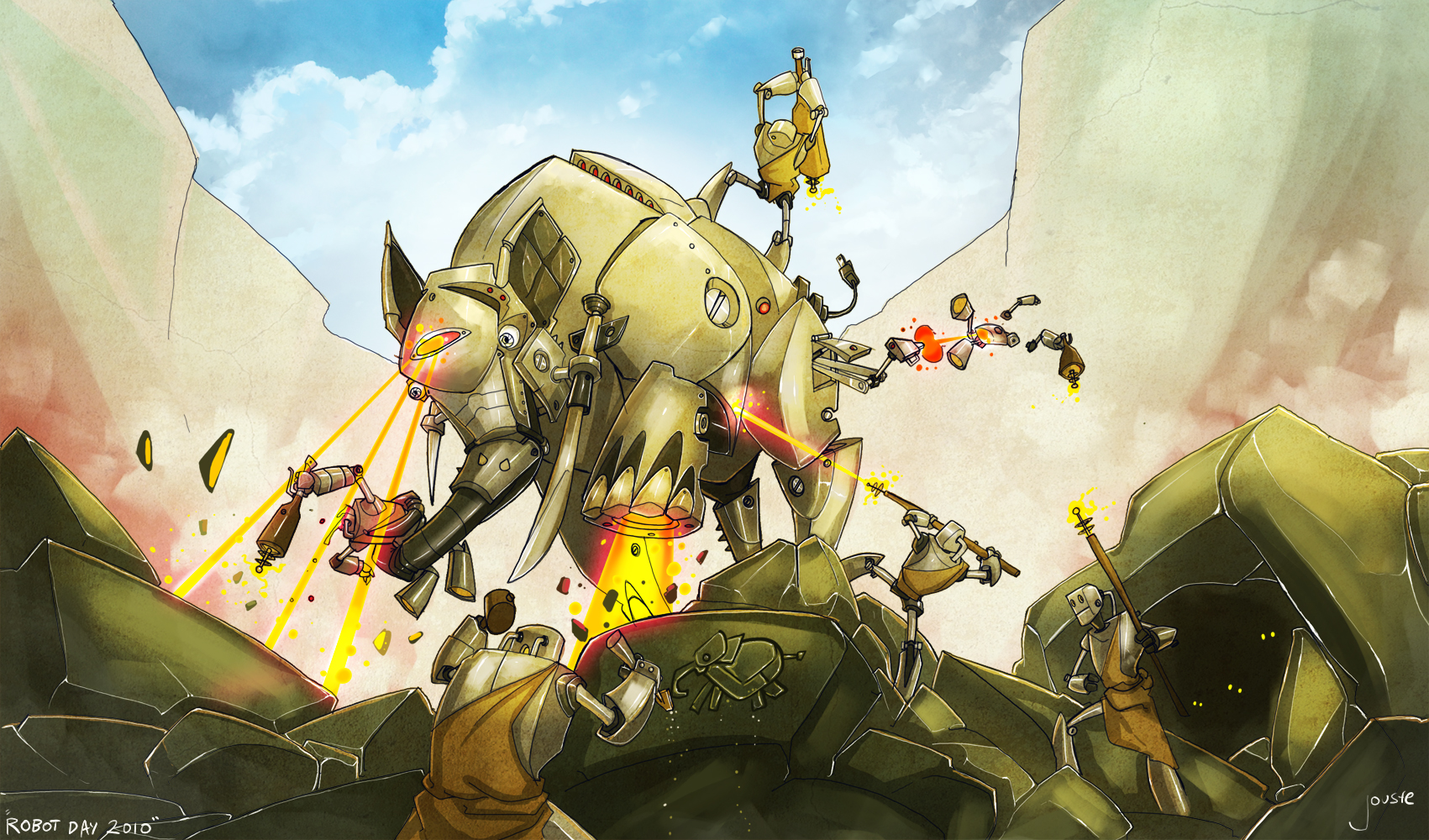 here's my entry for robot day! i know it isn't for a bit yet but i just couldn't wait to get some robot action drawn. so i present AMAZING TIMES IN ROBOT HISTORY!

so here we can see the hard up cave-bots battling the horrible mecha-mammoth. using plasma spears and laser clubs some cave-bots were lucky enough to bring down the beast and bring his spare parts back to the cave to build more cave bots and repair the elderly. in the foreground you can also see a scribe-bot carefully documenting the battle so that future cave-bot generations know how better to handle the dreaded mecha-mammoth.

such a blast to do and there's some really great entries so far! happy robot day everybody.

~~THINGS TO IMPROVE ON~~
Some added sparkle and shine as mentioned

This is an awesome picture if only because it combines two really cool elements, space travel and cavemen. It's so weird to have a mixture between two completely different genres. It kind of reminds me of the "Stone Trek" series. I find it funny how the mammoth is firing three laser blasts from a single hole in his skeleton or whatever. It's really fun to see all the little things that are going on in this picture. I love the little part near one of the legs that's randomly blasting a robot.

It kind of leads someone to wonder who build these guys or if one build another maybe? There seem to be several pairs of eyes in the cave that have yet to come out. It looks like reinforcements are on the way with those cool weapons. I could look at this all day and notice new things about it. Like I just noticed now there's a sword acting as one of the mammoth's tusks. A freaking awesome picture!

realling digging this one. Just... feels right! Keep up the good work, your stuff is very inspiring. GJ

keep on trucking when it comes too art! good luck!

i can't take it seriously. a dreaded mammoth with THOSE eyes? and it couldve been cooler if u added electricity to his tail. otherwise hella maddafunnin beasty

lol, thanks for the comment. i suppose his eyes aren't terrifying enough.

another great art im a fan of your stuff

sweet! glad to hear it pal!

i had a good time making this image so it's even better to know that you enjoyed it this much!