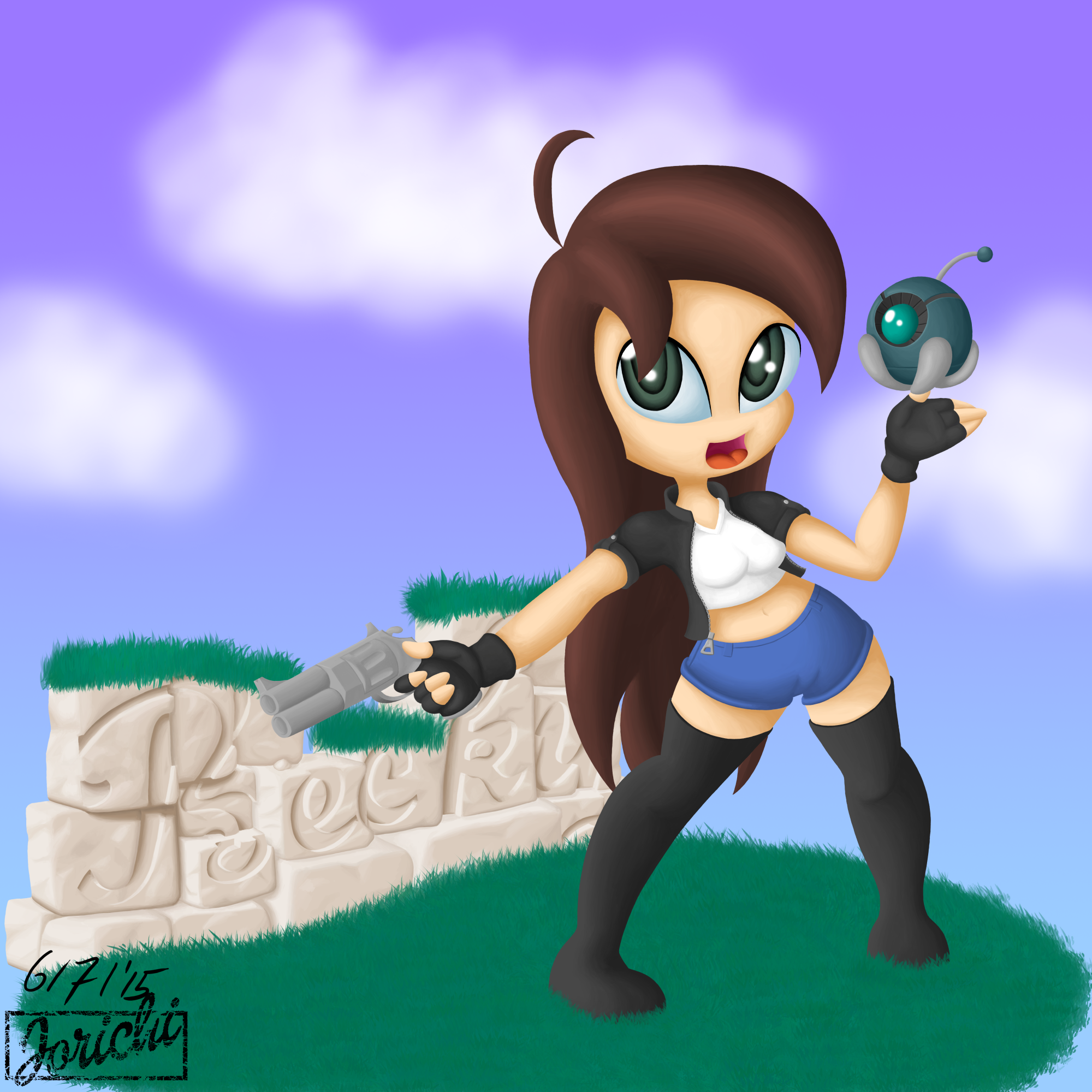 Quite a while ago I drew a sketch of a concept character that I later named Becky.
Later on I made sprites of her because I simply love spriting animations and what not.
One thing led to another and now I'm planning on developing a game with her after someone was willing to do the programming for me. But I've got some things regarding how I'm gonna spend my time to figure out first...
You can find the full story on http://jorichi.tumblr.com/ or here: http://jorichi.tumblr.com/post/120936611137/quite-a-while-ago-ive-drawn-becky-for-the-first

I've never cared about backgrounds in character portraits so I'm only reviewing the art style character herself; I like your mixed chibi style, it's pretty good. The shading is simple but pretty effective. Now, as far as strictly her design- She seems too smiley and cute to be wielding a revolver. Don't take that as a harsh thing, I just think a pair of slanted, devious eyes and a more sinister smirk would work better for her. If you draw her in non-sprite form again, I'd suggest putting the creases of her hips more at an angle and longer, not trying to be gross, but it looks like she's rocking a cameltoe.

Furthermore, if you're interested in making a game, Stencyl and Construct 2 are two programs I know of that require little to no programming and involve a GUI interface to create instances to put together games, it's great for platformers as far as I can tell, however, I unfortunately lack the motivation right now to learn even the simple functions require to put together a game.

If you do, more power to you.

Thanks for the tips! I'll try to keep those in mind next time I draw her.
Also the reason why she's smiling is mainly because of her personality. She isn't a fighter in the slightest, but due to a series of events she's put in the spot where she pretty much has to. Though Becky is the kind of girl who makes the best of a bad situtation.
I already have quite a few sprites where she's firing her gun and she really doesn't look happy there though XD
The game is already being worked on by an experienced programmer and it's being worked on using Lua in Löve2D. It's all in the tumblr post I linked ;)