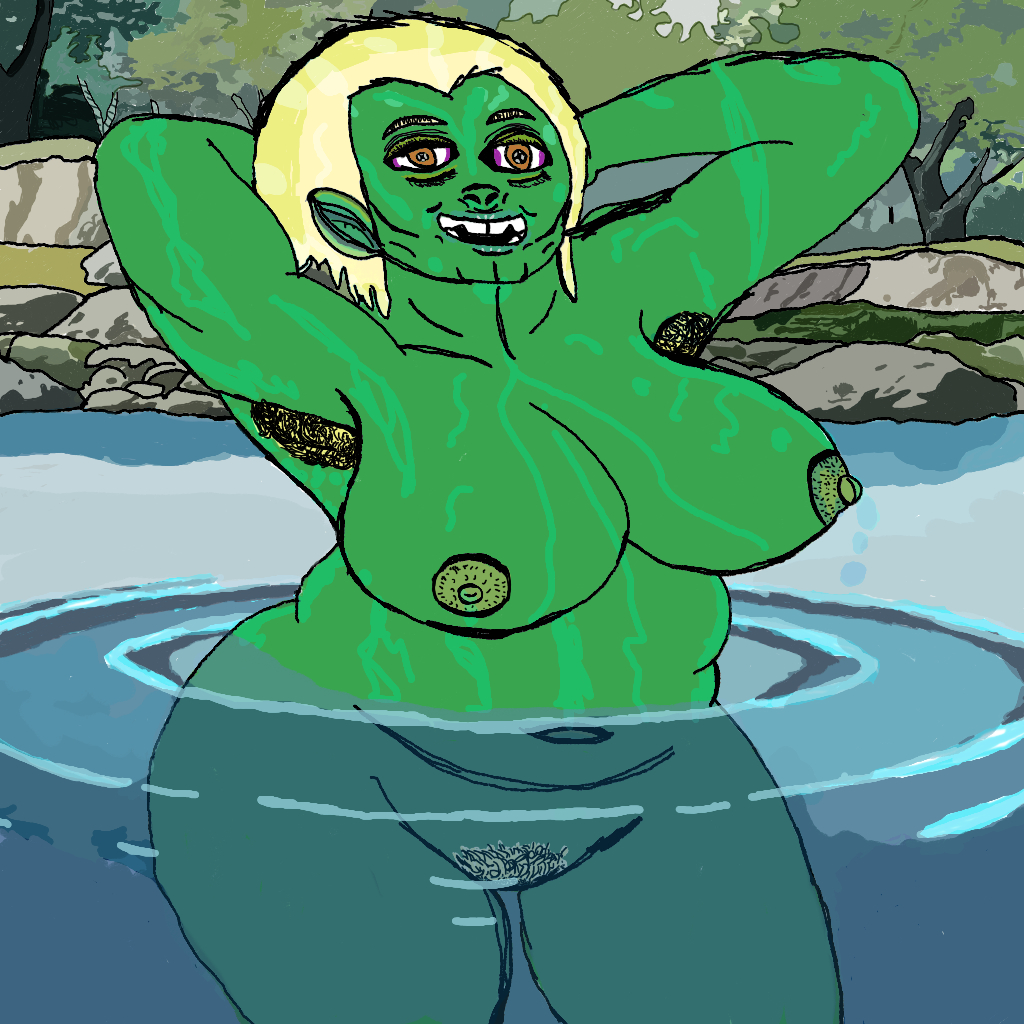 orca bathing in the lake by jonas vixen

so i have been busy playing video games and twitch streaming and the youtubing.

and i hadn't had time to finish the gif i was working on so i figure since i am rusty again.

i decided to draw the character of the gif i was making on, the model i was drawing is called orca yes i can't come up with names so the name of her species and the killer whale orc and orca for the well no clue what whale is called orca i think the blue whale anyways.

so yeah this orc is a princess orc of a kingdom her people and kingdom got kicked out by another clan so they have become a nomadic tribe. and this picture orca loves to take baths in this lake so yeah reason i drew this because i was bored and since the gif i was working on has been de-railed either al finished next year or never or maybe some moths later. and yeah still ain't a good artist and novice i used two drawings as copying tool or as i call my self a copycat artist or as they say a tracer. so i traced from two things.

a anime and some drawing that i don't know cause the link seem sketchy, so the background is from inuyasha and their is scene where the main lead the girl with black hair is bathing in a lake which why the background gave me a heart attack because cheese man did not thing it was that long what i learn from copying the background is how color and shades can make more real i really wanted finished so i only added detail to two trees, to the lake, and the rocks because oh my i didn't added detail to the leaf's yes the scene from the anime has detail in the leaf's insane for me to copy the background still a lousy artist unless you think it is impressive to copy a background with so much hard work on it.

the second picture no clue it is a picture of a muscles tan lady with blonde hair taking a shower she is looking up and again oh my i couldn't make orca look up to me she is looking straight to the camera any ways back to the drawing i couldn't copy the looking up motion because the eyes where a bit small for me to copy so i had to make my own eyes and the ear was way to low to draw around her cheeks i think and the mouth and nose small and the head small too you see i was copying either a anime novel picture or some anime inspired naked lady. so yeah the body is perfect and humanly made but the head was simple as is anime human accurately body's but the face a almond shape with big eyes tringle noses and line mouths but from the side great so yeah copy some of it the body but edit to have her tubby or a bit of fat because i wanted her to be fat and tubby but with a little bit of muscles arms so yeah fun and yeah the anime picture head was small so i had to make orc head more big because humans have more forehead then hair so yeah.

so this was a fun and yet hard copy cat drawing and i had fun with it hope you folk like the drawing thanks jonas vixen.

also here's orca without being wet and also her showing of her pussy pubic hair. if you don't see the other versions it's probably because my laptop refuses to upload the art because it ain't powerful enough to upload the art al have to buy a pc desktop or upload with my phone man.