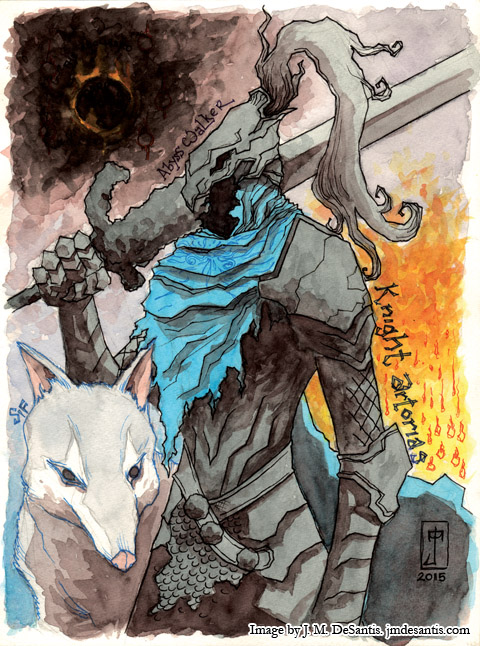 This was the final piece I created in the initial series in this new style, and the only one which I did not make a print from. It's not because I didn't think it was worth it. On the contrary! I'm just not sure how many people are walking around comic conventions looking for Dark Souls fan art.

That said, Artorias was my favourite of the Four Knights of Gwyn, and it was a powerful moment when I faced him at last and saw the truth of what had become of him. Picture here with a much younger (and smaller Sif). If there was enough demand for it, I'd love to create more Dark Souls fan art.

Watercolours and Microns on watercolour paper.

really cool style! It suits the crumbly, decrepit state of modern Lordran, too. My only gripe would be that if this is supposed to be an earlier portrait, Artie's gear should probably look more intact than it does in-game (where it's been tattered and fouled for who knows how long). Would've been neat to see you get a little creative with what his armor would've looked like in its prime - it's basically the Silver Knight set, but the extra tabards and whatnot would still be interesting. Sif also looks a bit off to my eyes, almost a bit rodent-like in the face, but nothing too bad. Also might've been cool to include Alvina in there too.

I had to draw Sif a little different than I usually draw wolves (which I found a challenge). In the game, his eyes seem small and close together to me, so I did my best to adapt it into my style. As for the earlier portrait thing, it would take place during Artorias of the Abyss in the timeline, so Sif would still be small, though Artorias had already been consumed by the Dark. At least, that's the explanation I'd give. I don't know that it's meant to be an "early portrait", just an image inspired by the game.