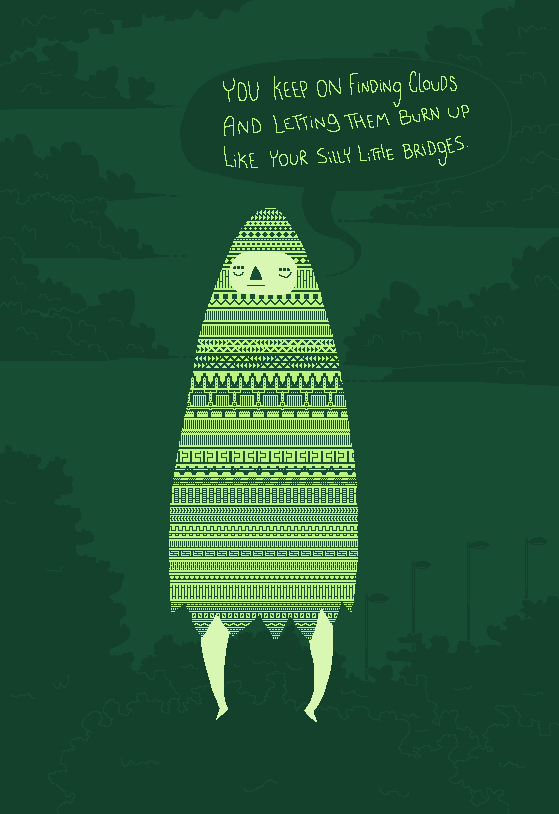 ive been using a lot of MS paint lately, so i decided to start detailing in it after so long and this is what happened

Based on the style, choice of medium, and detail, this seems more like an esoteric attempt, and it is very forced and somewhat stilted. Still, I like the movement within the figure, and I like the green.

Every piece of art has a meaning, and I suppose that this could be a sort of natural spirit condemning humans for the pollution/rape of nature, to the proverbial point of no return (or otherwise an environmental and naturalist essay depicting the ever-growing dialectic of man versus nature); however, I doubt the OP thought this far ahead. It seems like the esotericism stems from the artist, and not the art itself. A deeper meaning could be pushed or developed (for example, green and orange would contrast quite nicely, going back to what I said. Also, the implementation of the proverb sounds more like a saw--get it? [saw has more than one definition]), but, it would be quite futile in such an environment (which is a commentary on NG, rather than your talent).

Still, it is a quaint little piece, which still has the mystery and emotion that deserve praise.

I don't get it. But because it made me curious, it deserves a rather good rating :)

That is awesome... I like the clouds, somewhat reminds me of the ones from some of the older Mario games.

What IS that thing?