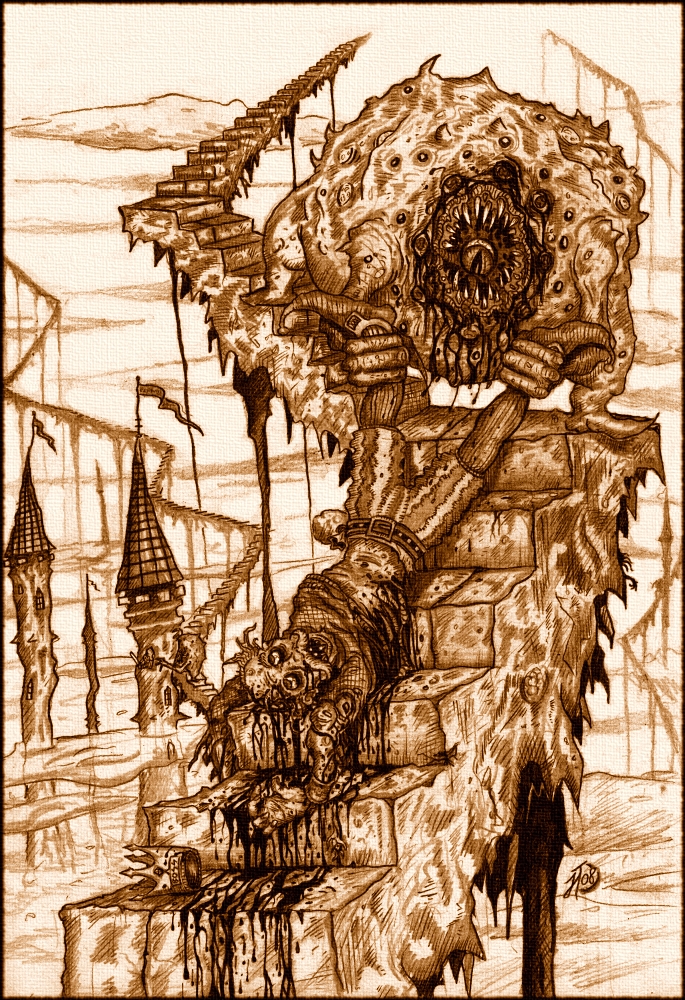 Dragger In The Stairs

Another quickie, or at least whilst comparing some of my hevier works.
I like these clubby creatures of mine, stealing people from their towers and dragging them cross the stairs to be lost in time and space.

This is really awesome I apreciate your fine detail in all of this. I wanted to ask what pencils your used? Just a brown charcoal pencil or what? But anyways I liked this alot.

I use normal b and 3h pencils, the brownish tone is added after scanning, I somehow like my work better with ia bit of color. Thanks for commenting!

This illustration to me has a really old feeling like it's part of some mythical monster who murdered kings and than dragged them up to the sky where he would eat all but their hearts. Then, when he had collected enough of the hearts from the kings, he'd use the hearts in a special stew that he would feed to the villagers while disguised as a street vendor. Once everyone had eaten the hearts, they became mindless slaves that create a castle for the monster. Then, once the village is completely corrupt and controlled, a tidal wave will come and destroy everything. Or something like that.

Hah, nice story. Can't remember if I had storie of some sort behind this, maybe it was something like yours.

I don't suppose this is based off "Company of Cannibals", is it?

Actually, no. Never heard title like that.. Cannibal Holocaust is familiar, but no for that too. I can't remember did I have any inspiration, probably some bad music.