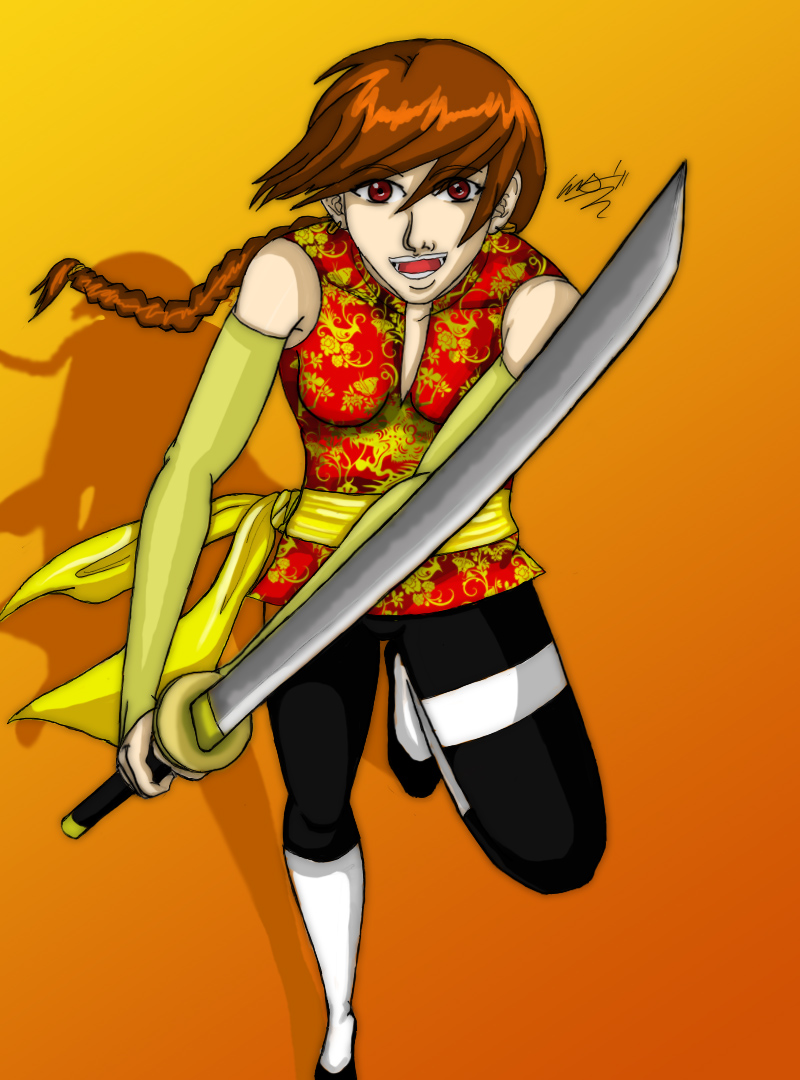 Some new artwork finally. Been trying to get out of my drawing rut and try a bit of dynamic action poses. Though I do find it funny that this young lady is way too enthusiastic when holding her weapon. lol...

Anyways, I am glad that I have done something different. :3

man are they freakishly long, the left arm especially is probably a few inches longer then the other one, both arms look pretty much about as straight as each other, yet both manage to reach the same place even though one arm is further from it then the other. scary. Sword needs more of a rounded bit leading to the tip, katana don't do go straight like that. Nose is messed up and the legs look weird too, I realise one if supposed to be further back then the other but I really ain't seeing it, it just looks like she has one fat leg one thin leg, really weird. Her braid should be moving pretty much straight, not zig zag like that, how the hell would that happen? her top and the sash are nice. But legs, arms, bits of her face, aren't so good. Half assing the background as well, but you did say this is meant to be dynamic poses and stuff. Her head is too big for her body and looks kind of weird, hard to describe but the position just doesn't look natural. I'm done, keep trying.

The background looks a bit half assed; It's just a plain gradient and a shadow, it looks like she's running downhill because the shadow isn't flat on the ground.
The colour and pattern you've chosen on the top is kinda stressful, try experimenting with duller colours and simplifying patterns.
Other than that, good work!

True, very true. I usually like to keep things simple because the backgrounds that I end up drawing looks like shit in my standards (but that's just me being a fucking perfectionist :p...), thus I end up opting for simple gradients. But thank you for your very constructive criticism. Such critiquing as yours is very rare in many art sites that I post in (it's like finding a needle in a haystack), and I find this very helpful. Thank you. :)