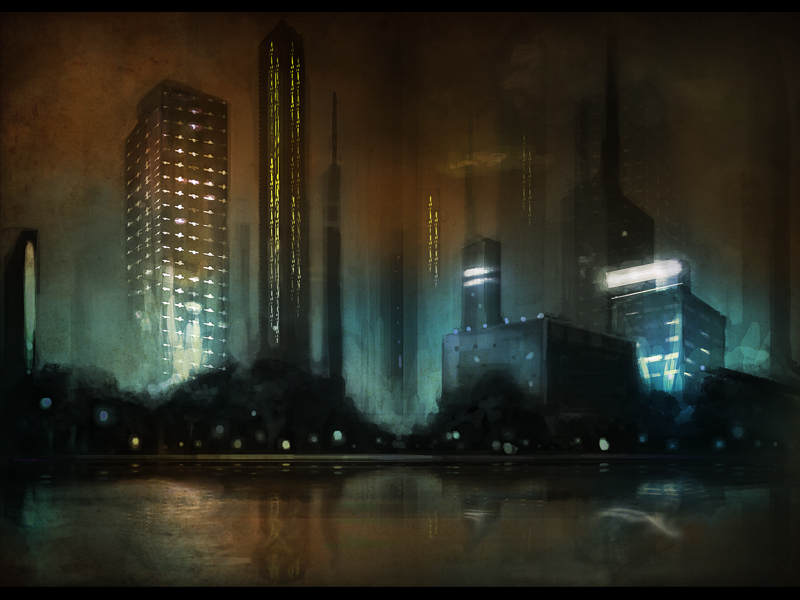 Just trying to get back in the swing of digital painting after not doing it for a bit of time.

Good job on creating the color and lighting contrast. The view would be a good background for an outdoor party, with the lake adding to the presence to the location admirably. The buildings really project the modern society, and how the buildings dominate, and are yet seem inexplicably rooted in, nature, which like the buildings, reflects its own complexity, which is one of the best parts of the piece.

Thanks for the eloquent review :)

Well, it doesn't have a lot of detail in it, but it's still an awesome picture! I think the best thing about it is probably how you didn't put any crap in it. You just tried to create a realistic picture of lights after dark. I imagine it's meant to represent NYC, given the name. There does seem to be this odd shape on one of the buildings, though. It looks like a kind of praying mantis.

I like how the lights are so colorful. They aren't really THAT colorful, it's just that they perfectly illuminate the land around the buildings. I can see a very nice river. Its calm appearance contrasts well with the more technological appearance of the buildings. I think there might be Japanese writing there too.

I absolutely love the blurred transition between the cold blue and warm yellow and I really like the distorted reflection in the water. It reminds me a little of rapture from Bioshock except with less neon.
This is definitely one of the best pieces I've seen on this site.

And to the reviewer below me: That was the Cheshire cat. It gives you a hidden password that you can enter into the computer.

Thank you man, I appreciate it

this is so realistic! love your alice is dead series aswell.... one thing... i looked in that hole in the wall on part two.. i saw a black thing coming towards me i left... wat the hell was that.... i dont want to figure out the hard way

Thank you sir. Be sure to check out Hyptosis' artwork on NG too. He's the artist of Alice is Dead after all. So if you're a fan of that game, I'm sure you'll love his stuff.