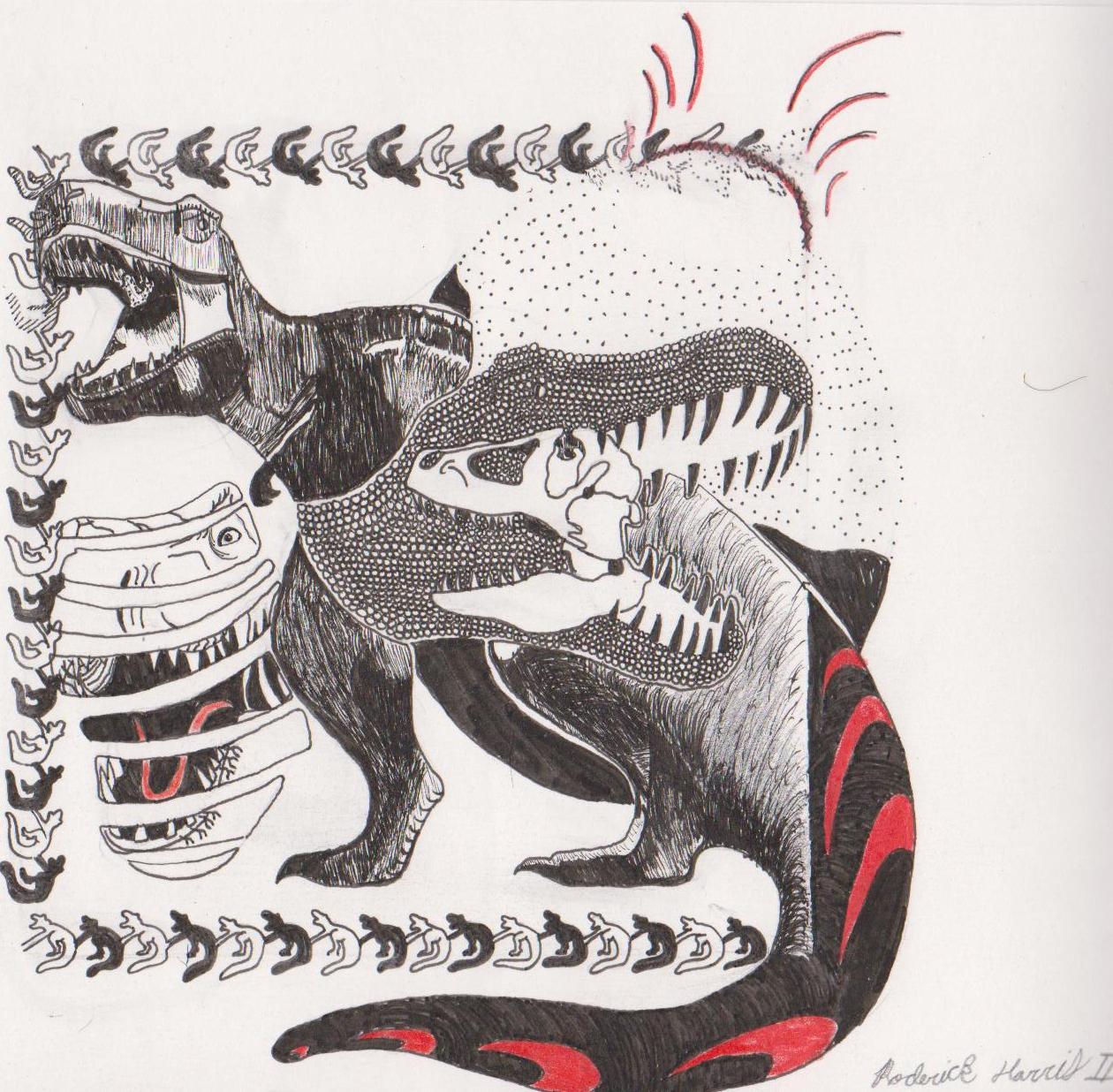 Another college project objective was to insert several elements of design. Teacher was impressed, A-.

Well this certainly looks rather weird to me since the dinosaur's body outside of the legs seems to repeat itself a lot. Then you have a lot of little dinosaurs going around the left side of the image which kind of makes me think of stencils for those as well. The signature in teh corner is rather nice though.

Background is simply white so I take it that there wasn't really anything meant to be added there.

The shading on the dinosaur seems rather good actually giving that feeling that light is hitting it from the side or at an angle. One thing that doesn't make much sense to me is that shredded egg looking thing beside the dinosaur with red and white in it. Is that supposed to be a baby dinosaur getting ready to come out?

The red and black tail is also rather different. I guess that was partial doodling idea or maybe the dinosaur is a hybrid of a normal tyrannosaurus rex.

Then you seem to have some red lines in the top right, not really sure what that is meant to be for.

Alright, I'm not too much of a good art critic, but...

What I liked:
-The outline is really cool and not seen very often.
-For having been done in what looks like pen, colored pencil, charcoal pencil, or a pencil with VERY DARK LEAD, this looks awesome.
-I like the use of a T-rex skull within the body of the other T-rex.
-The tail is also done quite well.
-I also found it pretty cool that there are, if I'm counting correctly, 4 different heads, all with their mouths open.

What I didn't like as much:
-The face with slashes through it on the left threw me a bit - the slashes make it a bit disconnected and hard to see.
-The right side of the paper is unused! D: Oh noes!

Honestly, this looks really cool. I don't have much I can critique since I'm not very good at visual art, but... hopefully what I said was helpful.

Well, the first thing that came to mind was that the main tyrannosaur shape was created using the outline around a stencil. I've seen similarly posed dinosaurs before, so perhaps that's the cliche in the piece...

Are you drawing in pen, or pencil? It's very difficult to shade with pens or ink, but you seem to have accomplished it partially. The vertical lines and the circular scales on the two heads seem to work well. On the lower part of the body, where the abdomen becomes the tail, this starts to lose prominence and it's as if you have reverted to pencil techniques, which don't work so well in ink.

The border in an interesting and complex idea, which for the most part has worked - drawing individual dinosaurs all the way around is novel and time consuming, one must expect. This does lead to a nice effect on the tail, but one that was not carried on around the egg, above the tail section, which I felt was a shame. On the shading there, you have turned the page around, as you've gone on, haven't you? This changes the angle of attack for the pen and does run the "overlap marks" in a different direction. When shading with inks, try to get one colour to flow in one direction, relative to the rest of the image. This would also indicate to the viewer the lie of the scales.

Finally, we turn to the sectioned skull on the left of the image. I'm not at all sure why it is in the image, nor indeed if it is relevant. Perhaps you were merely using it to take up a large expanse of white, within the picture? Making a decent background usually helps matter there.