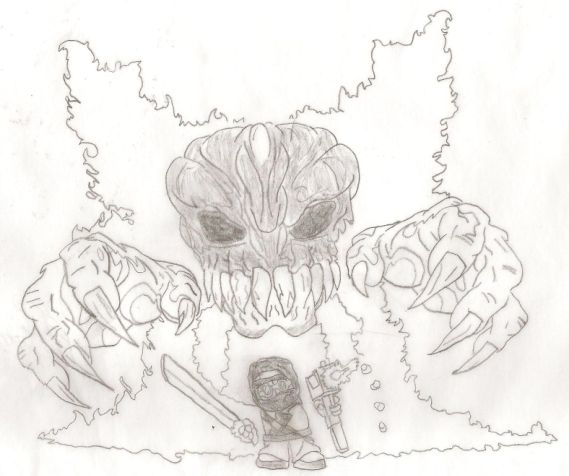 I drew this about a year ago while i was really into madness and i have about 20 more of just madness.

A very menacing image of the clown figure from the Madness series. A great piece of fan art, that really captures the essence of the clown trying to snuff out the light of Hank's painfully staunch resistance.

I think that a couple of issues need to be addressed here - some colour would certainly help, as Madness doesn't use too much in the way of colours - shades of grey and red tend to be the order of the day, with the occasional green and white thrown in there for good measure. I'd love to see the ethereal horns picked out in the characteristic red that they usually use, plus perhaps a little blood dripping off Hank's sword.

The other issue is that the clown in Madness isn't called Tricky - that was a different series, where a clown exposed himself in Clock Crew movies. This one is just called "The Clown".

I think that a more detailed piece showing Hank's face would be called for, as it's a little too cramped into a small area around his goggles, head scarf and all of the other gubbins in there.

Wow, this really looks like an awesome sketch. If only it had some colour.

The texture on Tricky's face is out of this world. It's in so much detail, and so were the hands. The hair looked too simple and didn't have much detail which kinda contrasted too much with the detailed hands and face. Also, a background might look cool.

Hank does look a little strange, as Haggard mentioned. I wouldn't have recognized him if I hadn't known about the madness series. Maybe by adding colour he can be more distinguishable.

This is a very good sketch of Tricky. Everything is portioned correctly...looks like it could have been a sketch of a scene out of one of the movies, or perhaps part of a storyboard for one of the movies. Really quite good. Of course, could have used color, but even without color, I think you could have put some more detail into the hair/flames.

Hopefully, that's a good thing. On to the review:

I really like the style! It really looks like straight out of the series. Love the details on the hands and face, it's so detailed that I'd almost think it was a trace.

I'd also like to see the colored version. Or better yet, a remake, that is colored.

It's a very good sketch. Many details and very clear outlines. Only Hank looks a bit "unclean", but I think this is because of his clothing.

I would like to see this with colors added, it would give the pic this little extra kick it needs to get a 10 from me. ;)