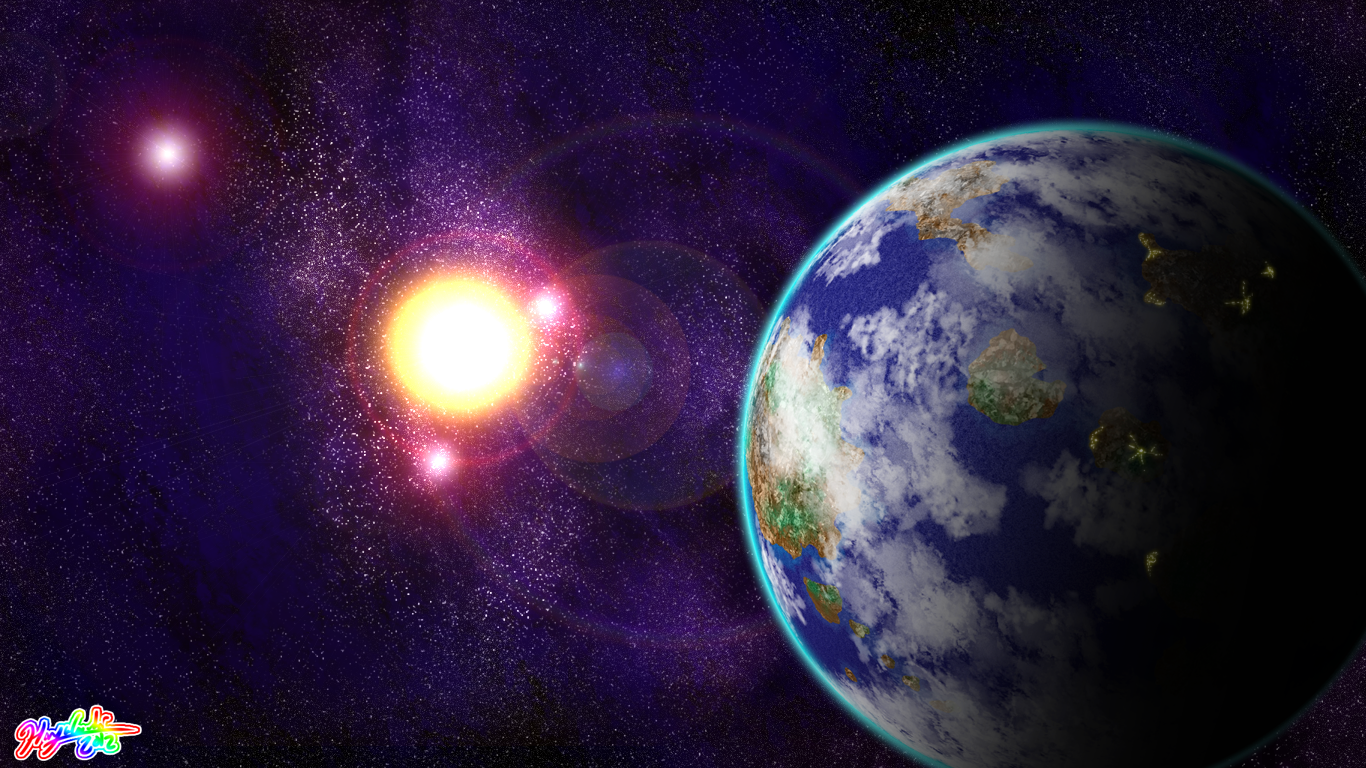 This is my third attempt at making a realistic space scene. It may not be much, but I plan to add to it later. I was thinking of adding explosions and making it look like an interstellar conflict. Later, I will use the planet for a meteor impact piece I plan on doing sometime soon. Before I say anything, yes, I used lens flares for the bigger stars, but I also erased the film parts of it, so it doesn't interfere with anything. I think I finally got the shading on the planet right! Oh, here's a nifty little trick I did, as well. I used a stock satellite image to make the planet appear inhabited. It was a PAIN in the ass to do, but I think it worked. Overall, pretty happy with the way it turned out so far. I can't wait to see where I can take this in the future. :)

Your Earth is Fantastic. How? How can you have such an amazing grasp on color and lighting when it comes to this, yet you continue to roll out the sub-par anime girls with sub-par color and lighting? It boggles the mind. I love your space background. Now for the bad: Space is not that well lit. Also way over use of Lens Flare, which you should avoid. It's a crutch (I'm guilty of using it too, everyone at one point has fallen for it's easy use.) You really should try and avoid using it. Nantes is right Filters are a crutch and the clouds could use some "oomph" but I am willing to forgive that due to you marrying the filters well. (Many will disagree with me on that one) So take heed of Nante's words, they ring true. Just keep practicing.

Thank you. I will practice in all areas of my art, not just space. Thanks for that little bit of inspiration.

hate to say it but filter overuse is very obvious here. that said, I myself suck at photoshopping so take that observation with a grain of salt because I honestly don't know how to help you with that part...however what I can legit say is that the clouds swirling over Earth (?) don't look alive, more dead and just 'there', y'know? google 'earth in space', etc... even the famous 1969 snapshot by Apollo is extremely dynamic, you can actually SEE the earth is ..alive, moving. A cause to this problem on your painting might be due to the dull, almost one-tone blue shade, the texture would not impose life or the idea of rippling tides to me because it seems almost papery like the stuff you see on cardboard paper. Play with the concept of contrasting color schemes. There are light blue and dark blue tones on your Earth, sure, but the transition is too dull to look REAL. like... for instance, in the 1969 snapshot, almost all of the earth is a dark blue but also rich in color and the very bright, almost cerulean shade thinly surrounding the ends of the sphere adds more to the depth. Imagine if that bright tint wasn't there?????? Also, the clouds (!!) on the snapshot on the south pole are very dynamic, has a very rich 'body'. Notice how there are varying thicknesses and shapes?? If it was all one flavor it would have looked very flat and boring. The swirls over the bottom tip of Africa and around gives the general atmosphere (literally) a very alive and moving feel in contrast to your painting. Also, the edges of the geographic plates on your painting show up too much next to the water. I would never advocate the blur tool however I'm fairly sure this could have been remedied some way or the other by making the transition more subtle.

NOTE: I was under the impression the 'blue marble' photo from NASA I referred to was taken in 1969. Apparently it was actually from a 1972 mission.

Also the other reviewer is right. The realism is ruined also by the brightness of the surrounding space. Generally, if taken from the planet's focal point, it would be much blacker and darker especially considering our own planet is more than 4.5 light years away from the closest star excluding the Sun. And please. NO LENS FLARE. It automatically horridly stenches an otherwise potent drawing every. single. TIME.

Not trying to tear ya to pieces though, since this was only the third try right?? I do admittedly like the purple and yellow contrasting with each other, I just don't think it'd be necessarily appropriate in a realistic planet scene.

No, no, it's fine. I understand where you're coming from, and yeah, as I continue to do space art, I will continue to get better and better! I appreciate your feedback!

I'm definitely taking your suggestions into consideration, considering how little experience I actually have with space art in the first place. This is only a new thing that sort of popped up for me, so yeah.

I'm a big physics buff -- hell, I'm writing a scifi book. As such, I'm thrilled to see space work. I like what you've done here, and the background of the universe is great. But, in my opinion, it's a little too bright for space. I'd be interested in seeing some nebulae or other cosmic giants. Just the same, nicely done :)