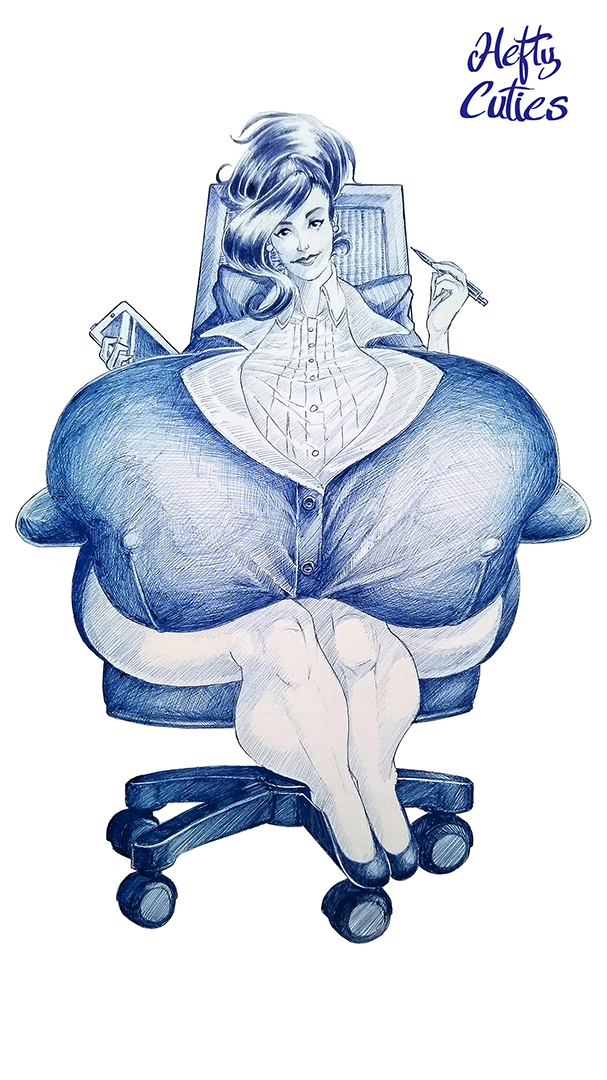 Second of two Illustrations of my character, Simone.

They came with a bit of story.

“The year was coming to an end.” This thought made Simone sight in relief.

While she had been accumulating promotions at an impressive rate, the challenges 2020 brought with it had been considerable nonetheless. Now was a time for pondering. Her new role as business intelligence lead manager was a golden opportunity, and she absolutely intended to make the most of it. Otherwise, the new year was at the door, thus it was time to meet the team and set the tone for the year to come. As usual, she arrived considerably early in the meeting room. She liked the time it gave her to clear her mind and review her notes while calmly sipping her cup of tea. She squeezed through the already large glass door frame, flicked the light switches on and proceeded to walk to her designated chair. While she lowered her massive bottom on the seat, she had a slight smile. She couldn’t help thinking of the sheer excessive nature of this otherwise mundane act. Indeed, the company had provided her a set of XL office chairs to use in every room she had the habit of working in. A gesture she really appreciated because of her extravagantly stacked body. It did not allowed her to sit on any standard office chair; she would just not fit. The ones they got her were large indeed: they could have supported with ease two normally proportioned people. In her case it was a truly tight squeeze. The arm-rests had to be extended on each side, almost out of reach of her arms. One would think it would have been an issue but they were really useful in the way they squeezed her breasts, letting the executive use their ample mass as a table of sorts for her tablet and office supplies. Top it off with a reinforced steel base to support all that weight as well as a taller back rest to compensate for the extra height her cushion-like behind gave her... the end result was a pretty tremendous chair. This did nothing to minimize her already overwhelming stature during meetings. If anything it enhanced it, making her the center of attention at all times.

Even before she was a manager, her vast frame, excessive curves and straight-to-the-point personality ensured she could get all eyes on her if she needed them to be. At times, it felt like people could be intimidated by her, (which she secretly enjoyed too) but she was also a friendly soul who was keen on making people confident in the role they occupied. She enjoyed being in charge and showing energetic leadership in the way she got things done. She was a team player at heart. This philosophy, coupled with recent work achievements, ended up getting her the well-deserved lead manager title.

Still, her promotion was a recent thing and her team had been working from home most of the year, so she had not yet had the time to properly get acquainted with each of them. Some of them were so new that she only had the opportunity to see them through the eye of a webcam. Today was the day this would change.

She wondered how they would react when they saw her for the first time, in the flesh. Would they flinch? Or blush? Or just stutter for a while? She had seen all sorts of reactions with colleagues throughout the years, and pleasingly a vast majority of them had been respectful if not surprised or just plainly cute. Inside of her, each of these responses filled her with satisfaction and glee. That said, she could also consistently feel the attraction she was emitting towards some male and female colleagues. At times, the sexual tension was so thick you could have cut it with a knife. She was not necessarily actively enticing people, but with a body like hers, well... just walking was all it took to make some heads turn around. Fortunately, she had the pleasure of working with extraordinarily respectful people who knew which boundaries not to cross, a rare privilege in a workplace. This climate of mutual “laisser-faire” allowed Simone to somewhat satisfy her exibitionist side while her colleagues had a pleasant, shapely form to look at. It was a win-win situation, really. In any case, she didn’t have the capacity to hide curves of this magnitude anyway.

The young executive stayed like that for a while: wondering and pondering, stuck in that pleasant reverie while slowly savoring her tea. Suddenly, she perceived some movement in the office. She quickly glanced at her tablet and realized how much time had flown by. The reunion would start in a few minutes. Simone did not mind it that much: she was confident in the speech she had prepared and didn't feel like reviewing it further was really necessary. The door of the meeting room opened and the first attendee stepped foot inside. Simone saluted them while they sat down. The two coworkers then made a bit of small talk for the following minutes. Soon enough, each other attendee arrived, and the room was filled with the dozen people she was expecting. Simone quickly and assuredly picked up her tablet and stylus.

She crossed gaze with her subordinates and warmly welcomed them.

"Good Morning, I am Simone your manager!” she said. “Some of you already know me very well and others might recall my image over the webcam, but I believe that for some, this is the first time we meet in person. To those people, I am thrilled to make your acquaintance, and also very eager to work closely with each and everyone of you!"