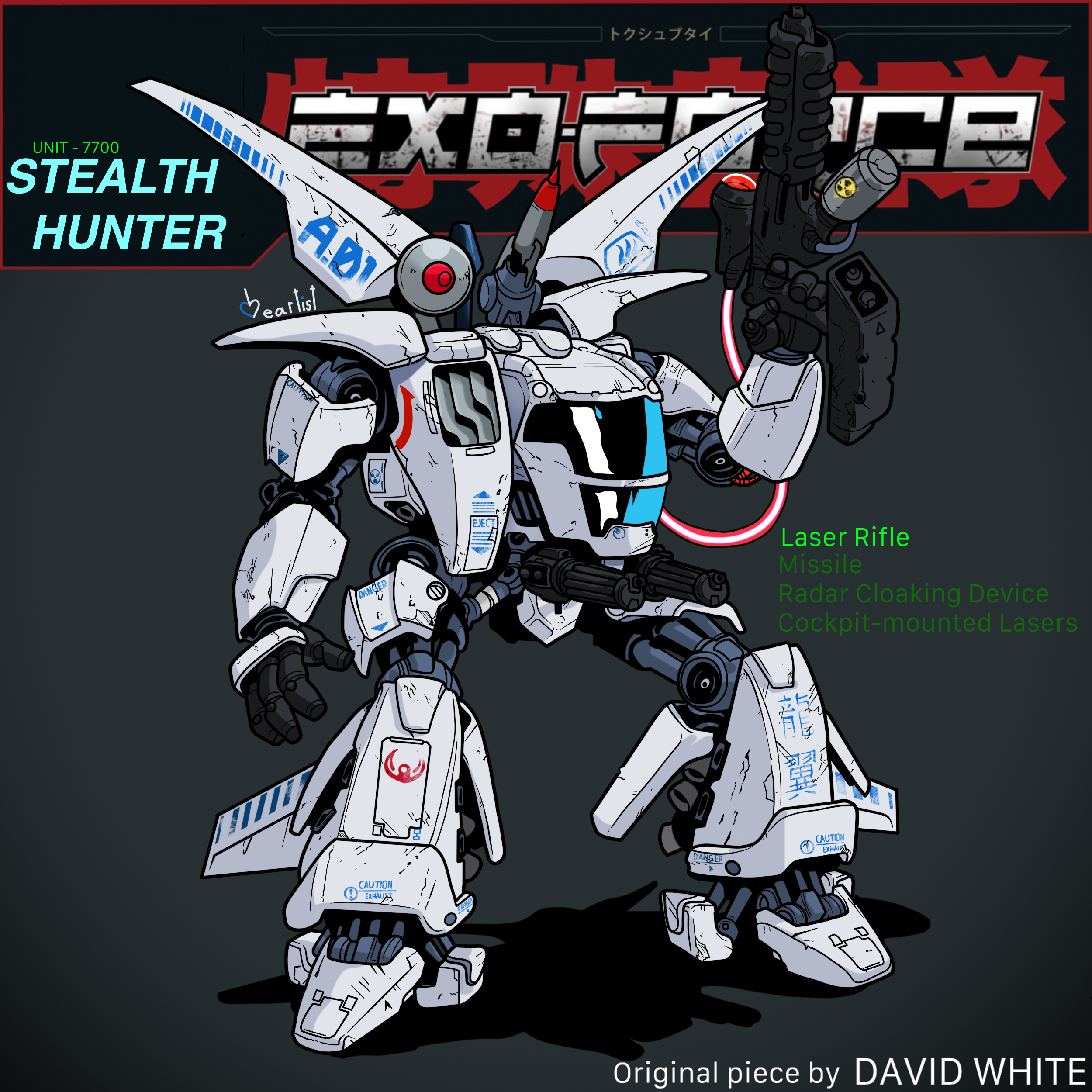 This is a redraw of concept art for the Lego series Exo-Force, originally drawn by artist David White.

Comparing the two will show how they're mostly the same, but there are a few choice differences. I left off the bumps that simulate Lego bricks, changed accessories like the missile and radar dish, and added more toy-accurate decals. I also added the usual smattering of battle damage, but less than I usually do. I kept it more restrained than I usually do, wanting the Stealth Hunter to look worn, but not to the point that it's falling apart.

The finalized design of the Stealth Hunter is a bit taller and lankier compared to its squatter and stockier appearance here, but it still feels right. David brings this incredible sense of texture and weight to it, even in a rough sketch like this. Art like this was what heavily influenced me when I was young. It's why I love to draw machinery the way I do! He's incredibly talented, and deserves recognition and respect for not phoning it in at all when making art for toy packaging. It's art like this that inspired me, and will hopefully continue inspire others.

I'm a huge fan of mecha, and Exo-Force was something that planted love for the genre in me when I was young. My brother got a set or two, but beyond that, our exposure to it was relatively limited. We played the online games and read the comics for it, the former of which have sadly been lost to time.

I hadn't thought about it for a long time, if I'm being honest. But a few months ago, I stumbled down a Youtube rabbit hole of reminiscing on old, retired Lego themes. Nick on Planet Ripple has made a series called Lego Rewind, something I didn't know I needed, or would come to love. What could have easily been him reciting a wikipedia article for each video instead feels personal, and nostalgic without feeling pandering. It's a genuine passion project, which indirectly lead to this passion project.

I was out shopping with my mother about two weeks ago, and we were in the store to get a handful of things. We passed by the Lego aisle, and got into a surprisingly deep discussion about it. I wasn't expecting her to be so invested, but she talked about how disappointed she was that Lego mainly puts out products that are merchandise for other franchises, mainly superheroes like Marvel and DC. We talked about how most Lego sets go against the initial conceit of the Lego brand, being that there's no "wrong" way to build. Nowadays it seems like every set has only one intended purpose, with a few gimmicks here or there, and that's it. Lego Rewind often talks about how the retiring of old Lego themes feels like a loss, as old lines like Exo-Force prided themselves on official alternate builds, even promoting them on the boxes. It might seem weird to complain about, but if that's the concept that kids are learning at a young, developmental age, where will that leave them when they're older? I love Marvel and DC, don't get me wrong. But Lego's original themes are something I sorely miss. The creativity of them perfectly aligned with the idea that you should be original and build what you wanted to build. They recently ran an online poll for what we'd like to see as an anniversary set, and the answer was a resounding "BIONICLE." It got me thinking about how awesome an Exo-Force revival would be. With the engineering that Lego has now, they could make things beyond our wildest dreams. The mechs they make now, for other lines, are absolutely stunning. I doubt they'll ever bring it back, but I do also keep that hope alive.

I wasn't expecting to think so deeply about this kind of stuff, but I'm genuinely glad that I did. Being taken by surprise and getting incredibly invested and passionate about something you weren't intending or expecting to is one of my favorite things.

So what do you think of all this? Did you grow up on Exo-Force and other old Lego themes? Which themes would you like to see them bring back? Be sure to let me know, I always love to hear your thoughts!

Exo-Force was really sick but I always got Bionicles instead.

Still, Exo-Force was a really good line and I wish it got more love.

From what I’m hearing, that seems to be the common experience. I missed the boat on Bionicle, missed the chance to really get into it.

Exo-Force has tons of potential, I’d love to see it be brought back and fully realized.

Glad you think so!

Bionicle was better, as you could throw them down the stairs without them breaking apart. The rubber hair was cool though.

That’s fair. Bionicle had much more sturdy construction. I kind of missed the boat on it, unfortunately. My brother and his friends were all over it, I only caught the tail end of it, and by then it was over. Still gotta recognize it as the legend it was!