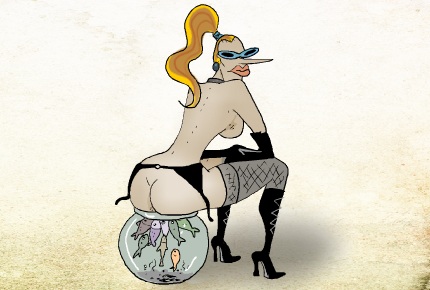 yep
i know
i am a cool artist

~~SUGGESTED IDEAS~~
Some background design or pattern would be really cool

Well, it's a big hard to say whether this is good or bad. I guess in the strictest sense, it's probably good because the artwork isn't that bad. What I didn't like was, well, it's one of those things where it's hard to find stuff you like or not. It's like Roger Ebert's review of "The Human Centipede". I am sure there is a fetish like this around somewhere, given Rule 36. This actually looks like the kind of artwork that would be featured on a Hallmark greeting card.

Granted, you'd have to be one sick person to buy it, but it's rather colorful. I always thought that your name sounded like goldfish as fish are featured in this. I'm guessing it's more of a fish food up your butt fetish? Hey, it's still not as deranged as "2 girls 1 cup" at least. It's cool how the panties are worn in a fashion like that.

You earn a free vagina for this masterpiece!