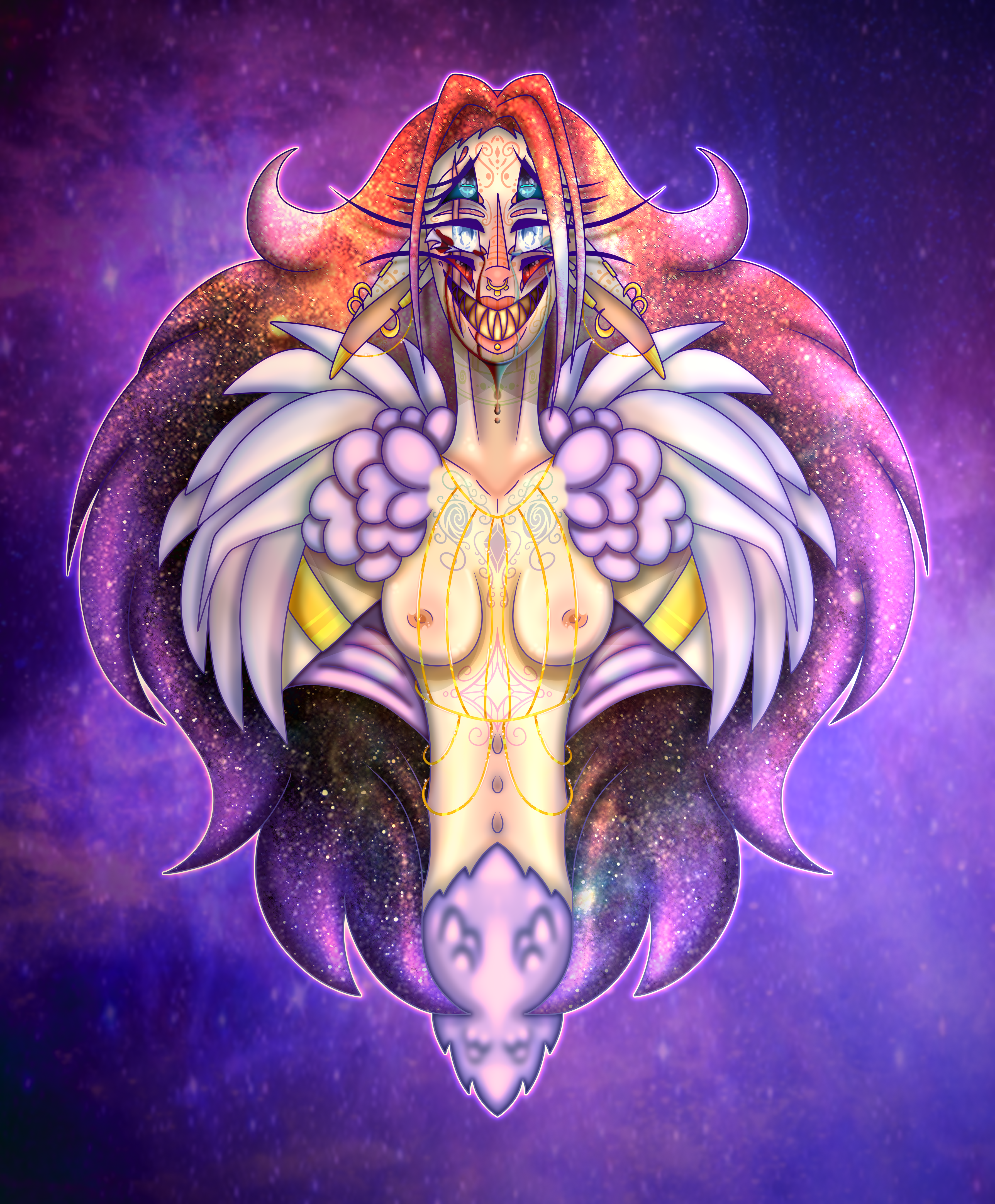 Only at times when mercy is the most needed, does she appear. A being of massive size, holding you on the tip of her pinky fingernail, staring into the deep pools of her six eyes, infinite oceans swirling with caring and kindness and love and heartbreak, depths of blood and molten iron and bismuth bubbling with rage and carelessness, with apathy and hatred. She sees right through you, past the core of your soul, judging things about you that you wouldn't even know, then she decides if you deserve her motherly mercy, or if you'll be sent back to where you were, and you'll know, from either the crystal clear tears or lava leaking from her eyes. A Matron of most gods, with 3 belly buttons from the umbilical cords that gave her life within the womb of the mother before her. Her nakedness is not sexual or for pleasure, but that she holds no shame in what she is and looks like, her confidence radiates off of her so thick the space around her is thick like honey with the same golden hue. She has no sense of shame or humility, and clothes only seem to get in the way of moving, she does however decorate herself with the finest metals from plants with ungrateful and war-bearing inhabitants, so she showed mercy by crushing them and harvesting what she wanted. Those who meet her and live say she's an angel or THE God, but she is simply another being like us, just one far beyond our intelligence and beauty, one with so much power she could crush the Earth between her thumb and index finger, simply floating through the endless galaxy, her hair swirling around her often being confused for more far off galaxies we can sometimes glimpse. No one has heard her voice or even knows if she does have one, but many speculate it is soft spoken despite her sharp incisor teeth, but one powerful enough that if she screams she will bring on the end of the universe, shattering reality on all frequencies, death would be quick and instant. She is the definition of elegance and gentleness, yet she holds the most anger you could never imagine, the bubbling rage that builds in your chest that feels like a wildfire with a thousand tons of weight on you, you see red then black and your face goes red and your ears hot and you scream so hard your voice starts to go out, that hatred and anger is what we know, but she knows a much more destructive and horrible kind. The feathers decorating her shoulders and upper back are the softest materials to ever be felt, and people go mad never being able to find something as soft as her feathers. Her lower body is a feather-covered snake body, lined with feathered wings on the sides, many will refer to her as Quetzalcoatl from ancient Mesoamerica, the feathered serpent god. She has a webbed membrane connecting her underarms to her sides, light refracting through them like prisms, creating beautiful rainbows. The intricate markings on her body and face are not makeup or paint, they are patterns in her skin.