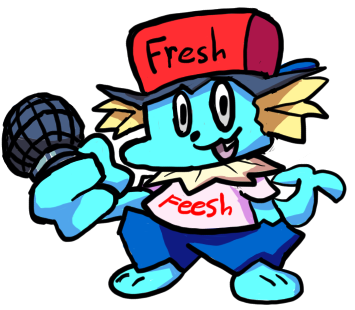 They say the beginning of a journey is a single step.

In my case, I begun mine with a single frame of a mod I want to make of Friday Night Funkin' (It took a lot of time to make...), specifically a frame of the main character of the mod, Vaporeon (replacing Boyfriend)!

Also, I am willing to accept feedback especially on the shading, because I don't really know all the ins and outs of Friday Night Funkin's shading style.

hey guys, did you know, that in terms of rap battling, vaporeon is the best? not only it has featured in that one degenerate /vp/ copypasta, vaporeon is also capable of using the move attract, which means that everytime it raps or sing it attracts women around it, which makes him a better man that boyfriend.xml. unlike boyfriend.xml, vaporeon has baby doll eyes which makes him 18369x cuter and wholesome. in fact, vaporeon is also capable of using the move hyper voice in order to make its opponent's ears bleed to the point they stopped their rapping career. such victims of vaporeon's hyper voice are eminem, phantomarcade, and even boyfriend himself. if you give your vaporeon a normalium z, it can use the move z-celebrate in order to boost its stat and make its hyper voice louder, to the point it kills its opposing rapper. and thats how vaporeon is the best rapper out there, ungodly move power and the ability to learn z-celebrate

I didn't even think of that! I find this response quite hilarious! Lol.
I can't even imagine how long it took to type all of the joke.
Also, I didn't even know about the /vp/ copypasta. Then again, I was around 8 when the copypasta became popular.