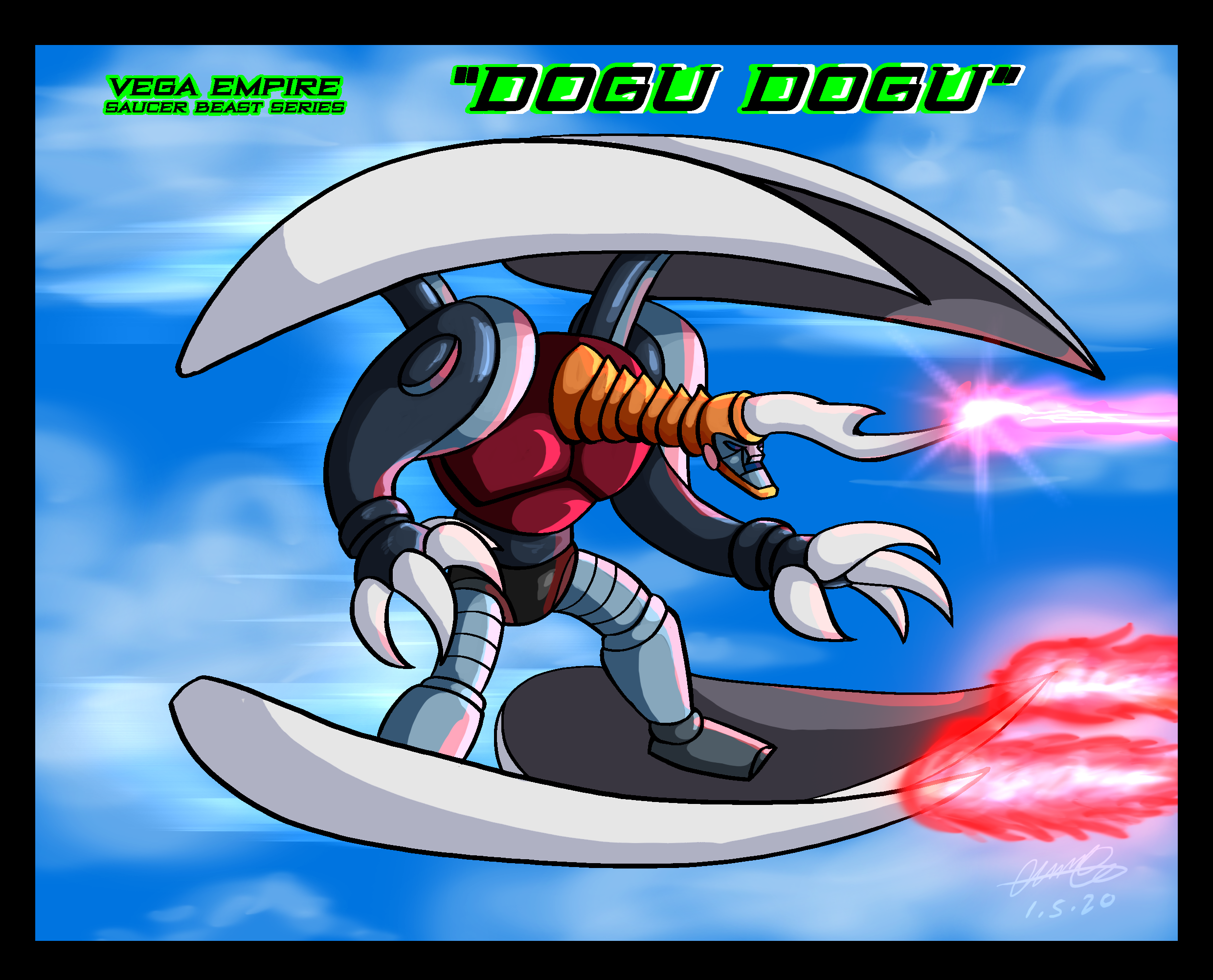 Dogu Dogu was the Saucer Beast of the week on Ep.24 of UFO Robot Grendizer Anime. It was a humanoid type Beast and Mecha of Captain Whiter, with a Red Torso, a Black Pelvis, Grey Legs and Dark Grey arms, with claws for fingers. It had a long orange neck and head, with a big horn in the forehead, with a grey face, it had a pilot cockpit located in the mouth. Its UFO forms seems to been an oval disk, and the shell open up in four segments. It's arsenals were a Pink Laser discharge from the horn, Red flames coming from the lower shells, and the two Shells on top serve as large Boomerangs.

When a massive Minifo Flotilla is launch to invade Japan, Duke launches Grendizer to give them a warm welcome. As the Grendizer decimates the large attack force, Blacki orders a retreat when his signal is cut by Capt. Whiter, of the Vega Communications Department in the Guards Station, Gandal intervenes informing him Whiter is under direct orders to kill Duke by Vega itself, much to the dismay of Blacki. As Whiter approaches Earth on his Saucer Beast, it hooks up to a NASA Spaceship and use it as cover to land in the middle of the ocean. Later, when a NASA vessel arrives to investigate, Whiter (already inside) kills a scientist (Dr. Space, no kidding, that's the guys name) and takes his form. Afterward, Whiter heads to the Observatory, where he shows small space rock to Prof. Umon and Koji, informing more of these are floating in space.

As Koji takes flight on the TFO to pick some of the stones, Daisuke enters and expresses his concern of allowing Koji to go alone in the wake of the TFO attack, Umon reminding him to lower his tone, though Daisuke express to allow Dr. Space to know his identity, though his father insist to maintain his identity secret. Umon leads Dr.Space/Whiter to a room, while Daisuke launches UFO Robot. Whiter calls Blacki to launch an attack on the TFO, which he begrudgingly carries out.

Koji is swarm by Minifo's and makes a valiant stand, he is hit, Duke arrives to destroy the attack force, Koji retreated, while Duke carried on his mission, then returns to Earth with Crystals. Whiter watching everything from his portable computer, gets ready to ambush Duke, at one spotting Danbi on screen, when Umon enters and informs him of the success of the mission, much to the Assassins dismay.

A bit later, Whiter finds Danbi resting in the woods, he drops his disguise as means to allow him (believing to be Duke) to recognize him, as he was part of Vega's assault on Planet Fleed: naturally, when Danbi doesn't recognize him, thinking all is a dream, Whiter puts the pieces together and assumes Daisuke is Duke and runs back to the Observatory. On his way, Hikaru spots the Assassin transforming, speaking out loud and she runs towards the base to warn Daisuke. Whiter arrives first, when Hikaru comes in screaming Daisuke's name. When Whiter realizes she knows who he is, he tries to strangled her, but she escapes calling for help. Daisuke takes a peak from the window when he recognizes Whiter immediately and throws his necklace at him, wounding him. When he jumps out from the upper floor, Whiter has his suspicions confirm and runs away, Daisuke changes into Duke and takes off on the Grendizer to stop him.

By then, Whiter had already joined up with his Mecha and the two fight, Dogu Dogu using its arsenal to take down the Mecha to little effect. Grendizer uses its Screw Punches to destroy the Boomerangs and finally fires Space Thunder, while Dogu holds it back with the Laser Beam, and it pins Grendizer down to the ground. Duke uses Melt shower in a surprise move, then lifts Dogu up with Anti Gravity Storm. Dogu Dogu explodes, killing Whiter in the process. After the battle, Hikaru returns Daisuke's necklace: he still asks her to not come to the Observatory do to the dangers, but she replies she will as she hates those who intent harm the Earth.