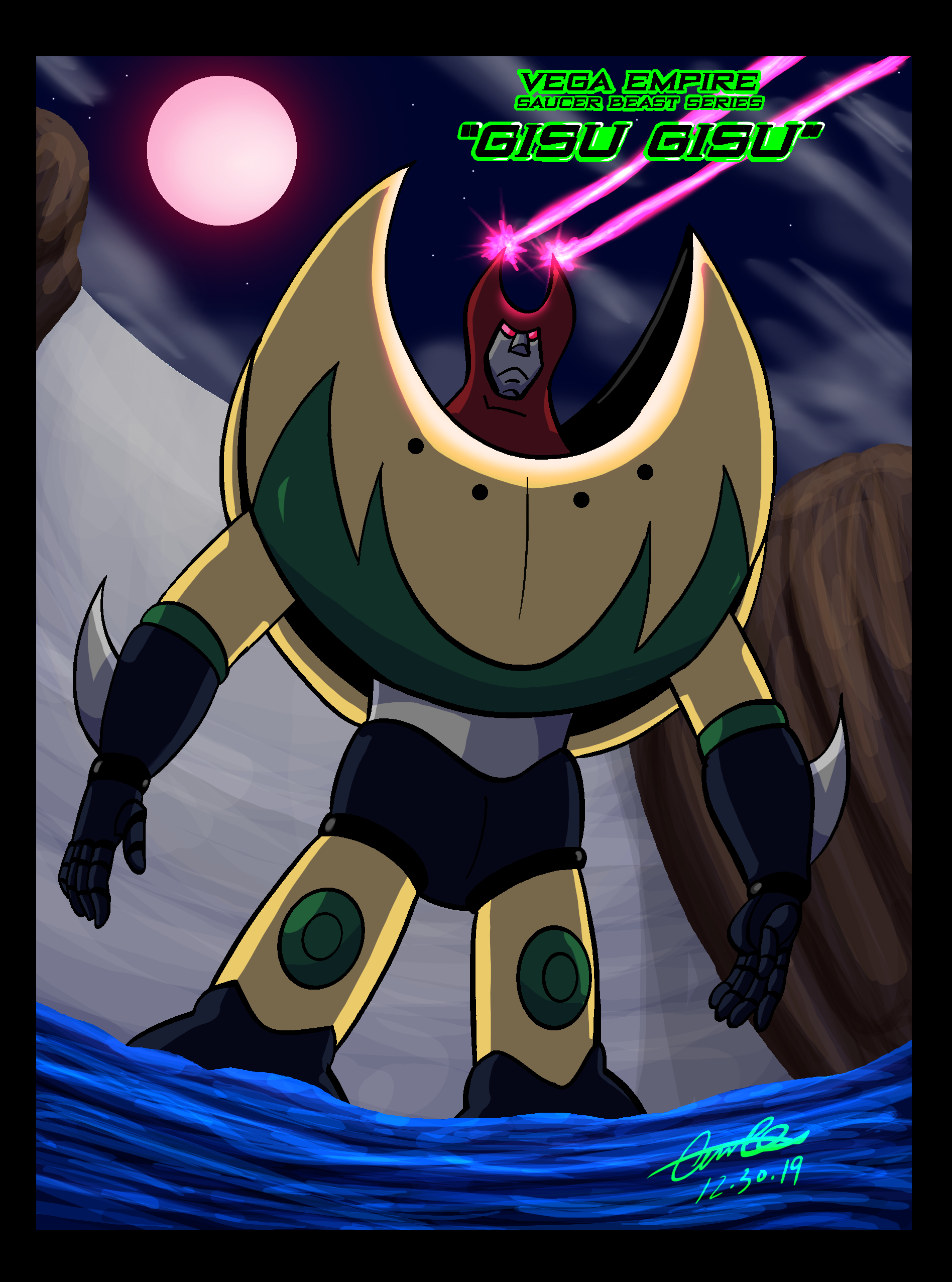 It is Monster Monday Midnight!!!

Gisu Gisu was the monster of the week from Ep.23 of UFO Robot Grendizer, where Hikaru learns of Daisuke Umon's true identity as Grendizer's pilot Duke Fleed when he transforms to save her life, a fact that would have important ramifications for the character later on the series. Gisu was a humanoid Saucer Beast, Yellow and Green in color, with dark blue forearms and lower legs, with gray curve blades on the arms and green color kneecaps. It had a red head with horns and a gray face with pink eyes. Its upper body is compose by the shell of its vehicle form, which is the traditional disk shape saucer with a gray shield on the forward end to protect the head. It was capable to remain submerge underwater, fire energy beams from the tips of the horns and grappling cables from four port holes in its chest, and missiles from another set of launchers coming from the protection shell.

At the Makiba Farm the Horse start acting odd, one of them, Shiraba going rouge and escaping. Danbi looks up in the sky and sees a UFO landing in direction of the forest, he calls Hikaru to get Daisuke, who is at this point at the observatory with Umon and Koji aware of the new Saucer Beast, which is heading in direction of the Basin reservoir at the forest. Daisuke takes off on Grendizer to investigate when at that moment Hikaru arrives asking for his, informing everyone of the horse and Danbi searching the woods for it, realizing the severity of the situation, Koji goes with Hikaru to find them. Grendizer flies over the Basin and shoots, forcing Gisu Gisu to emerge: in the scuffle, Gisu shows itself to Danbi. His horse is scared and Danbi falls, been dragged through the woods when Koji and Hikaru show up and save him. Meanwhile, in the scuffle, Grendizer breaks free from the monster, and Gisu Gisu escapes, with Grendizer going after it, when a battalion of Minifos attack, Duke disposes of them, but Gisu escapes by hiding in the clouds.

Once at the Vega base, Blacki and Gandal take notice of Grendizer movements on their radar in the last battle, coming to the conclusion his secret base is somewhere with in a 10 km radios of the zone they studied. The villains plan to destroy the 3 damns to flood the valley below in hopes of destroying Duke's secret base. Meanwhile, at the farm, Daisuke comes under intense interrogation from an angry Hikaru, demanding to know of his whereabouts the night before, but when Danbi try to sneak out to search for the missing horse, Hikaru takes lead in its search, unable to trust Daisuke, still he follows under orders of her father. Meanwhile Gisu Gisu and Blacki arrive on the 3 Damns with the beast taking refuge underwater. Not far, Hikaru and Daisuke continue their search when they find Shiraba near the damns. The mare runs from them with the two going after it. At the tail end of their search and close to a steep cliff, Hikaru, too obstinate to listen and angry with Daisuke, demands to know the truth of his whereabouts when she falls from her horse to the river below. Daisuke transforms into Duke and saves her from hitting the rocks, letting a horrified Hikaru to learn the truth of his identity. After taking refuge from the rain and learning more from him, she leaves, demanding to be alone, at that moment, the ground shakes when with the Damn beginning to develop cracks. Daisuke changes to Duke to investigate only to find Blacki holding Hikaru (that was a fast catch!).

Blacki demands Duke to bring Grendizer so he can sink it to the bottom. Duke agrees, and returns with the Mecha and Blacki let's go of Hikaru as promise, Gisu Gisu comes out and attacks, destroying the lower damn, washing Grendizer, the beast then proceeds to attack the middle damn, when Grendizer returns, but too late to stop it, and the 2nd Damn breaks way washing both giant robots down stream. The beast kicks Grendizer, breaking free from its grasp and goes after the 3rd Damn, while Grendizer hits large rocks down stream, Hikaru comes to warn him about the danger to the final Damn, Grendizer rapidly stands up and reaches the area on time, to have the final confrontation with the Beast.

Grendizer takes him first down with Screw Punches, destroying the shield protector, having the head expose, the mecha then stands in between the beast and the damn when it fires grappling cables onto Grendizer, and fires it laser, but the Spazer is called and destroys the horns with Melt Shower, then the mecha frees itself with Shoulder Boomerangs. Finally, Duke disposes of the Beast by decapitating it with Double Harken and finishing it off with Space Thunder. Blacki is seen escaping vowing revenge.

After the battle, Hikaru comes to terms with Daisuke's identity, realizing why he keeps it a secret and his importance to protecting Earth from Vega, vowing not to tell anyone about it, in that moment Shiraba shows up returning to the two.