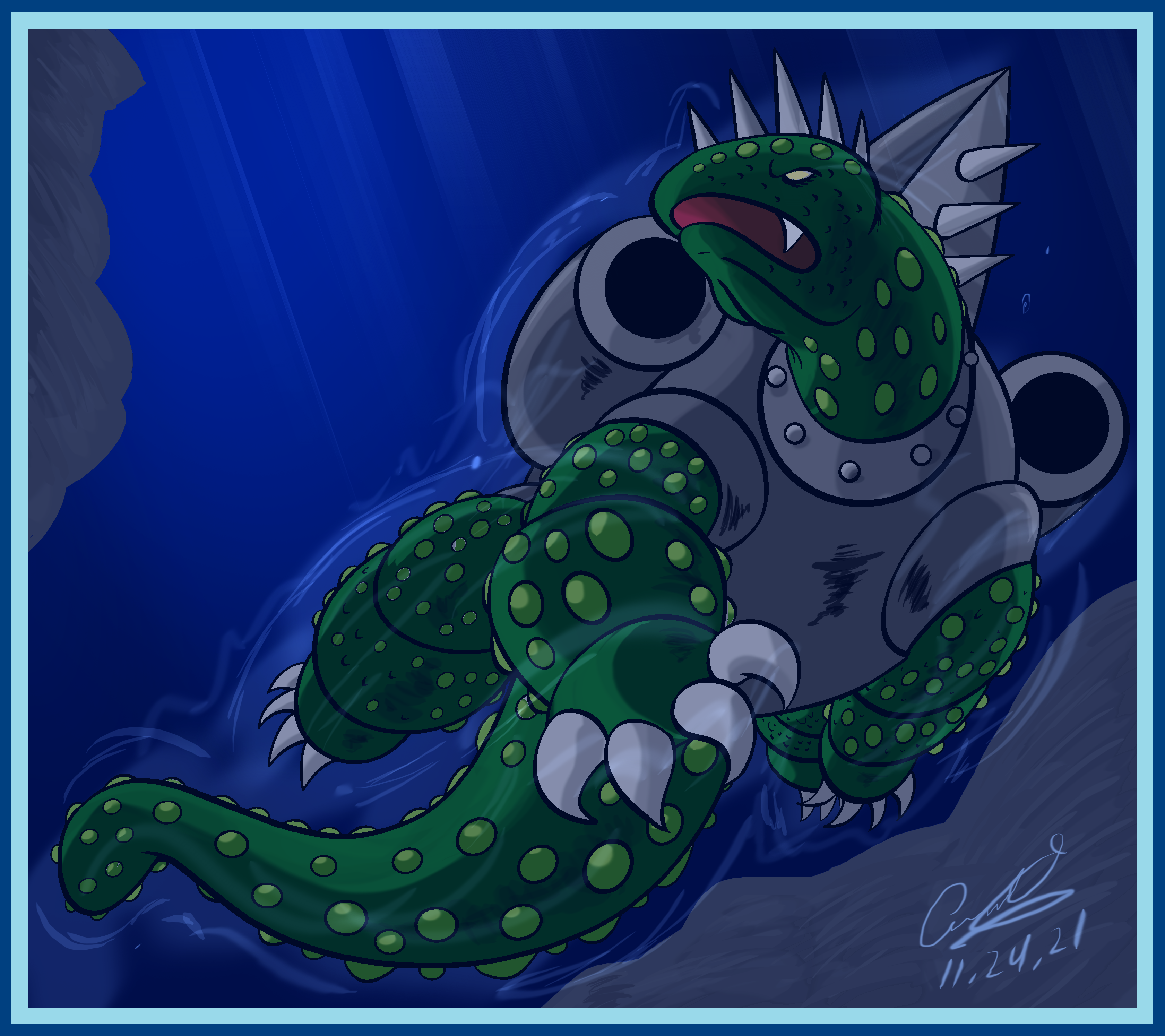 The 71st Monster by order appearance, Wagu Wagu was a Vega Beast who appeared in Ep.66 of the UFO Robot Grendizer anime; it was an aquatic reptile monster, with a gray and green colored scheme; it had spikes on top of the head and the head, legs and tail were cover in light green warts. It weapons where Torpedoes, full with grappling hooks, fired from the two large launchers on the side, as well it used its tail to beat the enemy.

In the Midst of the New Years celebration, a massive marine earthquake strikes close to Japan having a new volcano emerging from the sea, a portion of the Vega Base is lifted along with it to the surface; Gandal and Zuril send Wagu Wagu to destroy it and a ship passing by, but not before sending a message. Koji and Maria arrive Double and Marine Spazers searching for the beast and survivors; Maria dives and takes photographs of debris when Marine Spazer is tangled by Sea Weed; Koji dives to provide assistance when he is attacked by Great Whites Sharks, which he discovered are Cyborgs, one of them cutting his leg. Maria blast some of the Sharks allowing Koji to help her escape; Wagu appears to stop Koji, but again, Maria covers for him and the Spazers return to Base. Realizing is only a matter of time, Gandal and Zuril plan a trap for Grendizer, by having it been crushed by the underwater pressure.

At the observatory, Umon studies the photos Maria brought and decides to explore the site, using a ROV which Maria delivers on the Double Spazer; Exploring the underwater area, the ROV finds intact Structures before Wagu destroys the Probe. Realizing that they found the Vega Base, now Duke and Hikaru take off on Grendizer and Marine Spazer to attack it, but Umon warns them Grendizer has a pressure limit of 400 meters.

The duo arrives and dives; they are immediately attacked by Sea Weed traps and large Cyborg Saw Sharks, the latter smacking onto the cockpit windshields. Grendizer disposes of these with Double Harken, Space Thunder and Double Boomerang. They take cover from more Torpedoes, but are attack by Wagu, who bashes them with its tail; as they attempt to escape, the Monsters fires grappling hooks and the Mecha and M-Spazer are stuck on the ocean floor, with the Monster burying them under tons of rock. As the situation is reported, Umon confesses no present method to rescue them exists at such depth, all hopes of salivation now lay in the hands of Duke and Hikaru alone. As the hours go by with Wagu keeping eye on them, matters go from bad to worst, as water sips through Marine Spazer's crack windshield and oxygen supply is at a low, putting Hikaru at risk of either drowning or asphyxiation. Maria and Dambi pray to God to for a miracle, the latter doing barely naked under a cold waterfall as it begins to snow. With time running out, Duke suggests to have Grendizer and M-Spazer to take off at full power – the plan works, and the heroes break free from their tomb.

Wagu tries to catch them again, but Grendizer catches it first and flies the Beast to the volcano, dropping it into the crater; the Beast explodes on contact with the Lava; the magnitude of the blast destroys the Volcano island in the process (similar reaction when one eats too much heavily condiment food). Duke and Maria return home, to continue celebrate the New Year's with the others.

P.S.: if you thought the monster had a funny name, then I'll let you know one of the two in the next Monster Bio is called Ragu Ragu; and all I can think is double dipping into Special Meat & Tomato Italian Sauce. Also, it didn't escape me that when I saw Wagu appear for the first time, all I could think was the Beast from 20000 Fathoms was making a cameo, if you removed the fin and metallic parts.