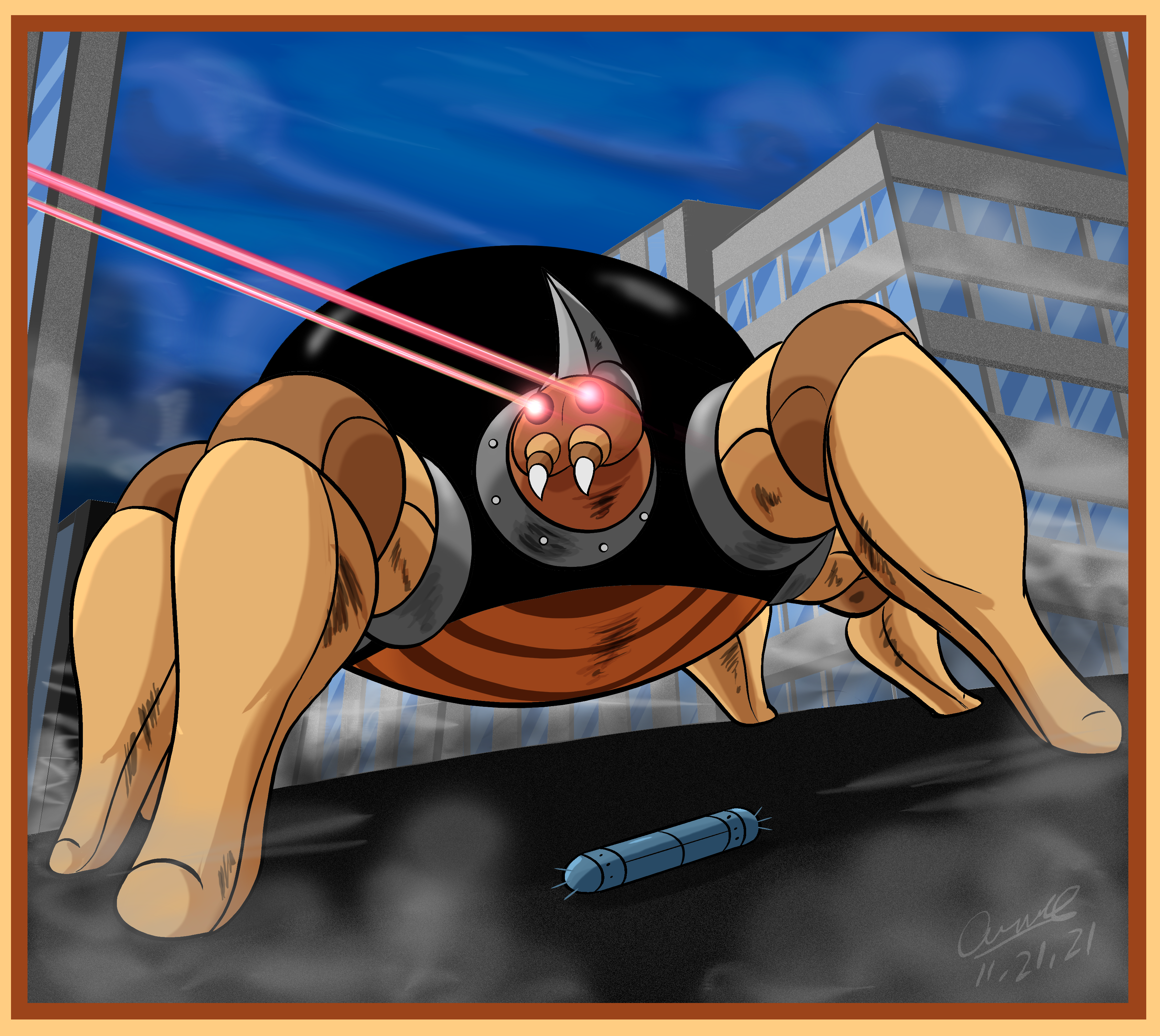 Vega Beast Gudo Gudo was the 69th Monster by order of Appearance featured in Ep.64 of the Anime UFO Robot Grendizer; it resemble a Spider, albeit with Six legs rather than eight, with a Black, Brown (tones from light, standard and dark), and yellow color schemes. Gudo sport a blade on top of the head, which generated an energy shield to block attacks, as well fired pink laser beams from its eyes and web strings from the mouth; it was able to carry a Vegatron Bomb in it.

After testing a Vegatron Bomb on an island with the same dimensions as Tokyo, the Vega Invaders choose to use one on the city; Grendizer and Marine Spazer (Koji piloting it), arrive to investigate the site of the blast, detecting Vegatron Radiation, allowing the villains to send Gudo Gudo to Tokyo while Duke and Koji are busy with Midifo attackers. Gudo, followed by Hikaru and Maria on the Double and Drill Spazers makes it to the center of the city, where it spews a Vegatron Bomb, laying in the middle of the street.

Gandal then calls and makes its demand to have Duke and Grendizer be surrender or the city will be destroy in 5 minutes. The team refuses and decide to fight and retrieve the Bomb; with time running out, the Team takes on Gudo while trying to retrieve the Bomb: The Team is unable to break through the Beast's energy shield and in the fight, both Double and Driller Spazers are Shutdown, but not before creating a crater with their missiles, making the Beast fall through. Grendizer Ejects and struggles with the Monster for control of the Bomb while Koji lands to check on Hikaru, who had injuries, then he takes control of the D-Spazer.

Duke passes the Bomb to the JSDF nearby and Helicopters lift the Bomb away, but in their attempt one chopper is shutdown by Gudo's Eye Beams, leaving one to deal with the whole Load. Grendizer and Koji (now on the Double Spazer) force the beast into the crater, Duke then fully dispose of Gudo with Space Thunder. Grendizer then connects with D-Spazer & catch the bomb as if falls; Duke jumps into Spazer & takes off to orbit at high speed, throwing the Bomb in space, exploding; Grendizer is caught in the shock wave & crashes in a mountain.

Later, Duke wakes up in the Medical Facility of the Space Center; as the Sun sets, he stands up and he walks to the window to see the City of Tokyo, though not visible from the lab's position, something Koji thus mark; Duke exclaims he can see it, as it has kind people in it.

On a side note: a funny situation early in the Episode is Maria divining the future with Cards and state Koji would never have a girlfriend as she would not allow anyone else to have him but herself, practically confessing to him.

SHE WOULD BE GREAT FRIENDS WITH SAYAKA YUMI!!