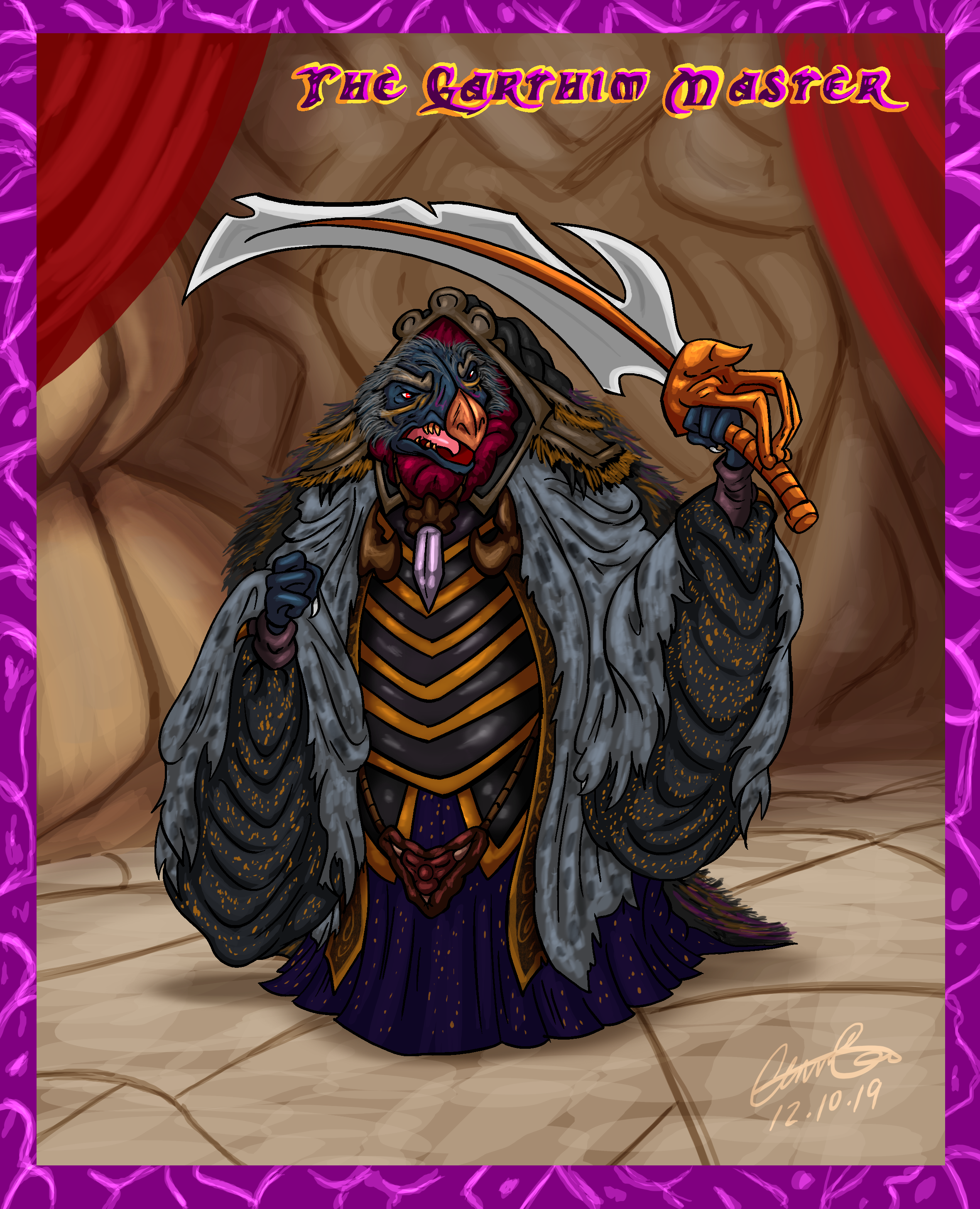 The dark brutal half of the UrSkek Healer UngIm, and counterpart of urIm the Mystic Healer, skekUng was called back to the castle after the events of the 2nd battle of Stone in the Wood, to succeed the late General skekVar and become all Master of the Garthim Army. Under the Emperor's command, he lead the Garthim Campaign to exterminate the Gelfling Race. skekUng was the strongest (after the Emperor) and most robust of the Skeksis, always speaking with a loud deep bellow in his voice, and love to use Anger and Brute force to achieve victory in his Military Campaigns, but he was however odd among the other Skeksis as he would assume positions of Geometric Harmony. His Robes were cover in armor, which rattle with each step, and also wore spurs which cause sparks when walking on the stone floors of the castle (How did this bastard didn't go up in flames while wearing likely flammable silks is beyond me?).

He had an alliance with skekNa the Slave Master and skekTek the Scientist.

During his tenure as General he developed a deep hated rivalry with skekSil the Chamberlain, as his position made him another successor to the Throne, and he was very open about it: when the chance for the throne finally came after skekSo's death, he defeated Chamberlain in trial by Stone, ascending as the new Emperor and banishing the Whimpering Chamberlain. His rule wasn't save though, as he soon discovers Jen and sent out his Garthim to hunt him down to avoid the Gelfling Prophesy, to no success, and unbeknownst to him the Treasurer and Ritual Master were secretly plotting to dethrone him (in the Novel). Not long after the death of the Scientist, he and the other Skeksis gather in the Crystal Chamber for the Great Conjunction, but their hopes of Eternal life were dashed when (after Kira's sacrifice) Jen healed the Crystal and restore the Mystics and Skeksis back to their true UrSkek selves. UngIm resurrected Kira and departed Thra with the 7 other surviving UrSkeks, as their new leader.

In Power of the Dark Crystal, skekUng is reborn when the Fireling Thurma cracks the Crystal, causing a 2nd Division of the UrSkeks and plunging the Castle into chaos, but his 2nd chance at freedom lasted a few days before the Crystal was restored and he and the 6 surviving other Skeksis are reunited with their Mystic Counterparts.