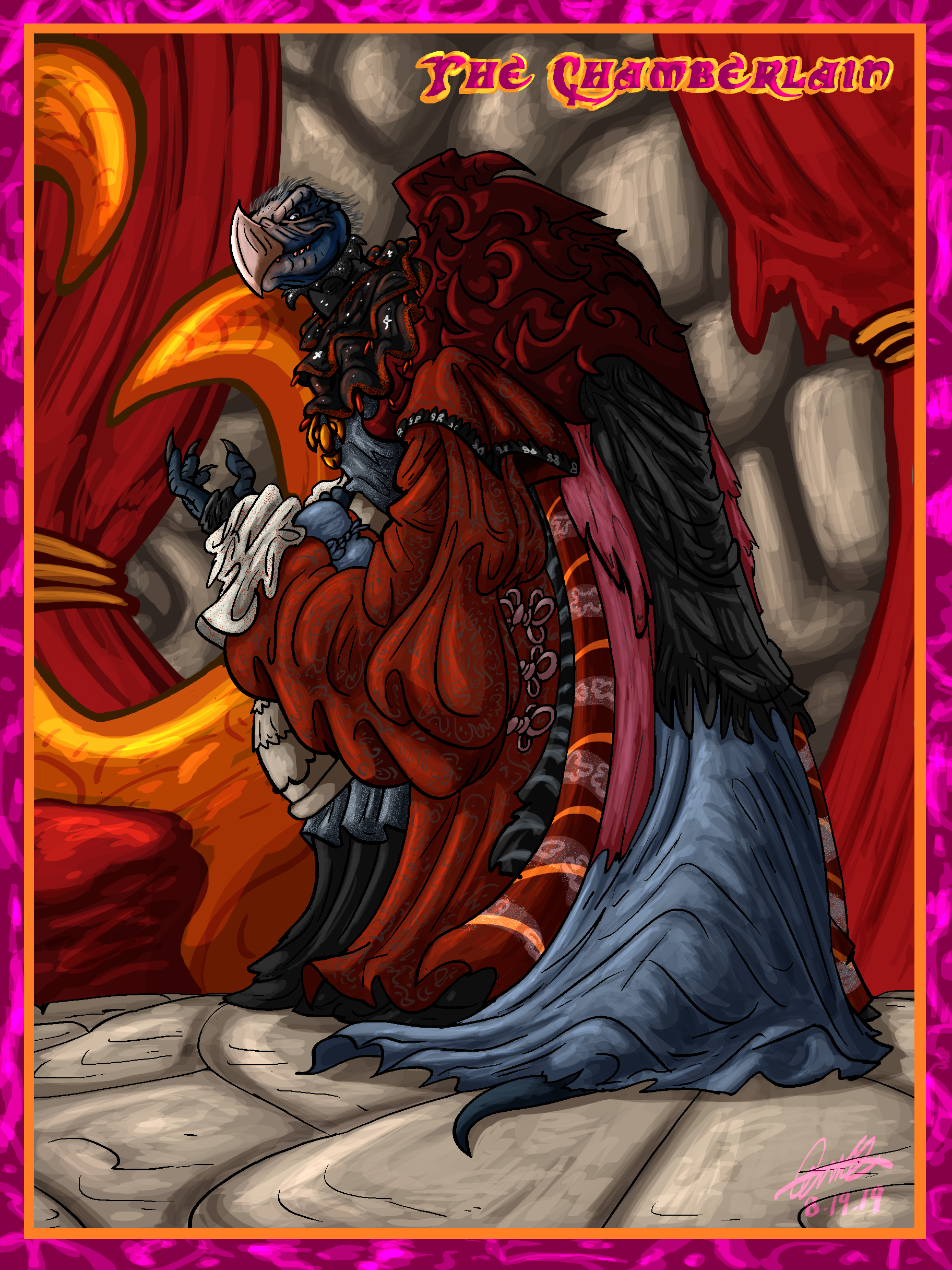 skekSil was the Chamberlain, and the counterpart of urSol the Chanter, and superior to the Treasurer skekShod, as well, he was the Secretary of the Office. Along with skekSo, skekEkt and skekAyuk, they form the largest and longest faction in the Imperial Court. Recognizable by his poisonous smile, constant scheming and obnoxious whimpering, the Chamberlain hope to get to the Throne with machinations. He was hated by all the Skeksis, but none more so than by skekUng the General/Garthim Master.

When skekSo died, he made his move to take power, but was challenge by the General, ironically, it was skekSil who chose the challenge, Trial by Stone, which requires strength to win, and skekUng won by tearing the stone apart, and skekSil getting banished. His last hope to vindicate himself and return back to power was to capture the two living Gelfling (Jen and Kira) before they could fulfill the prophesy, but was rejected by the two, and submitted himself by force: knocking Jen in a cave in after been stabbed with the shard and taking Kira to the Court. skekSil was re-instated, but in the end, Jen did survive, achieving the prophesy after Kira's sacrifice, and he along with the other 7 surviving Skeksis were absorb by their UrRu counterparts, been reborn as the UrSkek SilSol.

During the Prequel Age of Resistance, the Chamberlain, by this point been Counsel to the Emperor, is single handily the most responsible for all the unfolding events of the show: when the Crystal could no longer prolong the life of the Skeksis, it was Chamberlain who suggest the Scientist to steal essence when the former reverted by accident the Crystal's energy field, causing it to take life rather than give it. He also comes with the idea to blame Rian for Mira's and warning the other Gelfling to not Dreamfast with him since he was mind sick and the madness was contagious via dreamfasting.

But when the attempts to capture Rian fails, the Chamberlain loses his position of Counsel to skekVar the General, who happily beats him. Chamberlain then hires skekMal the Hunter to do the job for him, and is able to take the fugitive back to the castle, negotiating with him to avoid a war, only to lose him again when Gurjin and Naia show up and rescue him, crashing his personal carriage in the process. When the situation goes from bad to worst and the nature of the Skeksis comes out to the light, Chamberlain is attacked and ran out by the inhabitants of Stone-in-the-Wood, returning to the castle by foot, only to learn the Guards had revolted and his fellow lords were feasting on too much essences. skekSil blames the chaos on skekVar, who had killed the All Maudra by then, informing them of what had happened in Stone in the Wood, but is further humiliated by them and the General elevated further more and the Chamberlain is ran out of the Dinning Room.

Chamberlain then proceeds to concoct a plan to get back to the Emperor's side by weakening the General in small steps: first changing his essence with a fake one with the help of the Gruenak slaves, holding the real one for later. skekSil's then earns the wounded General's trust by saving his life from Tavra and giving the real vile of Gelfling Essence originally meant for him. Thankful for saving his life, the two ally in the most severe time for the Skeksis and Chamberlain presents a new plan to skekVar which would lead to the birth of the Garthim Army. This succeeds and Chamberlain is restore back on the Emperor's side.

Later, the Skeksis gather in Stone in the Wood, to quash the Rebellion: Chamberlain convinces the General to challenge Rian on a duel, which he loses and gets stab and his essence taken by the Shard of the Crystal, unbeknownst to everyone, adorning the handle of the Dual Glaive, weakening him. In the middle of of the battle, Chamberlain stabs a wounded skekVar in the chest, killing him (and urMa in the process), taking his rival out.

Despite this, the battle ends in defeat for the Skeksis and the additional deaths of skekMal and skekLach. skekSil and the rest of the Skeksis retreated to the castle, only to celebrate the Scientist greatest achievement: the Garthim.

One hundred years after the events of the Dark Crystal, skekSil is reborn along with the other 7 Skeksis thanks to the actions of the U-Mun Thurma, who crack a shard from the Crystal, causing a second Division for the UrSkeks. skekSil is banished once more, been blame for Skeksis defeat and hunts both Thurma and Kensho, a banished Gelfling on the way to the inner Thra to save the Inner Sun. He managed to attack Jen and his entourage of soldiers and Garthim, taking the Scepter of Office and controlling the Garthim, though he loses the horde in the hunt. Catching up to the fugitive, he kills Kensho, but Thurma sents the shard to heal the Crystal, the flying pieces of the shard torn the Chamberlain apart, killing him and urSol the Chanter. Their deaths left 7 Pairs to be reunified in the end and the surviving UrSkeks leave Thra with a rejuvenated Jen and Kira.

Despite this, the Spirits of the Chamberlain and the Chanter now live on trap in the Prism and a resurrected Kensho encounters them when facing another near death experience.

jokes aside, this is an excellent work!