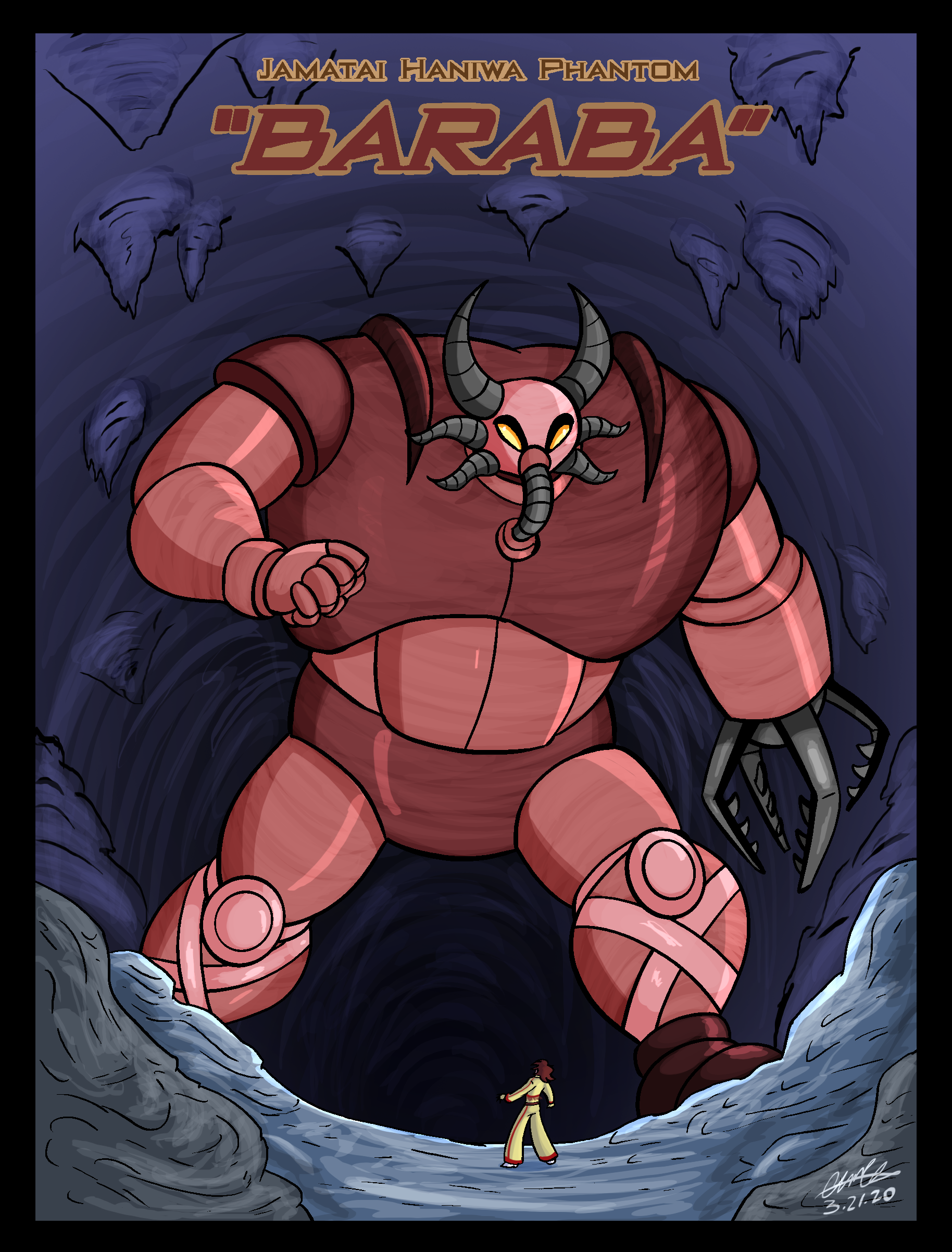 Posting another Haniwa, because I made a minor fuck up the last time I posted a Batch of the Phantom Bastards.

Haniwa Phantom Baraba was the Monster of the week on Ep.14 of the Kotetsu Jeeg anime. He was a very standard robust build Phantom, his powers been Driller Claw for a left hand, Super strength and Burrowing abilities, though the later is standard for all Phantoms to dig. It was a brown in color with the tunes variation from light to dark, it had yellow eyes, It's horns were black and side spikes where gray, and had a trunk that connected to its chest (to what end? I have no clue!), with two blades in its shoulders.

When Hiroshi becomes very emotionally distant to the reality of him been a Cyborg, to the point of been indifferent to his family and friends, Queen Himika takes this a chance to destroy both Hiroshi and Build Base, and sends Amaso for the mission. (So much for making the promise to fight for the ideals of Peace Prof. Bose died for!). Kikue (Hiroshi's mother) tries to convince Prof. Shiba to talk sense into him, he express that it would be best to not bother him, as he is beginning to accept his reality of been a Cyborg (Because that's the sensible thing a father would do!).

Uzuki and Mayumi go after Hiroshi, finding him racing his Formula 1 car at the tracks, when Amaso and his men attacked the girls. Hiroshi was hesitant to help them, transform in his Cyborg form and defeats the Jamatai Warriors, and bails. Uzuki tries to talk some sense into him later, but he rebukes her and she leaves for Build Base as Orochi attacks hidden in a thunder cloud, while Hiroshi is surprise from below by the Phantom Baraba. Uzuki takes off on the Shooter to fight the Orochi, but is captured and unable to help Hiroshi as the Phantom drags him Below, it is spotted by Don and Pancho on the MechaDon and dig their way after the Monster, who has Hiroshi trapped in a chamber attempting to kill him, but is save by MechaDon on time. The Phantom tries to destroy them both, but the Mecha avoids its strikes.

Uzuki, having freed the Big Shooter from the Orochi, flies to Hiroshi's last position and fires a tractor beam, the MechaDon is lifted, with Baraba holding on to it as they are lifted out. Releasing the situation (and been like the 100th time he was a douche) Hiroshi takes his gift seriously and jumps. Uzuki releases the MechaDon with the Phantom, to fire the Jeeg parts, Hiroshi transforming and assembling Steel Jeeg.

The fight between Baraba and Jeeg was brief, the Mecha ripping off its left arm with the Spin Storm. He then attracts it with Magnet Ropes and tries to crush it, though Baraba punches him and escape underground. Jeeg goes after him with Drill Missiles, and drags him out impale in a driller. Jeeg then throws him and finishes the monster with Spin Storm. Jeeg flies back to the base and attacks the Orochi, forcing Amaso to order retreat.

Afterwards, the repairs and upgrades to the Build Base were completed, and Hiroshi and his friends are invited for the celebration.