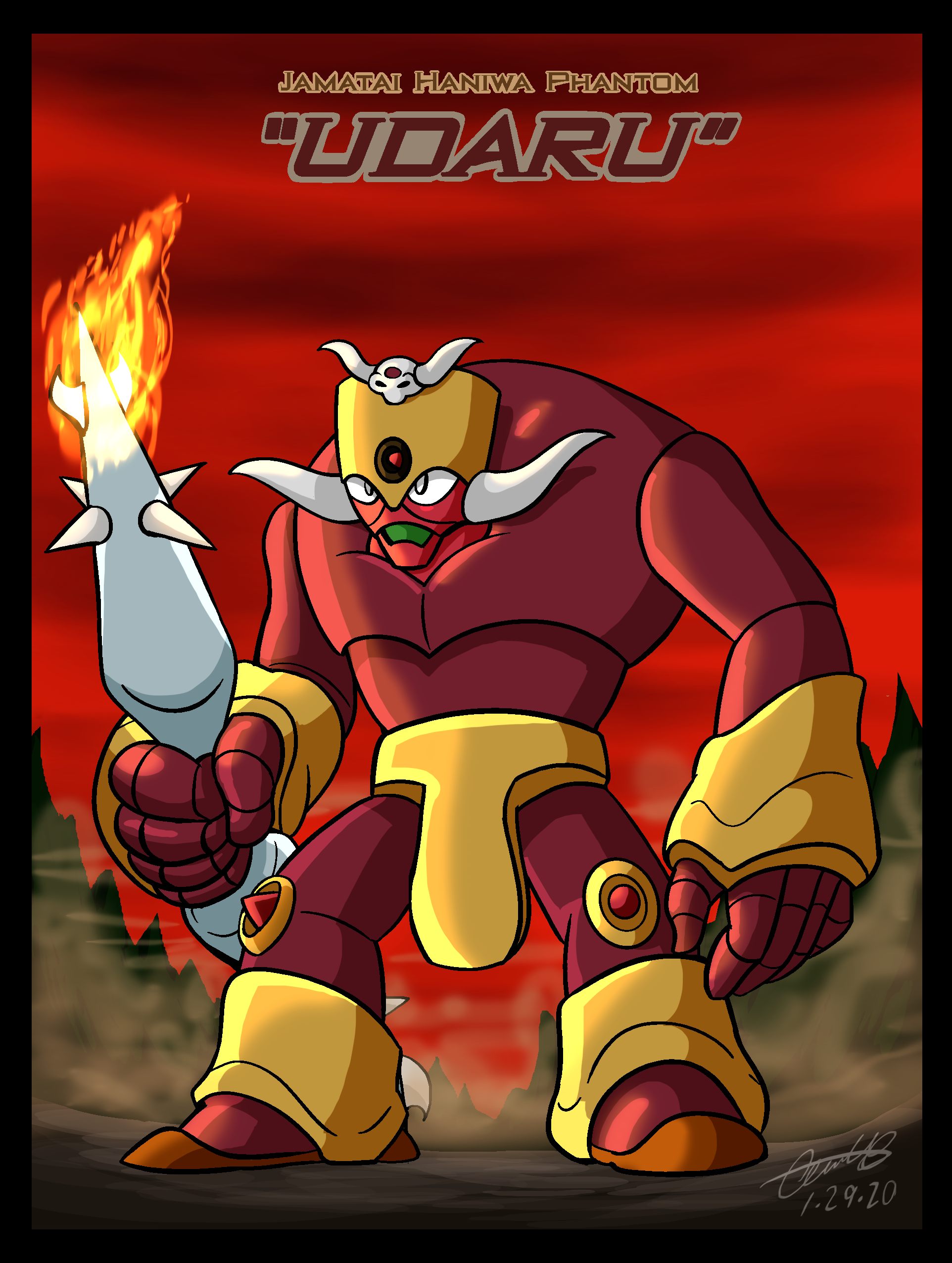 Haniwa Phantom Udaru was a humanoid type Phantom from Ep.13 of the Kotetsu Jeeg Anime. It was Dark Red in torso, arms and legs, with Bright Red face, Yellow color Gauntlets, Skirt, Boots and Helmet. It was adorn with Horns and had a horn skull on top of it, and yellow kneecaps. Its weapon of choice was a dual spike, adorn with smaller blades and spikes on each end, and could light up on fire. It also would use this to deflect any enemy attacks.

The Episode starts with a commercial Jet Liner been shutdown by the Orochi fortress and following up the events of the previous story line, where Hiroshi is in the lab, demanding answers from his father about the truth of his powers, though the latter is reluctant to tell the truth, telling him to make good use of it. The conversation is cut short when the Prof. Dairi and Miwa show up to inform him of the incident, and the disappearance of Prof. Bose, who was to attend a world peace conference, with the suspicious been put squarely, correctly, on Himika. Bose wakes up in the Jamatai Kingdom in front of the Queen herself, telling him he was save to be a messenger for the Jamatai at the conference, demanding her rightful rule over Japan and explaining a bit of the backstory, putting the end of the reign on Warriors with Armor, which would later found Japan. Himika then tells she is willing to live in peace in exchange for the Chrysalis to be returned and to stop the Resistance from Jeeg and the Build Base.

Prof. Bose arrives at Build Base, to the surprise of everyone, and explains his whereabouts and Himika's message. The news shocks everyone, as the Queen and the Kingdom are responsible for many deaths, including Hiroshi father, but Bose takes a stand of principle, willing to give up his life for non-violent solutions to peace. Bose leaves and Miwa follows on the Big Shooter. The Professor arrives to met up with two Himika's Generals on the Shooter, and angry about the Base's answer, the two dispose of him by blowing up his car, mortally wounding Bose. The Big Shooter shows up and the Orochi confronts it, Hiroshi arrives to hear Bose's last words before his death. As the Big Shooter is shutdown, the MechaDon arrives right as the Phantom Udaru comes out, and disposes of the Weak Robot. Orochi arrives to attack Build Base, which unleashes the Flying mines and the laser canons to defend itself, though these failed to stop it.

Meanwhile, Hiroshi makes it to the crashed Shooter and unconscious Miwa when the Udaru shows up. As his father makes contact with him he finally tells him the truth, revealing Hiroshi to be a Cyborg. While shock by the revelation, Hiroshi remembers the last words of Prof. Bose and chose to fight. He transforms into his Cyborg form, knocking Udaru briefly and boarding the Shooter on time to avoid been crushed by the Phantom's weapon. Miwa wakes up and takes control and Hiroshi jumps out to assemble Jeeg.

Jeeg and Udaru fight, with most of its attacks failing on the Beast. Jeeg calls and uses the Mach Drills to finish off the Udaru. Jeeg and the Big Shooter fly back to the Build Base to repel the Orochi, causing damage with the Mach Drills, forcing the villains to retreat. After the battle Dairi leaves to the Peace Conference, taking Bose's place, while Hiroshi promises to fight for peace in the late Professor's memory.